11/16/2022 at 5:00 p.m. by Philipp Sattler – Secretly, quietly, the developers in the pre-patch for WoW: Dragonflight have revised the heirlooms and made them absolute BiS items on the level path again. This is due to a new scaling that gives the heirlooms a higher item level.

The second part of the pre-patch for WoW: Dragonflight brings two important contents into play: the new class of the caller and the pre-event for the upcoming expansion. But apart from the “big” content, the patch also has a few nice updates in its luggage. This also includes the revision of the heirlooms, which probably very few of us had on the screen.

Because since the heirlooms no longer give a bonus to the experience gained, they have disappeared a bit from the radar for most players. That’s no wonder, because they hardly offer any advantages. No bonus XP, not really higher item level than the quest or dungeon rewards and set bonuses that are hardly worth mentioning,

The only advantages were that you didn’t have to worry about it. Dressed up at the start of leveling, banged on enchantments, grabbed transmog over it and didn’t think about it until endgame.

A collector’s figure for 1,110 euros: This new statue of Alexstrasza from WoW: Dragonflight makes many people spit. Why is she so expensive?

WoW: Dragonflight: 20 minutes for 8 new mounts – Dracthyr is worth it for everyone

The new Dracthyr race brings us not only the Rufer class for WoW: Dragonflight, but also eight new mounts for collectors.

With the second part of the pre-patch, the developers have now screwed around with the scaling of the heirlooms and buffed them properly. They’re no longer on par with any quest rewards, but wipe the floor with whatever other gear you can get.

For this, the developers have raised the item level of the heirlooms and made them much more linear. At some tiers, heirlooms are now almost three times the item level they were before. The scaling is changed in general by shifting the chromie time (10 to 60 instead of 10 to 50 as before), but the effect is only softened by this. 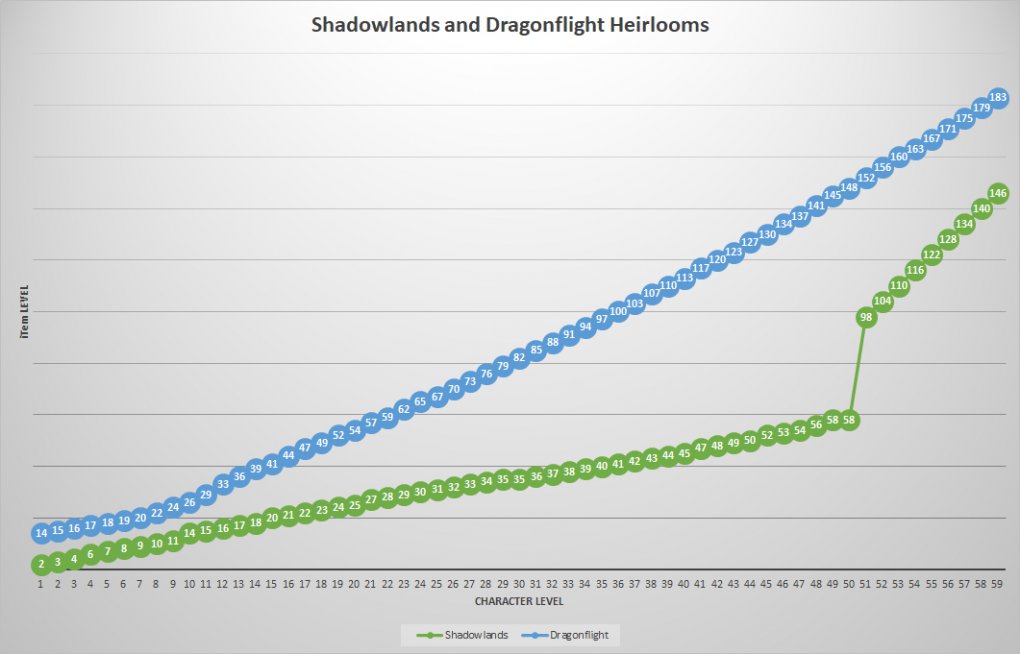 Also interesting: At the pre-event you can dust off an heirloom trinket!

With the new leveling scaling, the heirlooms are the best item to wear in almost every situation. Of course, we assume that you work your way through the levels in the normal way. If you occasionally make trips to heroic or mythical raids from old expansions, you might find better items there, but very few of us are likely to do that.

Immortality now available through Netflix: free for members, with the mobile app

Pentiment exists only thanks to Xbox Game Pass: Obsidian speaks

IOS 16 has a bug that seriously compromises users’ privacy

In premiere: 6 series and movies arriving this week