Mastodon: 200,000 registered users in just one day after the leak from Twitter for the #RIPTwitter trend

More than 200,000 people have joined the social network Mastodon in one day only because of the fuga on Twitterlegata all’hashtag #RIPTwitter, which quickly became a trend on the Twitter social network. This is another effect of the new governance established by Elon Musk, which with its abrupt and childish ways has led many employees of the company to resign (it seems that 75% of those who remained after the first layoffs have rejected the new conditions and have preferred to accept the good exit) and has increased concern among users.

Musk took control of Twitter on October 27, 2022 and many did not appreciate his abrupt ways, his rapacious proposals, such as that of paid blue checks for verified users, as well as the willingness to give space to all those contents that old leadership had banned (just recently removed the ban of Andrew Tate, ousted for saying that women are responsible for the rapes they suffer). The most natural landing place for the defectors was Mastodon, a shared social network founded in March 2016 and based on requests. 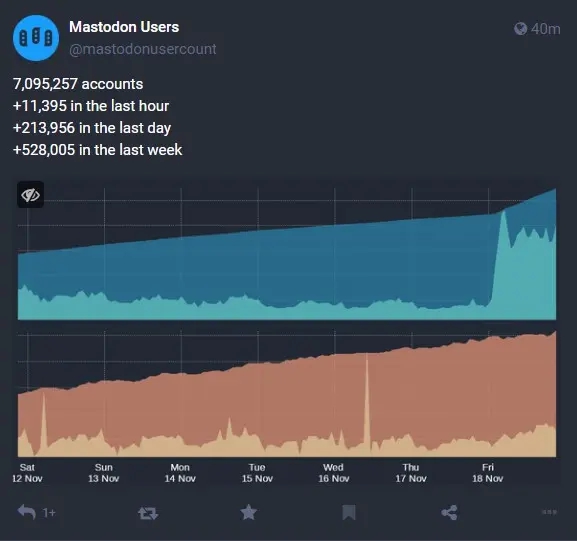 The most subscribed Mastodon instance was Fediverse. As you can see from the graph, in the last 24 hours Mastodon had 213,956 new subscribers. More than 500,000 new accounts have been registered in the past seven days, for a grand total of more than 7 million.

Spider-Man: Miles Morales - How was the launch on Steam?

Threatened by rising waters, this country has found the solution not to disappear

Krivtsov is injured. Shakhtar had a forced substitution in the match against Dnipro-1

The World Beyond the Canvas: Greening in Genshin Impact 3.2 – How to Take a Photo

On our own behalf: Computec Media is looking for Audience and Content Development Manager / Head of / Director (m/f/d)

Tomb Raider and Legacy of Kain: the story of Crystal Dynamics in the Noclip documentary