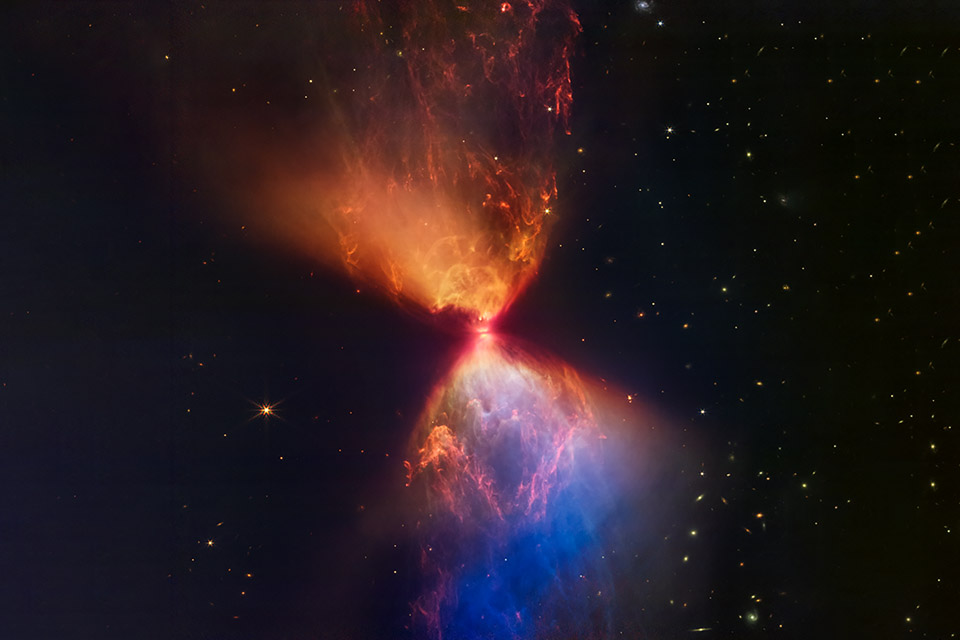 NASA’s James Webb Space Telescope revealed on Wednesday (16) details of the beginnings of a new star, in this case the protostar L1527, which is 430 light years away from Earth. This object, which appears encapsulated in a gigantic dark cloud of dust and gas, had its image captured by the observatory’s near-infrared camera (NIRCam).

The object in formation, that could become a star if it has enough mass to do so, is hidden inside the “neck” of this “fire hourglass” formation. In the image, the protoplanetary disk appears as a dark line between the two “compartments” of the hourglass, which are the leaked material of the protostar colliding with the surrounding matter.

What does the James Webb image show?

The image shown by James Webb in this fantastic photo is a protostar gaining mass and its core gradually compressing, increasing the temperature to reach the stable nuclear melting point, an essential condition for the star to form and generate its own energy.

The far-infrared glow indicates that L1527 is still a relatively young body, “only” 100,000 years old, classified as a class “0” protostar. That means she still has a long way to go before she acquires her full star status. Its shape is still a small, hot, puffy cluster of gas with a mass between 20% and 40% that of our Sun.

As dense dust and gas are drawn towards the center of the object, they form what is called an accretion disk. Although it appears as a small dark band, the disk is almost the size of our planetary system🇧🇷 Some of this material will start new planets. That means “this view of L1527 provides a window into what our Sun and solar system looked like in their infancy,” says NASA.

Black Friday 2022: complex and rare, this LEGO Horizon is back in stock and on sale!

Call of Duty Warzone 2.0 is blocking those who have not bought Modern Warfare 2

Beautiful in your sleep? What experts say about "night creams"