In this calendar year there have already been two Prime Days at Amazon. However, only Prime members could save a lot of money there. Now the next opportunity to save a lot opens up. In keeping with the cold season, in many places it is time to turn on the heating again. However, increased energy costs make heating much more expensive. We show how you can get a warm home with smart thermostats and Amazon Alexa not only cleverly but also cheaply. After all, you can only save up to 18 percent on smart thermostats for a short time.

How to get a warm home cheaply? 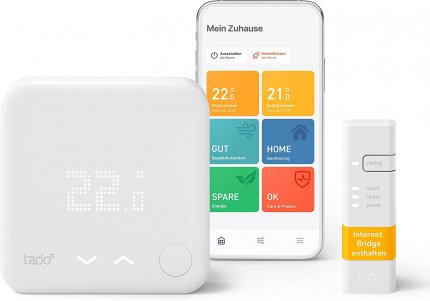 Last year there was record inflation in Germany, so consumer prices have risen significantly. The rise in prices for electricity and gas is particularly dramatic. The Ukraine war has been raging since February 24, which has not only claimed many lives and driven people from their homes, but also has economic consequences. Germany obtains a large part of its natural gas from the Russian state-owned company Gazprom. Gas is delivered to the Federal Republic via the Nord Stream pipeline, although the delivery volume has recently fallen sharply. However, millions of people heat their homes with gas heating. Smart thermostats are ideal for heating in an energy-saving manner. If you want, you can store routines, for example, so that the room temperature is automatically lowered when you are absent.

One manufacturer of smart thermostats is Tado, which offers three radiator thermostats in a set. Various adapters are already included in the scope of delivery in order to be able to attach the thermostats to the radiators. A compatibility guide including illustrations shows which radiator valves the thermostats can be mounted on. You can save 18 percent on Black Friday, so you can buy the 3-pack of Tado radiator thermostats for only 199.99 euros. There is a free smartphone app for convenient control, which not only offers individual room control, but also offers intelligent schedules. If you want, you can also display an energy saving report. In addition, thanks to location tracking via the local weather report, the app can proactively control the smart heating and adjust energy consumption in advance.

No radiator in the apartment? What do you do with underfloor heating or a gas boiler?

If you don’t use radiators but underfloor heating, you can also retrofit a smart control. This requires replacing wired thermostats, such as the Tado Smart Home Thermostat (wired), which is available with a 23 percent discount for just €169.39 on Black Friday. Anyone who uses a gas boiler as a thermal power station should also use this set to replace their wired thermostats.

Does it matter? – How thermostats & Co. become smart

To control the smart thermostats, a so-called Wifi bridge is required, which connects the respective thermostats to the router. For example, the radiator thermostats from tado require a starter kit from tado including a bridge, which can be bought in the Black Friday offer with a discount of 18 percent.

In order to be able to control several smart end devices from different manufacturers in one home, the new Matter standard has been in existence since October 2022. Matter integrates Bluetooth LE, Wi-Fi and Thread as possible transmission protocols for smart end devices. In this way, products from different manufacturers should be able to communicate with one another. Since October 4th, 2022, Matter has been available as a license-free standard on an open source code basis in version 1.0 for smart speakers and lighting, among other things, further smart device categories will follow in future Matter versions. To make it easier to set up smart end devices, new IoT devices coming onto the market will have a QR code that can be easily scanned with a smartphone camera. After the connection has been established, a controller checks a device certificate DAC and only establishes the connection to the smart home network if the certificate is valid. After a successful network connection, a new certificate called Operational Certificate is created locally on the respective IoT device, which is checked using the additional root certificate. The devices only trust each other and establish a connection if the root certificates match. All communication between Matter products is encrypted. This is how smart home devices should be secured. Using blockchain technology, firmware updates are to be stored decentrally and should be easier for users to access. However, writing rights are restricted so that not just anyone can upload new firmware, but only certified bodies such as device manufacturers. Incidentally, Amazon has already announced software updates from December to make Echo speakers and Echo Show Matter compatible. 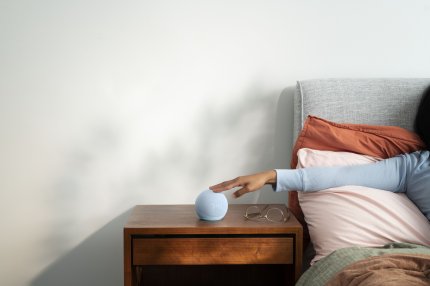 Amazon Echo Dot 5 has a touch sensor on top and a new speaker for clearer voice reproduction. Source: Amazon

In addition to the app connection, smart thermostats can also be controlled by voice assistants such as Amazon Alexa. So if you own an echo speaker, you can control the heating directly via voice command. In keeping with Black Friday, Amazon is offering the brand new, small Echo Dot (5th generation) at a hammer price of only 34.99 euros. Alexa users can save a whopping 43 percent and get the latest smart speaker. On request, the Echo Dot offers a clock display that can show the time as well as the temperature.

With the fifth generation of the Echo Dot, users should benefit from improved sound, with a new broadband driver and a new speaker. Amazon has placed the focus on clear voice reproduction and a stronger bass. All new Echo Dots come with fabric made from 95 percent post-consumer waste. However, the new Echo Dots can do even more. For the first time, Amazon has installed the self-developed ARM chipset AZ2 Neural Edge, which has so far been used in the Echo Show 15, which costs around 200 euros. With this chip, a quad-core processor moves under the hood, which processes the voice output directly on the Echo Dot.

Customers have the option of buying smart thermostats, for example, on Black Friday, but paying for the purchases later. Amazon customers will then receive the monthly statement on January 1, 2023 and can pay within 14 days by bank transfer or SEPA direct debit. Customers without a Prime subscription can also shop on Black Friday. However, if you have a Prime membership, you get 30 minutes early access to many offers. The Prime subscription currently costs EUR 8.99 per month or EUR 89.90 for a 1-year subscription. If you are not yet a member, you can try the subscription for 30 days free of charge and this also gives you access to Prime Video and PC games in Prime Gaming. Amazon Smile allows customers to choose whether to donate a portion of the sales proceeds to a nonprofit organization. In the Amazon app for smartphones, the donation feature can be activated manually in the Programs and functions menu.

Honestly, 99% of all Amazon Black Friday deals are junk. But what are the 50 highlight deals among the thousands of products?

Anyone who is interested in Black Friday 2022, in addition to smart thermostats for devices with Amazon Alexa and Prime Video such as the Fire TV Stick, Echo Dot, Echo Show, Kindle or Ring, should also look at other current savings offers from Amazon, Alternate, Media Markt and Co don’t miss our Daily Deals. Our PCGH technology guide portal provides well-founded purchase advice for technology products. Prices of the coveted Geforce and Radeon graphics cards and other technology products can be checked with the PCGH price comparison.

Source: Martial will go to the 2022 World Cup instead of Benzema