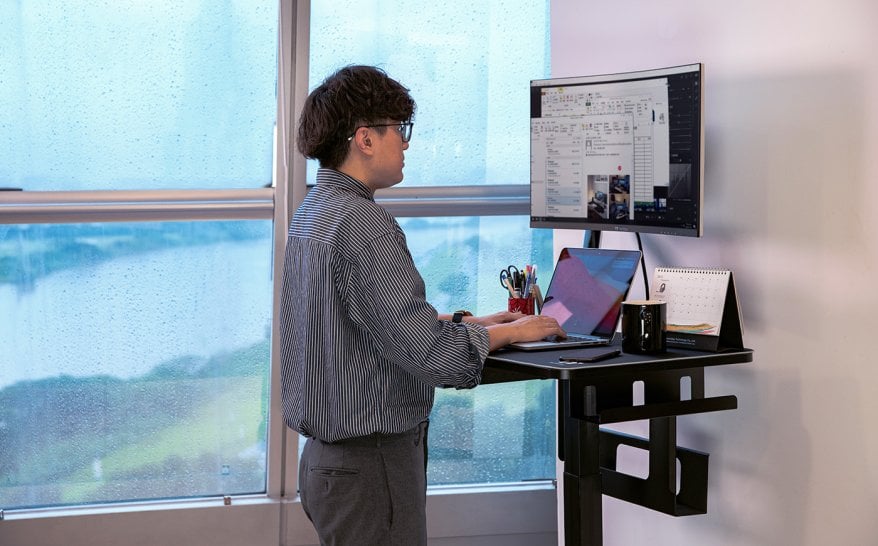 When it comes to e-sports, the majority of players probably first think of well-known MOBAs, battle royales and first-person shooters such as CS:GO, Dota 2, PUBG: Battlegrounds or League of Legends. However, e-sports can also be implemented athletically like normal sport, for example on a bike. The manufacturer Thermaltake from Taiwan, who has designed a gaming desk with the Cycledesk 100, is now stepping into the breach especially for this case, but not only. which is aimed primarily at cyclists among the e-sportsmen. Incidentally, this should also be suitable for normal gameplay or work on the computer.

Cycledesk 100 – The compact and mobile desk for cycling

According to Thermaltake, the Cycledesk 100 is no ordinary desk. It fits into most environments due to its small footprint and portability. This is only 80 cm long and 50 cm wide. It can be moved across the floor using four castors that can be rotated and locked in 360°. Cyclists should be able to place their monitor or laptop on the desk and adjust the height of the table as they wish so that the field of view from the bike matches the display.

Of course, mobile devices can also be used to control the table height and the RGB effects, which can be perceived via an RGB strip. The gaming desk contains the TT Smart Control Unit, which can be controlled via WiFi using a mobile device or PC. Cycledesk 100 usage and height settings are recorded so that the desk height can be adjusted according to the user’s schedule.

In addition to the table, there is the RGB Desk mobile app for Android and iOS. With the help of these, owners of the Cycledesk 100 can choose between four preset table heights of 72, 90, 100 and 117 cm. Lighting effects, frequencies and brightness should also be controllable via the app. Furthermore, the iTake Engine software is an additional exclusive app for the Cycledesk 100 on Android and iOS, which has a similar purpose as the RGB Desk app.

The height of the table can not only be adjusted or adjusted via apps, but also via a panel directly on the Cycledesk 100 with six buttons. The current table height can also always be kept in mind via an existing display. Other features of the Cycledesk 100 are: an anti-collision sensor that stops the table if it touches unwanted objects, improved electric motors, a laptop stand on the side, a cable management system and a waterproof mouse pad. Thermaltake has not yet provided any information on prices and availability.

High on Life will have 'quirky and humorous' achievements

Apparently, the writers have already begun work on two more seasons of The Witcher.

Is Ubisoft back on Steam? Roller Champions also appears in the database