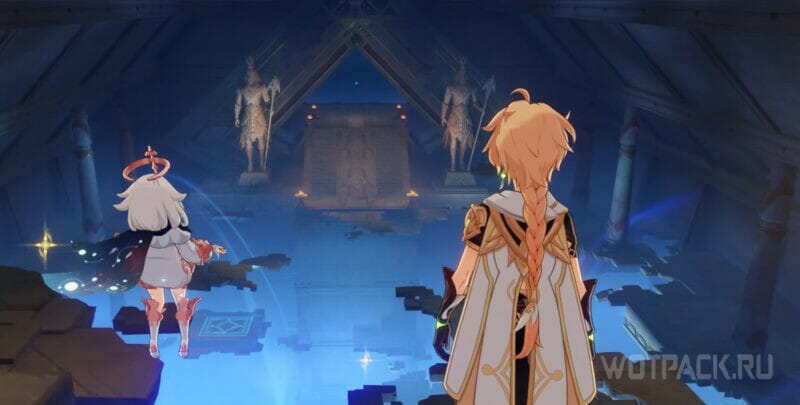 Go to the location indicated by the stone slab in Genshin Impact – one of the initial stages of the Double Proof quest, which starts in the desert village of Aaru. After a dialogue with the scientist Soheil, a new symbol will light up on the ancient tablet, indicating the location of another temple to be explored.

In this guide, we will show you how to follow the Red Sands Plate marker and get to the place where it points.

How to get to the place indicated by the stone slab

To complete this stage of the task, you will have to use the Red Sands Plate tool and strictly follow its instructions. Follow the path indicated by the tablet to reach your destination.

Step 1: Track the location with the Red Sands Plate 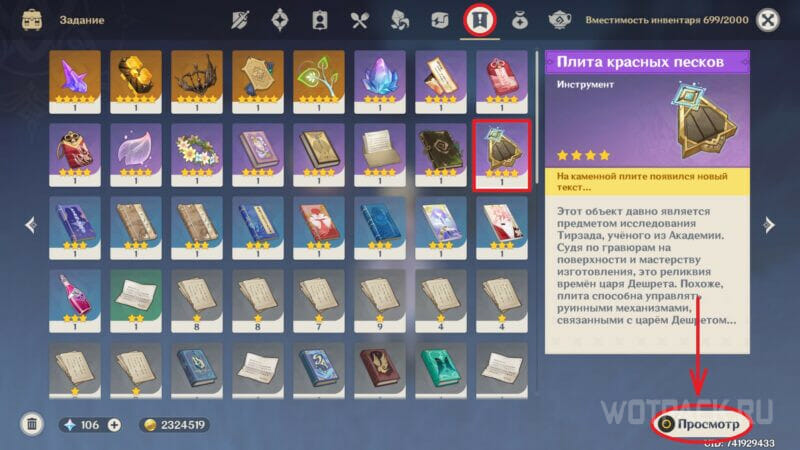 After the end of all dialogues in the village of Aaru, open the Inventory and go to the tab “Exercise“. Find the Red Sands Plate and press the “View” in the lower right corner. In the slab menu, open the third tab (marker icon) and select a new location in the list that appears – Duat Hall. Use the “Go to” in the lower right corner to open the map and see the location of the desired point. Go to the place indicated by the slab – the location of Magma Dune. Before entering the pyramid, immediately activate the teleportation point and go into the room. Inside you will find a closed door, two large torches and two passages closed with pedestals on the left and right sides of the room. Go to right side and activate the pedestal blocking the path to open a passage to the second floor of the complex. It is also recommended to open and pass in advance left. Later in the passage, it will help save some time.

Climb up until you reach a room with a candlestick and a primordial spark. Interact with the luminary to send him on his way. Watch out for the blades in the hole right from the candlestick were not active during the flight of the spark. Spend a spark to the second candlestick below and send it back on the road. This time, the luminary will go up the stairs and out into the main hall with two torches, where they were at the very beginning.

If this barrier was not opened in advance, return along the same path that came to this corridor. Wait for the blades to start and fly on the resulting air flow to the upper floor. Spend the spark that stopped in the hall to an inactive torch to open the door further. Get down into the opened passage down.

Step 3: Follow the caves to the door to the Duat Hall Below you will see Amazing Chest and a riddle with invisible torches, the solution of which can be found in a separate article. Go to north, in the opposite direction from the chest and replicator, until you notice a deep pit leading into the caves. Follow the directions on the slab and go down. At the bottom of the pit, you will find a small room filled with enemies. She has Western side there is a passage further. Follow the long cave corridors to the very end to get into a large hall leading to the desired location.

Head for one of the slab markers to find another teleportation point. Be sure to activate it to be able to quickly travel to these caves. To the east of the waypoint mentioned above is the entrance to the Hall of the Duat.

Climb up the stairs to get inside. In the first room of the complex, which is guarded by the Primordial Structure, turn straight up. Climb up the stairs turn left twice. At the top of the last corridor is a huge door blocking the way to the Hall of the Duat. Be sure to activate the last teleport near the passage, it will come in handy more than once in subsequent passages. Nearby you will find a pedestal, interaction with which will open the gates to the hall. After that, Paimon will say that the heroes have finally come to the indicated place.

We hope this article helped you get to the location indicated by the stone slab in Genshin Impact. AT comments you can leave questions that arose during the execution of the stage. Read the full walkthrough of the Double Proof quest and follow the Genshin Impact guides on our website.

PS5: with this monstrous 1 TB SSD on sale, you will be better equipped than most fixed gamer PCs

A PHOTO. How did it happen. England convincingly destroyed Iran

Rumor: Star Wars Jedi: Survivor will be shown at The Game Awards 2022

Amazon offers: Black Friday 2022 comes alive! Here are all the best offers not to be missed!

Mercedes, or almost, is going wild with this electric van equipped with a fridge and two charging ports