Just in time for Christmas, “Mario Kart 8 Deluxe” once again hits the fun pedal. On December 7th, wave 3 of the Booster Track Pass will race across the starting line, making way for eight more revamped tracks from across the Mario Kart franchise. 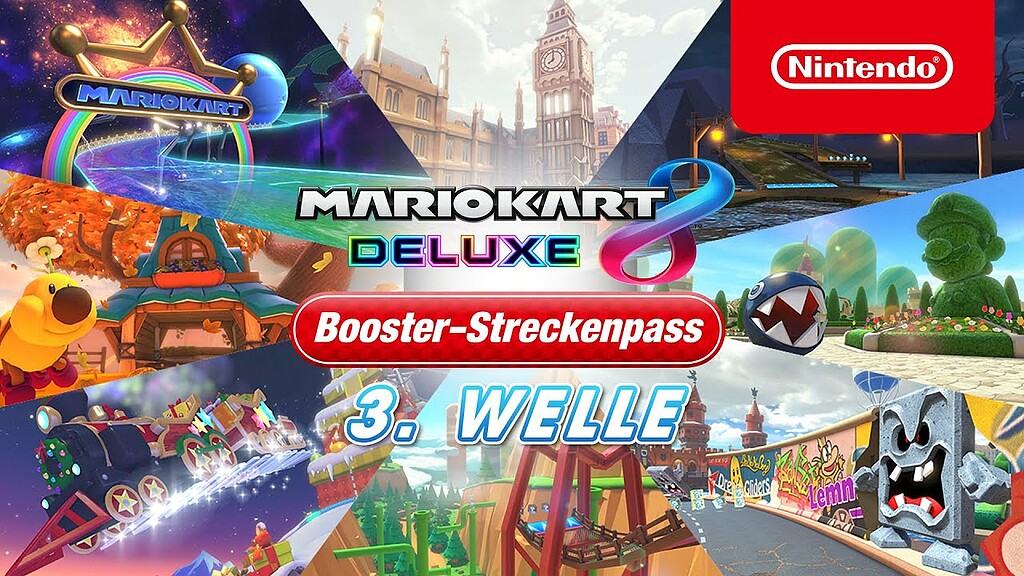 The rapid circuit Peach’s castle garden from Mario Kart DS is just as much a part of it as the wintry mountain gift giving from Mario Kart Tour. The latter comes up with Christmas motifs and sounds while you curve around icy peaks and huge fir trees. Also from “Mario Kart Tour” come the exciting city tours slopes of Berlin and London Tour. Or how about a galactic race down Rainbow Boulevard from Mario Kart 7?

Wave 3 of the Booster Track Pass includes the Rock Cup and the Moon Cup. Both feature classic racetracks from the “Mario Kart” games for Wii, Game Boy Advance, Nintendo DS and Nintendo 3DS. Up to four riders can race down the slopes together on one console, up to eight via the local connection and up to twelve via the online connection. Here is an overview of the cups and the racetracks:

London-Tour: The players race all over the British capital and around its famous landmarks in this course from Mario Kart Tour.
Buu-Huu-Tal: Eerily beautiful and darkly hazy at the same time, this spooky track from Mario Kart: Super Circuit leads across an enchanted lake.
mountain trail: Beware, hairpin bends and pounding boulders await the kart drivers on this alpine track from Mario Kart 7.
forest of leaves: On this track from Mario Kart Wii, players twirl through autumn leaves and dash through the tops of massive trees.

Pavement of Berlin: Keep an eye out for the falling Wummps and boulders as you zoom past the sights of Berlin on this track from Mario Kart Tour.
Peach’s Castle Garden: Chirping birds, blooming flowers, and vicious chain dogs await players on this Mario Kart DS track that winds through Princess Peach’s sprawling park.
Mountain protection: Through half-pipes and over snow-covered hills, past giant candy canes and colorful gift packages, this is an enchanting, festive race track that was first drivable in Mario Kart Tour.
Rainbow Boulevard: Originally created for Mario Kart 7 on Nintendo 3DS, this celestial boulevard twists and turns around numerous planetoids.

In total, the Mario Kart 8 Deluxe Booster Track Pass consists of six separate waves, each offering eight additional racing tracks. Wave 1 and wave 2 have already appeared. With the upcoming wave 3, half of all 48 included tracks will be playable from December 7th. The remaining 24 will follow by the end of 2023.

Players with a paid membership of Nintendo Switch Online + Expansion Pack can race the new tracks at no additional cost.

Is Assassin's Creed Valhalla the last big installment in the Ubisoft series?