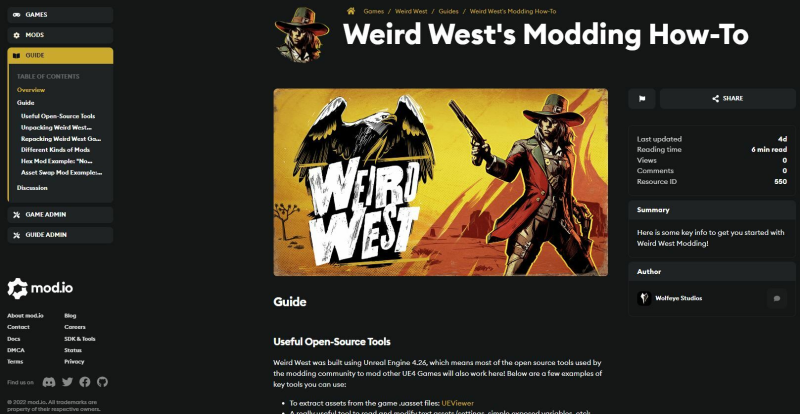 WolfEye Studios has released update 1.05 for Weird West which adds mod support to the PC version and fixes bugs in every version of the game (PC/Playstation/Xbox). Check out what’s new in the November 21st patchnote below.

You can now view and install mods directly from the in-game mods menu, thanks to mod.io!

We’ve added some sample mods to the game for you to play around with as a starter kit:

In addition to the four sample mods we provide, you’ll also find a free Fancy First Person Mod by Joe Wintergreen in patch 1.05. A very fun way to rediscover Weird West! More information here. This mod can be installed directly from the new in-game modding menu!

Please keep in mind that this mod is made by the community and was not created by Wolfeye Studios. We are only promoting it here, but we will not support it, since we are not its creators.

If you’re interested in making mods for Weird West, give it a try and upload them via the mod.io web page to make them available in the game for everyone!

While mod support is only available for PC Steam/EGS/GoG, patch 1.05 is rolling out to all other platforms and stores as it also brings a few fixes:

Fixed scenery shadow flickering that occurred in some areas when rotating the camera on Xbox and Playstation USE keybinding on PC now also correctly rebinds the throw key when carrying items. If a shovel or pickaxe somehow ends up with zero durability when carried from the player’s inventory, it will return to full durability when removed Fixed a bounty board that would sometimes list a child as the target of the bounty, making them unkillable Fixed a rare situation during the Protector’s Journey, when the attack waves of the Ravens in Olvidado Pueblo never ended, causing the target to get stuck

Hearthstone, March of the Lich King: Signature cards are coming, all about the new ornament

XboxDynasty: What type of horror gamer are you?

Dragonflight Quest: Participate in the hunt for dragons and win official World of Warcraft prizes

Overclockers.ru: Postal III was removed from sale on Steam, and the developers of the series recommended everyone to download “this garbage” from torrents

Record of Ragnarok, mimichan.259’s Aphrodite cosplay is awaiting the fight