21.11.2022 at 08:41 by Matthias Brückle – Anyone who explores the city of Stormwind with their new Dracthyr in WoW will be shadowed as part of a quest – did you notice that? Or did the developers at Blizzard hide this Easter Egg too well? We’ll show you what you may have missed!

In one of the first quests of fresh Dracthyr on the Alliance side, these newcomers have to explore the capital city of Stormwind and talk to NPCs in different corners. But the attentive Twitter user Portergauge noticed a cool detail: your Dracthyr character is being tracked! Not obvious, but if you look closely, there is always an NPC with a flashy look in your area that speaks against simple asset recycling. A black-haired human with a long mane, an eye patch and a goatee. If you are familiar with Alliance characters, you will know right away! (via WoWHead)

More on the Dracthyr: The Stormwind Guards are also reacting to the new race

WoW: Dragonflight: Will the treasury soon have a catch-up mechanic?

A catch-up mechanic for the Great Treasury in WoW: Dragonflight? We like Associate Game Designer Morgan Day’s idea. WoW Dragonflight: Caller of the Dracthyr – This is what the start looks like

WoW Dragonflight: In this special we show you the first part of the campaign of the Dracthyr callers on the Forbidden Island!

Secret Service is on the trail of Dracthyr in WoW

The same character can be found as a banker, auctioneer, apprentice mage, and even an embassy guard. It is none other than Elling Trias, who works undercover as a cheesemonger. However, to players, he is a well-known member of the Alliance Intelligence Agency, SI:7. 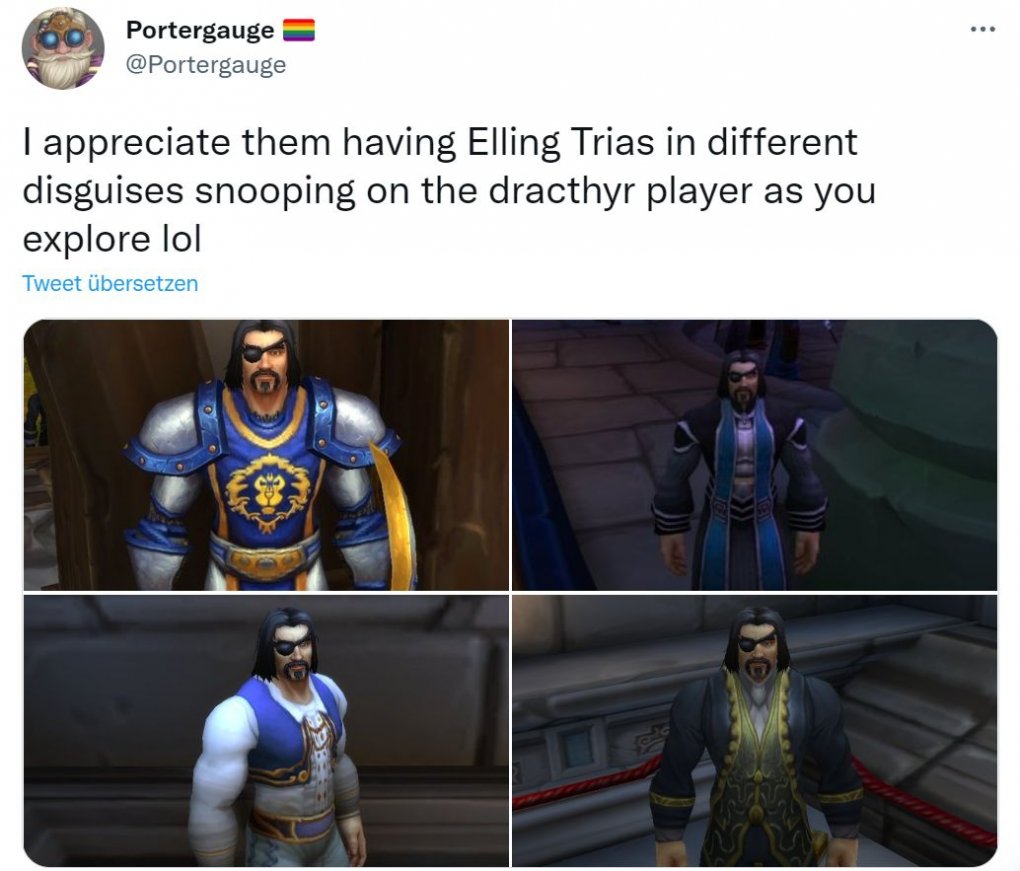 This also coincides with a dialogue between Turalyon and Mathias Shaw in which the High Exarch orders the SI:7 to keep an eye on the Dracthyr. Developers could also simply add such a line of dialogue for atmosphere, so many players are happy that the people at Blizzard even made sure that an agent from SI:7 went into action without noticing it too much.

Such a thing has not yet been discovered on the Horde side. Or, as a Horde Dracthyr, have you noticed someone shadowing you? Maybe the people of Orgrimmar are just quicker at trusting… or a lot better at disguise! Are you happy with the two specs of the Dracthyr now that you can play them extensively? Write us your opinion in the comments!

Aroged: The problematic release of Cyberpunk 2077 caused the abandonment of multiplayer in the game

The settlers: The community feedback on the release date is so devastating

Aroged: Hungary spoke out against the allocation of financial assistance to Ukraine by the European Union in the amount of 18 billion euros

The crisis in iPhone 14 production will continue until 2023

The developer complained that she was not mentioned in the credits of God of War: Ragnarok

Xbox Series S on offer, FIFA 23 and all the Euronics Black Friday 2022 discounts