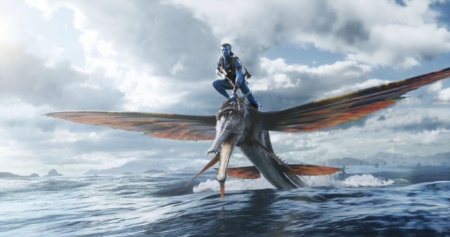 One of the most anticipated movie premieres of 2022, Avatar 2, is only three weeks away, so James Cameron and Disney-owned 20th Century Studio are continuing their massive promotions. Simultaneously with the posters of the main characters, an extensive interview with GQ was released, in which the director revealed some interesting details, in particular, about the budget of the film.

Experience it in theaters December 16 and get tickets now: https://t.co/9NiFEIpZTE pic.twitter.com/gDEdYUGqRG

If you remember, in early 2021 thanks to a Chinese re-release, James Cameron’s original Avatar reclaimed the title of highest-grossing film of all time (excluding inflation), still holding it securely with $2.9 billion in box office worldwide. This is the result taking into account all reruns, including the recent showing of the updated Avatar with a restored 4K HDR image in Ukrainian cinemas.

Specifically, the amount that 20th Century Studio spent on the production of the second part of “Avatar” with the subtitle “The Way of Water”, James Cameron did not name, but noted that the film is “damn expensive” and is “the worst business case in the history of cinema.” Cameron also said that it can only be considered profitable if it becomes “at least the third or fourth highest-grossing film in history.” This is exactly the break-even point of Avatar 2. Star Wars: The Force Awakens is now the fourth highest-grossing film in history (excluding inflation), with $2.068 billion in worldwide box office. This means that Avatar 2 must raise at least $2 billion to start turning a profit. Will he succeed?

Cameron also made it clear that there is a huge amount of new (and expensive) technology behind Avatar 2. Among other things, the director highlighted the new Sony Venice-based camera system, which essentially just connects several high-end cameras together to create a stereoscopic 3D system. In the past, he has especially praised the high dynamic range of cameras. Obviously also figured out how to film and track movements both above and below the water. Cameron is known for his ingenuity and creativity – for example, for the original Avatar, he designed a camera that allows him to see the characters in their CGI environment in real time as they shoot. He is also known for his vision of the role of technology in filmmaking. Yes, he was among the first to promote 3D, but he was highly critical of the way others used the technology.

Trailer “Avatar 2” in the original (in English)

In the Ukrainian film distribution “Avatar: The Way of Water” will appear on December 15. The sequel, which will tell about the underwater world of Pandora, will be released 13 years after the release of the original film. The second part was directed by James Cameron, who directed the first film, and starred Sam Worthington, Zoe Saldana, Sigourney Weaver and Kate Winslet.

The events of the second “Avatar” will take place more than decades after the plot of the first part; the film follows Jake, Neytiri and their children during another battle for Pandora. Further, new films in the franchise are planned to be released every two years – at least two more films are planned. Previously, James Cameron said that Avatar 2 will run for about three hours and admitted that after the third or fourth film in the franchise, he could entrust the series to another director. If the second part fails at the box office, then the story may end on the third film, although ideally Cameron wants to make five films.

At one time, James Cameron’s Avatar was nominated for nine Academy Awards, including Best Picture and Best Director; as a result, the film received three awards, including awards for best cinematography, visual effects and production designer.

Netflix: the sequels are the guarantee against the competition!

He can't be stopped. Giroud repeated the achievement of the legend of France

MemTest86+ is back with first new version in 9 years