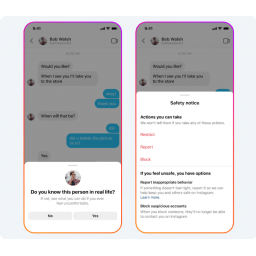 Meta announced that for anyone under the age of 16, or under the age of 18 in some countries, when they log into Facebook, they will enable more privacy settings by default. For teenagers who already have a Facebook or Instagram account, the platform will display a notification to encourage them to use these settings, which are activated with a single click (tap).

Meta also said that they are working on new tools and education to stop the spread of intimate photos on the platform.

Last year, the company introduced some measures to protect younger users from interacting with potentially suspicious adults. So, for example, adults are prevented from sending messages to teenagers with whom they are not connected or seeing them in recommendations of “People you may know”.

Meta says it is now testing new measures to protect young users from sending messages to suspicious adults they are not related to. These people will no longer recommend themselves to children as people they may know.

By “suspicious account” Meta means an account belonging to an adult who, for example, was recently blocked or reported by a younger user.

Meta is also testing the effect of removing the message button on children’s Instagram accounts as additional protection when viewed by adults.

“We’ve developed a number of tools so teenagers can let us know if something makes them feel uncomfortable while using our apps, and we’re introducing new notifications to encourage them to use these tools,” said Meta.

The company recalled that for some time it has been encouraging teenagers to report accounts after they block someone and that it sends out safety notices with information on how to deal with inappropriate messages from adults.

“In just one month in 2021, more than 100 million people saw security alerts on Messenger. We also made it easier for people to find our reporting tools and, as a result, we saw more than 70% more reports from minors in the first quarter of 2022 compared to the previous quarter for both Messenger and Instagram DMs.”

The “more private settings” for teens that Meta announced are about who can see a user’s friends list, who can see the people, pages and lists that teens follow, who can see posts on their profiles in which they’ve been tagged, a preview of posts in which they are tagged before the post appears on the profile, as well as who is allowed to comment on their public posts.

Similar default settings for teenagers were recently introduced on Instagram.

Meta also said it is working to build a global platform for teenagers who are concerned that their intimate self-taken photos could be shared on online platforms without their consent. This platform, which Meta is developing in collaboration with NCMEC (National Center for Missing and Exploited Children), experts, scientists, parents and victims’ advocates, will be similar to the one created to prevent the sharing of intimate images of adults without their consent. Other technology companies will also be able to use the platform.

Target also announced educational materials for teenagers to encourage them to seek help regarding the sharing of their intimate photos or if they experience sexual abuse.

“We found that more than 75% of the people we reported to NCMEC for sharing child exploitative content shared the content out of anger, bad humor or disgust and with no apparent intent to harm. Sharing this content violates our guidelines, regardless of intent. We plan to launch a new campaign that encourages people to stop and think before sharing those images online and report them to us instead,” the company said.

Genshin Impact in Italian and the pre-registration contest: the rich prizes up for grabs

Samsung models that will not get Android 13!