“people Can’t Buy This Garbage Anymore!”: Running With Scissors Is Happy That Postal 3 Has Been Removed From Steam 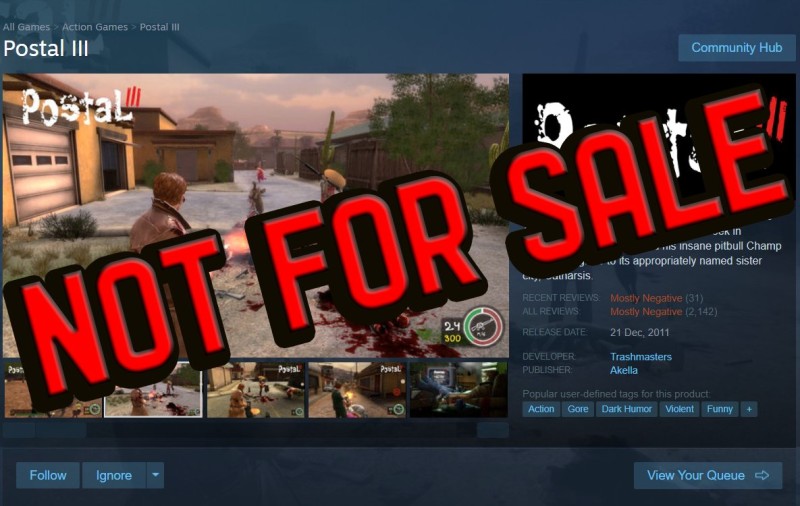 You can no longer play Postal 3 on Steam or anywhere else. The reason is that the server that authenticates every entry in Postal 3, whether the player wants to play online or not, has gone down. Without this server, no one can play Postal 3, which resulted in the game being delisted from Steam. And the developer of Postal Running With Scissors loves it.

“Due to DRM issues with Postal 3 and the overall crappiness of the game itself, the game is no longer officially sold on Steam,” Running With Scissors tweeted. “We didn’t have control over the page, so we couldn’t make it free before the DRM problems started. At least people won’t buy this garbage anymore!” 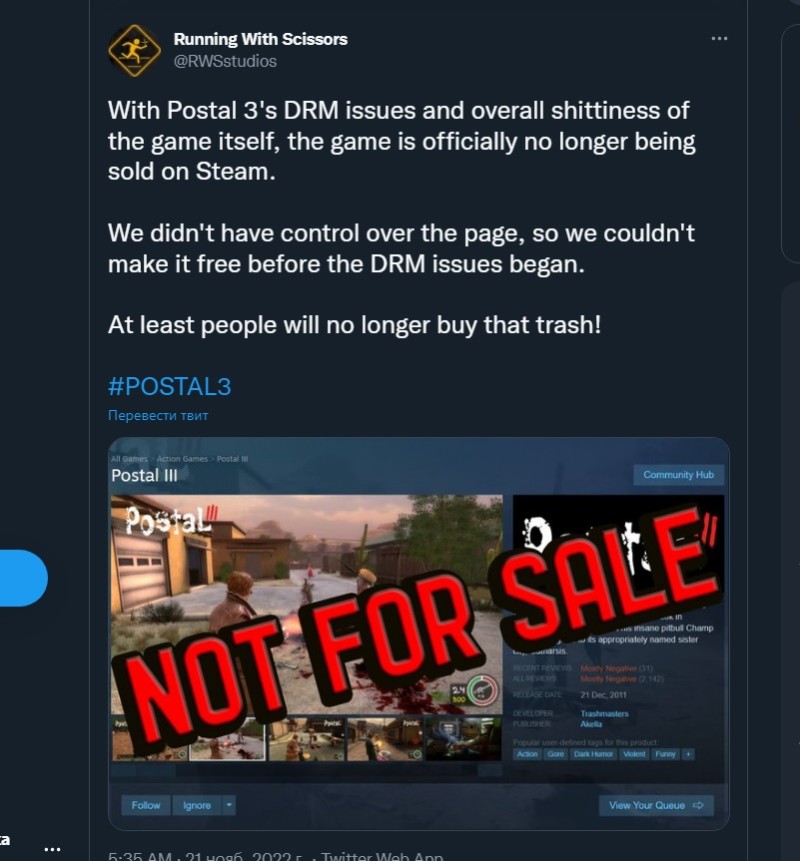 For those wondering why a developer would write bad things about their own game, it’s because Running With Scissors didn’t technically make Postal 3. They outsourced development to Russian publisher Akella, who then hired Trashmasters to work on it. And Trashmasters has lived up to its name by turning Postal 3 into complete garbage, from a bad script to near-constant crashes. It was so bad that Postal 3 has a mere 24 rating on Metacritic and one of the worst ratings of any game on Steam.

Following the release of Postal 3, Running With Scissors removed the game from their online store and encouraged fans to purchase the earlier games instead. And to make sure a third game never really existed, in Postal 2: Paradise Lost (an expansion to Postal 2 that came out in 2015) they twisted Postal 3’s story so that it was the result of an 11-year coma caused by the fact that Dude from Postal drove his car into the stop sign. Postal 4, released this April, calls itself a true sequel to Postal 2 and claims that “there is no third game.”

Since there are no legal ways to play Postal 3, Running With Scissors has advised fans to pirate the game if they really want to experience it. But if a developer tells you not to play their game, that’s a sure sign that you should listen.

Games for less than €20 for Black Friday: The Last of Us 2, Cyberpunk 2077 and many others

Samsung plans to break a record next year with Android 14

A Plague Tale Requiem has reached the release, the players are happy with the project so far