The discovery of graphene prompted scientists to experiment with other “two-dimensional” materials that can create structures one or just a few atoms thick. Typically, such experiments do not end with the creation of working devices, but there are exceptions – recently, scientists have created a working image sensor based on a “two-dimensional” semiconductor. 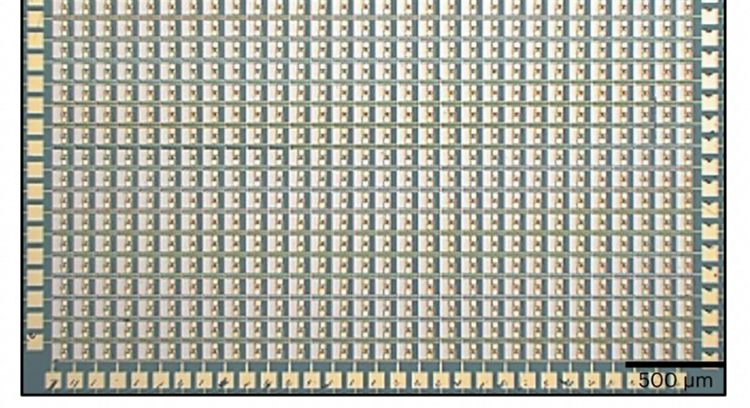 Each square is a monatomic film of molybdenum disulphate. Image source: arstechnica.com

After the discovery of graphene and its properties, scientists have discovered many other materials that are also capable of forming thin atomic films. Some of these materials, like graphene, are composed of a single chemical element, while others are formed from various chemicals that can build their structure in a layer one or more atoms thick. Most of these new materials have unique properties. While graphene is an excellent conductor of electricity, a number of other materials are semiconductors. In addition, their properties can be changed depending on how the layers of atoms are located in the structure.

Typically, scientists explore the possibilities of these new materials in experimental devices and prototypes, which often show record speeds or miniatures, but are not fully functional devices. But just the other day, one group of researchers decided to go beyond mere demonstrations and built a 900-pixel image sensor using an atomically thin material.

Most image sensors (matrices) in modern photo and video devices consist of standard silicon semiconductors manufactured using CMOS technology. But what happens if you replace silicon with another semiconductor? In this case, the researchers used molybdenum disulfide, an atomically thin material that has found widespread use in experimental devices.

The creation of a new matrix began with the growth of an atomic film of molybdenum disulfide on a sapphire substrate by vapor deposition. Then it was removed from the sapphire and transferred to a pre-prepared silicon dioxide surface, on which the wiring had already been etched. Another wire was applied on top. The end result of this process is a 30 by 30 pixel grid, where each pixel is a microdevice consisting of a source and drain electrode connected by a layer of molybdenum disulphide atoms. Light falling on the grid creates a charge on each of the pixels, which affects the ability to transfer current between the source and drain electrodes. The difference in resistance between pixels allows you to determine the degree of illumination and thus obtain information about the image.

The new type of matrix uses very little power to operate. Researchers estimate that less than one picoJoule is consumed per pixel. It is also very simple to clean the matrix from charges by applying a strong voltage between the source and drain electrodes. Another important advantage is high light sensitivity and low noise level.

There are also disadvantages. The weak point of the new device is the speed. Although the initial response of the sensor to light can be recorded in as little as 100 nanoseconds, a full, high-contrast exposure requires a second per color. For example, blue takes over two seconds to expose, and red takes almost 10 seconds to be fully exposed. Therefore, one should not hope that with the help of the new matrix it is already possible to shoot video on a mobile phone. On the other hand, this does not mean at all that the new device is useless. There are many tasks and applications where light sensitivity and power consumption take precedence over speed, for example, all kinds of sensors and sensors. The developers of this device see good prospects for its application in the field of IoT.

Disney has suddenly changed its CEO - and this is again Bob Iger, who left the position almost three years ago

Gareth BALE: Head coach's speech at half-time made the difference

Silence – It may be the solution to electrical problems!