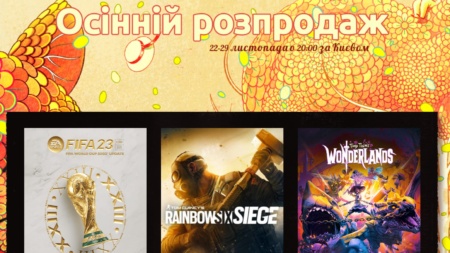 The Steam sale began on November 22 and will last for a week – until November 29, 20:00. Discounts on the service now reach 90% and apply to both classic games and new releases.

A selection of games with discounts from the autumn sale on Steam:

The full list of games that participate in the promotion can be found on this page. You can also use the SteamDB discount tracking tool.

Also on Steam, the selection of nominees for The Steam Awards was launched. There are 11 different categories offered this year, including one new category for games that users love to play on handheld devices:

Voting will last until 19:00 on January 3. The top five nominees in each category will be announced in time for the start of the Steam Winter Sale.

There are several ways to nominate a game:

From the page in the store, from the messages of the developers. From the Steam Awards nominations page.

You can get a badge for a nomination in one category and improve it with each next category.

Here is a video explaining this process:

Previously, Valve changed the sales schedule on Steam: now there are 4 big seasons of discounts, including spring. This period will replace the Lunar New Year (or Chinese New Year) sales launched on Steam in 2016 to celebrate the influx of developers and users from Hong Kong, Taiwan, China and South Korea. The first version of the spring sale will take place in 2023, from March 16 to 23.

What are the fastest selling PlayStation exclusives ever?

Promo connected watch: when the Huawei Watch GT 3 Pro wants to compete with Garmin and Samsung, it looks like this