The United States is experiencing a record housing shortage and a solution, at least in part, could be pre-fabricated, biodegradable 3D-printed houses. The technology for creating such structures was proposed by scientists at the University of Maine. BioHome3D is a house whose components are completely 3D printed from biodegradable materials. It takes literally half a day to assemble and connect the structure to communications. 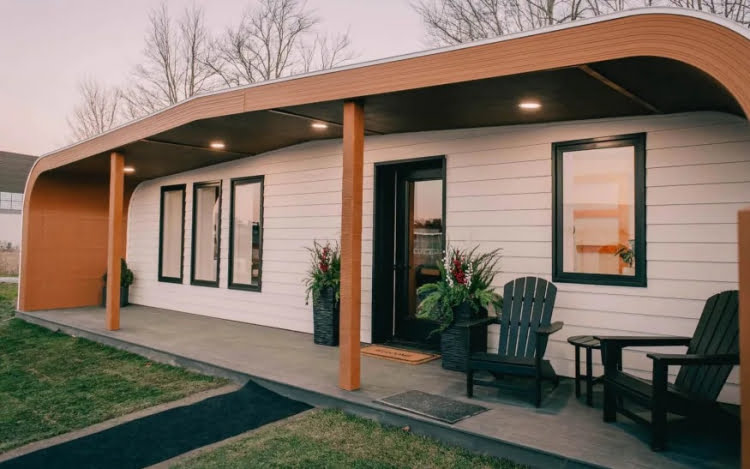 3D printed houses have been around for a long time. But often they are made of concrete or clay, and also use traditional solutions, such as wood floors. The Advanced Structures and Composites Center (ASCC) operating at the mentioned university presented an alternative option. Scientists have created a small prototype with an area of ​​​​about 55 m2, in which the floors, walls and roof are printed from wood fibers and tree resins, that is, from renewable and biodegradable materials.

It is noteworthy that such a house is brought into a state of complete readiness for occupancy not in weeks or months, but in just half a day – after printing four modules, specialists assembled them in a matter of hours, and one electrician also took about two hours of work to electrify. It will take some time to connect to other communications.

ASCC believes that BioHome3D could help address the housing shortage in the US by reducing the need for materials and reducing the number of workers involved in construction. In addition, it is assumed that such houses will be affordable, although the exact price is unknown. But it is known that only in the state of Maine there are not enough about 20 thousand houses. However, the shortage of homes in the country, many associated with political, not technological issues – we are talking about a series of restrictive laws related to zoning and some rules for land use, allowing local residents to block attempts to build more homes in the area.

One way or another, the rejection of concrete during construction can have an extremely beneficial effect on the environment. According to some data, the production of the main component of concrete – cement in the world emits 8% of the total amount of greenhouse gases emitted into the atmosphere. For example, the entire aviation industry causes less damage to the environment. The use of sustainable materials could make the construction industry much more efficient.

Last February, a 3D-printed house was put up for sale in the United States for the first time. The seller asked for $300,000.

The Witcher 3: the next-gen version compared to the original in video

Sonic Frontiers: Medal table: This is how the trade press rates Jump’N’Run