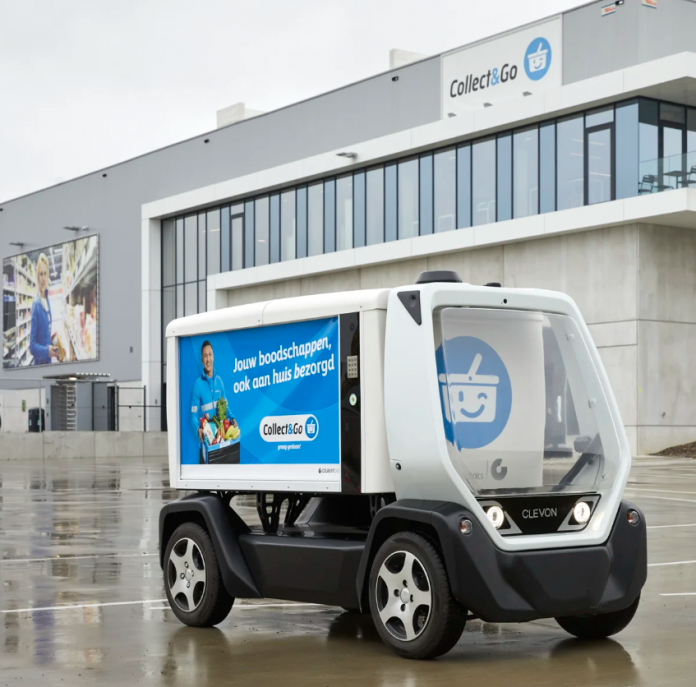 Colruyt Group debuts its own unmanned car on public roads.

Yesterday, the Belgian supermarket chain carried out the first test with a self-driving vehicle in Londerzeel. The project is based on their online delivery service Collect&Go.

The idea of ​​a self-driving car is not something of recent years. In the end, people always want to expand and improve inventions. As early as 1939, the American Norman Bel Geddes came up with a vehicle that moved independently via magnets in the road surface. It was part of the 1939 New York World’s Fair presented by General Motors. In the 1950s, they took that idea even further.

The idea of ​​a self-driving car was further explored during the 1960s in the UK and the 1970s in Japan. Another decade later, Mercedes participated in such a project in Germany. The concept is not as old as the automobile itself, but it doesn’t make much difference.

And now there is the CLEVON 1 from Colruyt, by the Estonian company Clevon. This unmanned vehicle is a combination of remote control and an autopilot. So not 100% autonomous. The focus is on e-commerce, with applications for the Collect&Go delivery service. In recent years, services like this have become a lot more extensive and that growth will only continue.

The project is the next step in the technological evolution of the retailer. The initiator for these and other innovations is Smart Technics, a technology start-up within the group.

The CLEVON 1 was first tested autonomously in the parking lot, after which it took to the public road with remote control. The ride was limited to Londerzeel territory. She went from the distribution center to the local Collect&Go collection point. The 4 kilometers that were covered unmanned are a first and a record for Belgium.

Both local police and municipal authorities were informed and involved in the test. The FPS Mobility was also involved, for the permit. And any risks on the route were calculated by traffic institute VIAS. Safety before everything! 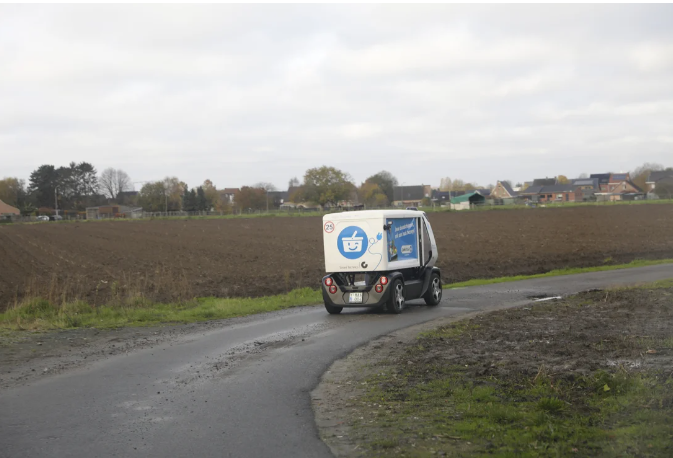 The CLEVON 1 on the road

That is how it works

The CLEVON 1 is equipped with six cameras: three front, one rear and two side cameras. The vehicle is also equipped with short and long range radars. They serve to detect and distinguish obstacles. The radars are also used to measure distances. Clevon puts all the information together through deep neural networks. This allows the vehicle to perceive and identify a dynamic environment.

An operator can communicate with the car from the control room via 4G. To be on the safe side, two SIM cards from the same number of providers were used. The intention is that in the future 1 operator will be able to drive several vehicles at the same time.

The top speed is 50 km/h, but before the test it was agreed to limit it to half that.

This first successful test aroused the interest of Colruyt. Further tests should provide a better picture of possible employability. A shortage of drivers, high transport costs and the focus on innovation all play a part in that decision.

Read more: Only 3 out of 10 Belgians would already step into a self-driving car

Waze will be integrated directly into cars – Aroged

SANS: This is how you arm yourself against attacks that bypass multi-factor authentication

This high-end surveillance camera is at -30% (4K, facial recognition, etc.)

buffedCast: #608 with the WoW: Dragonflight release and confusing endgame

Aroged: Media: the government of the Russian Federation has tentatively approved analogues of TikTok, Zoom and Instagram * - over 2 billion rubles will be spent on their development

Japanese Top 10: 96% of weekly copies are Pokémon Scarlet and Violet

Xbox, Phil Spencer: “in the future we may have to raise the price of Game Pass, Series X and Series S”