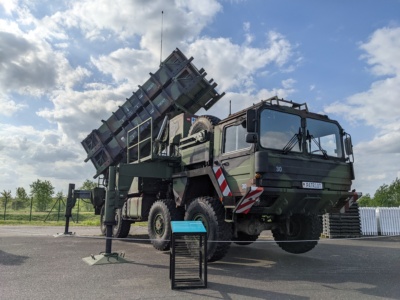 At a night meeting of the UN Security Council on Russian strikes on Ukrainian energy, Volodymyr Zelensky called on partners to support the Ukrainian peace formula and provide more air defense systems in order to effectively counter Russian terror (on November 23, the European Parliament finally recognized Russia as a state sponsor of terrorism, and two days before that, the Parliamentary Assembly NATO) against the civilian population. The international reaction to another act of energy terrorism from Russia was not long in coming – the Minister of National Defense of Poland turned to Germany with a request to transfer to Ukraine the American Patriot anti-aircraft missile systems previously offered to Poland to strengthen its air defense.

Poland believes that this is the best way to improve security and protection against missile attacks from Russia. 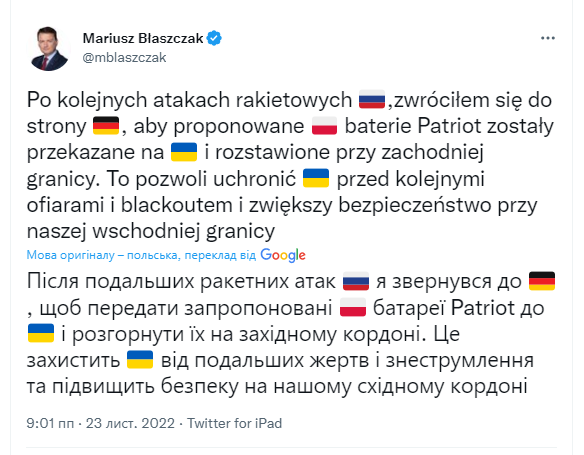 After the subsequent rocket attacks on Russia, I asked Germany that the Patriot batteries offered to Poland be transferred to Ukraine and placed on the western border. This will protect Ukraine from further casualties and blackouts and improve security on our eastern border.”

Minister of National Defense of Poland

This idea was also supported by the head of the ruling Law and Justice party, Yaroslav Kaczynski, commenting on the German proposal to transfer Patriot air defense systems and Eurofighter fighters to Poland in an interview with PAP, he stated the following:

“For the security of Poland, it would be better if the Germans handed over this technique to the Ukrainians and taught [использовать военную технику] Ukrainian crews on the condition that these batteries will be located in the western part of Ukraine.”

We do not yet have the MIM-104 Patriot air defense system, although Ukraine has repeatedly requested this latest American anti-aircraft missile system used by the United States and its allies. This medium / long-range air defense system, produced by the American Raytheon, significantly outperforms not only all air defense systems of the Armed Forces of Ukraine, but also hostile ones. It now exists in three versions. The complex consists of 6-9 batteries, each battery contains 4 launchers (each contains four missiles). A modern radar with a phased antenna array provides tracking of more than a hundred targets and allows you to simultaneously fire up to 8 targets. With a rich arsenal of missiles for various purposes, the Patriot provides the impression of many ballistic and cruise missile targets, as well as other highly maneuverable targets, including active, passive and thermal seekers. The cost of supplying 9 batteries (4 launchers per battery) of Patriot systems can reach up to $ 9 billion (36 launchers of Petriot PAC-3 missiles (9 batteries of 4 launchers), 288 Petriot PAC-3 missiles, 216 air defense systems with improved guidance GEM-T, 10 sets of phased array radars, 10 target acquisition control stations). Without a doubt, the MIM-104 Patriot air defense system is capable of significantly strengthening the air defense of Ukraine and helping to create a multi-layered missile defense system. “Ukrainian air shield”.

Do you have one of these Xiaomi smartphones? Say goodbye to updates

Tomb Raider Next, new in 2023: Crystal Dynamics enthusiastic about the project