Players will be able to give the Wanderer a new name in Genshin Impact 3.3

Insider hxg_haitham cited Team China as saying that as part of the Archons quest in Genshin Impact patch 3.3 or by using a new one-time item, players will be able to change the name of the Wanderer (previously known as Scaramuccia). 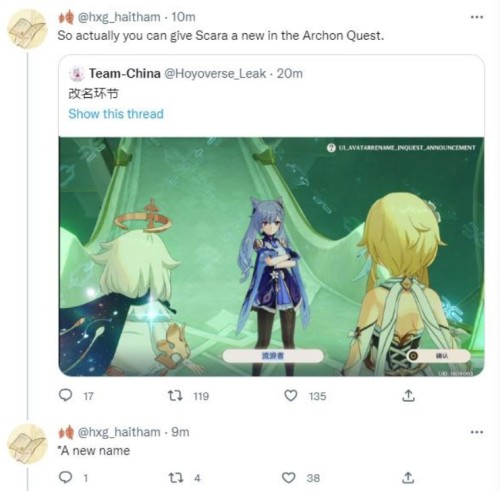 However, at the same time, developers will introduce a ton of various restrictions when naming this character – they will be much stricter than when choosing a name for the Traveler. For example, he won’t be able to be called Scaramuccia, Seki no Kami, Narrator, and other names he used before.

In addition, the invented name will only be visible in the Teapot of Serenity – it will not be used anywhere else. Thus, in the team, the character, apparently, will still be called the Wanderer. The following paragraph contains possible SPOILERS for the plot of the Archons quest.

A VNTaleak informant said that everyone in Teyvat would lose their memories of Scaramucci, including Scar himself. Only the Traveler and other Strangers will remember him. With the help of the knowledge capsule saved by the protagonist, Paimon, Nahida and the Wanderer will recover the memory. It will be assumed that the chaos in Tatarasun was caused by an unknown person.