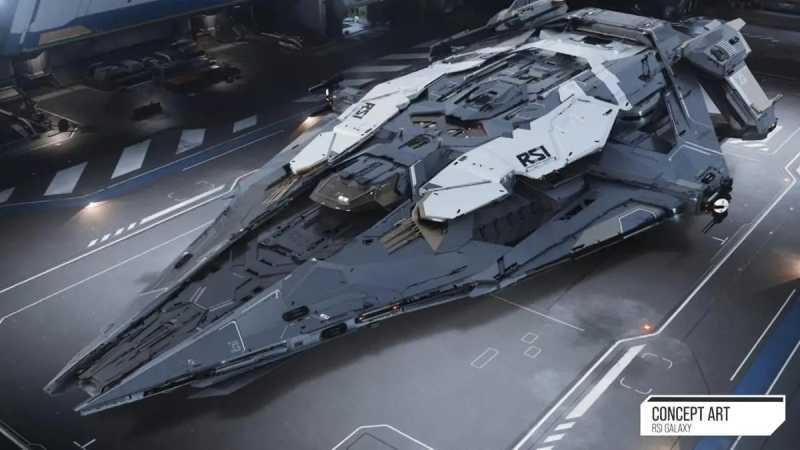 Today, Cloud Imperium Games unveiled the first look at the next big spaceship that will join the lineup.

The RSI Galaxy doesn’t look like a warship, but it’s equipped with the weaponry needed for a multi-role ship. It also has a very cool aggressive swept look.

It has a spacious interior capable of accommodating six players, with a full living quarters, a captain’s office, an engineering bay, a hangar, and a modular area that can be adapted to a variety of operational needs.

The three modules available are the cargo module, which greatly increases cargo capacity, the recycling module, which allows you to pick up canisters from mining ships using a tractor beam and recycle the collected materials, and a medical module with several beds.

The ship is made for a group of friends who want to experience different aspects of Star Citizen gameplay.

Another brand new ship is the Anvil C8R Pisces, which has just become available and is a variant of the existing Pisces, but mainly designed as a small space ambulance.

By the way, as part of the current promotion, you can try the game for free until November 30th.

Meanwhile, the total amount of crowdfunding has just exceeded $520 million and currently stands at $520,223,785. The number of registered accounts has just passed 4.2 million, reaching 4,226,473 so far. We previously learned that about 1.7 million of them actually purchased the game.

Star Citizen will be released sometime in the 21st century.

Call of Duty Warzone 2.0: the streamer Forsen declares that the game has 'ruined his PC'