What phase of the Marvel Cinematic Universe are we in now? I really have no idea, just basically watch the movies I want to see (most recently “Doctor Strange in the Multiverse of Madness”), but don’t really follow the cinematic guide laid out by Kevin Feige. Luckily, Second Dinner’s new deck of cards based on Marvel Super Heroes doesn’t have to, either. Marvel Snap is easy to learn, highly addictive and doesn’t take long to play!

What is it: Each player has a deck totaling 12 cards. Each card represents a Marvel character with a cost, power level, and special ability (there are also those without an ability, but these are in the minority). At the start of each round, players simultaneously place one or more cards face down in one of three locations, similar to lanes from Gwent (by CD Projekt Red). However, the locations here also have random effects that are revealed round after round. At the end of each round, cards are revealed and special abilities of cards are triggered. Whoever has the highest number of points at a certain location wins that location. The object of the game is to win at least two of the three locations. The game typically lasts six turns, each of which awards an increasing “Energy” to play more powerful cards (similar to Hearthstone). 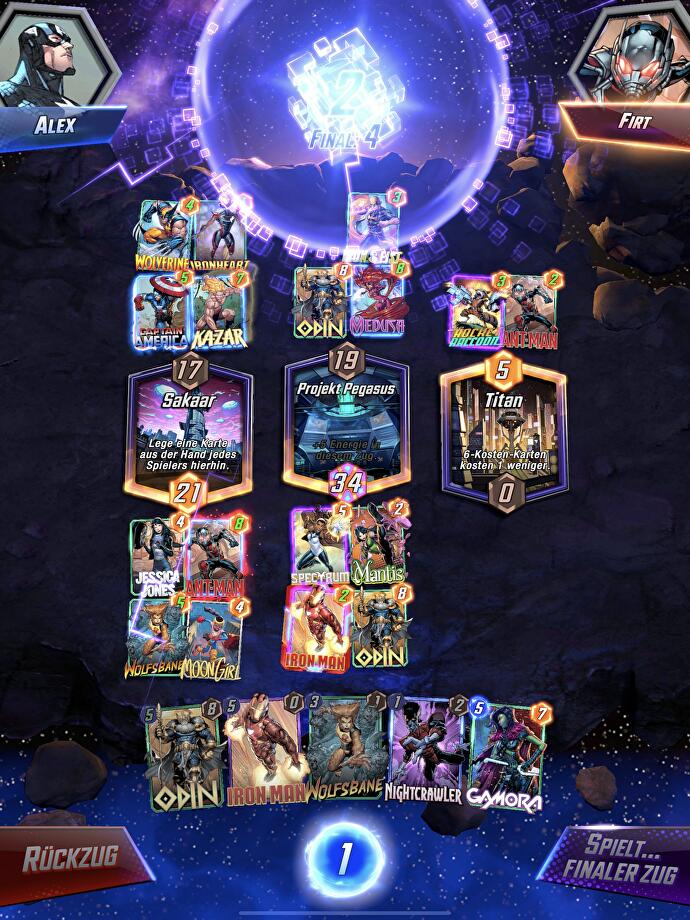 At the top in the middle is the cube for “snaping”, below that are the three lanes (Sakaar, Project Pegasus and Titan) to which each player can place their cards.

Players move up the game’s leaderboard by collecting “dice”. A game begins with a single die as a bet, but a player can always double the bet by “snapping” (borrowed from the Infinity Gauntlet), giving their opponent the option to withdraw or agree to the snap.

The most common card effects include:

Discover: The effect in question takes effect as soon as the card becomes active and after both players have finished their turns. This is not to be confused with placing the card on the field, which simply means placing the card in a way that hides it from your opponent.
Ongoing: The effect of the card lasts as long as it remains face-up on the field. These cards can be destroyed or disabled by certain characters, although they almost always persist for the entire game.
Move: A card effect that allows you to move either that card or any other card on the field. The applicability of this effect varies from card to card, with some even allowing you to move enemy cards.
Destroy: Cards with this effect have the power to permanently destroy other cards and remove them from the current match.
Take off: An effect that causes players to discard a number of cards based on certain conditions. These cards are simply returned to the deck and NOT destroyed.

Given these effects, it’s important not only to build high-strength decks to smash matches in the last few turns, but also to build strategies based on synergies that can help keep your opponent guessing about your true intentions and possibly gaining the upper hand on the lanes early on. 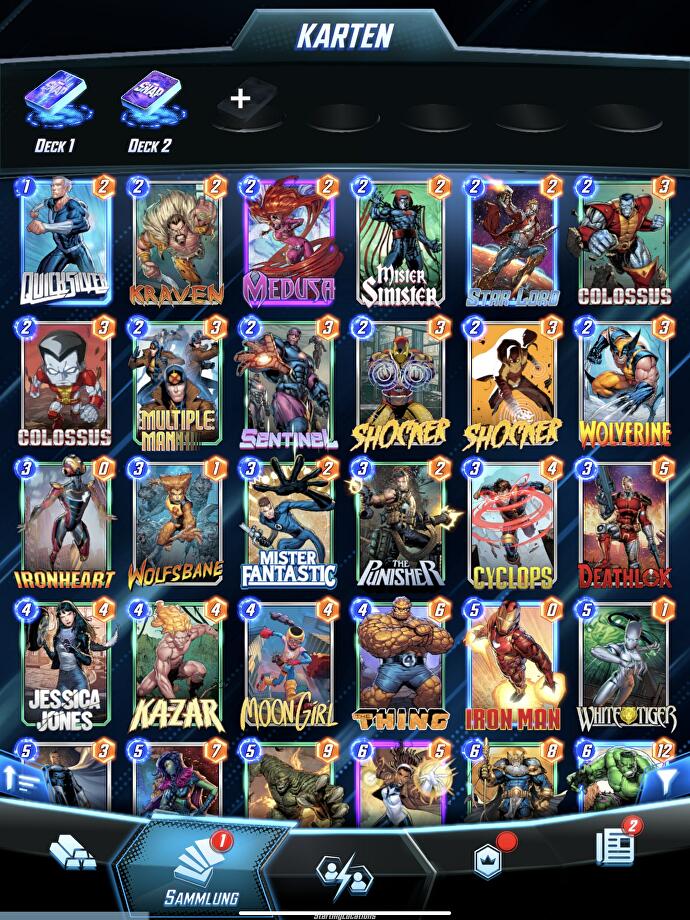 Of course, better cards have better effects, but they also cost more and can only be played later.

Each card in this game has a rarity value, which can consist of different levels. However, these rarities are purely cosmetic and do not affect the performance of the card in any way. However, upgrading the cards is the only way to increase the collection level and thus unlock new cards and receive boosters, credits and other great prizes. Simply put, upgrading cards requires two main components: credits and boosters. The former is the default in-game currency, used for shopping but also for upgrading the maps. The latter, on the other hand, are specific to each card and are only obtained by adding said cards to the deck and using them during matches.

We don’t want to write a complete tutorial for Marvel Snap here, but we hope that we were able to give you a good first impression. So if you’ve gotten the urge to play the card game yourself, just try it out on your smartphone or PC. A well-designed tutorial explains the easy way to get started, and then there’s nothing stopping you from having loads of fun with the Marvel heroes.

Employment: Spot the signs of a toxic corporate culture right from the job description | NextPit

Fire Emblem Engage - Nintendo explains the use of Marth and Co. - Cerealkillerz in the new gameplay trailer

Free Games on PC: a sci-fi platformer and multiplayer FPS among the new Epic Store gifts