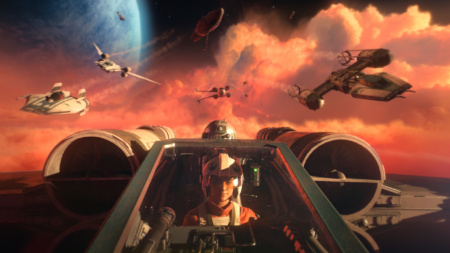 The digital distribution service Epic Games Store has launched another round of free distribution of games. This week, users can add to their collections the space action Star Wars: Squadrons, released in October 2020.

Star Wars: Squadrons is a first-person space simulation game. It will allow players to take part in space battles as pilots of the Empire or the New Republic. The game takes place after the events of the sixth episode of Star Wars, “Star Wars. Episode VI: Return of the Jedi. The story campaign follows the New Republic Vanguard Squadron and the Galactic Empire’s Titan Squadron. Both of them converge in the battle associated with the completion of the Republican project “Starhawk”. In addition to the single player campaign, a multiplayer mode is also available with team and single missions.

You can get Star Wars: Squadrons for free at the following address on the Epic Games Store. We also suggest that you familiarize yourself with the review of the game in one of the previous materials.

Warhammer 40,000: Darktide - Oops, that's more Vermintide than I was hoping for!

Xbox Series S: on offer at the incredible price of 229.90 with Black Friday