Blizzard named the next dates of important announcements for Overwatch 2 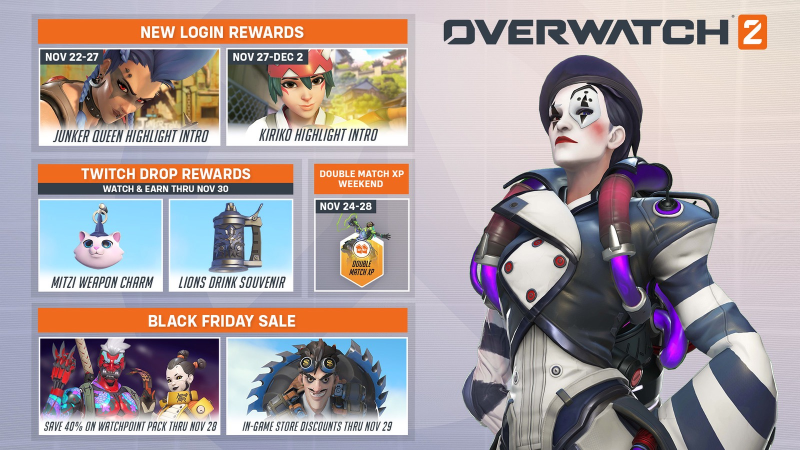 Blizzard has published a visual sign about what awaits you in Overwatch 2 in the coming days.

November 26 at 10:55 AM PDT: Ramattra gameplay trailer premiered on YouTube. November 27th: Ramattra developer news release. Until November 27th, you can log into the game and get the Five Fingers Queen of Vultures screensaver of the best moment of the match. From November 27 to December 2, you will be rewarded with a highlight screensaver on Kiriko “On the Wind” as a reward for entering. Until November 30, you can get the Mitzi mascot and the Lion Drink souvenir for watching any Overwatch 2 stream on Twitch. From November 24 to November 28, Double XP Days will take place in the game (experience will be doubled only for completing matches). Double XP will be activated on November 24 at 10:00 pm Moscow time. Until November 28, there is a 40% discount on the Observation Post Bundle, which includes the Season 1 Premium Battle Pass, Cassidy and Soldier 76 Legendaries, and 2,000 Overwatch Coins, which can be used to purchase Battle Passes for the next two seasons. The in-game store also has discounts on new cosmetic items until November 29th. November 29: Season 2 trailer premiere + Season 2 content release plan. December 2: New map announcement. The second season will start in-game on December 6th.

“Dnepr-1” – “Apollo”: the battle for the Eurospring