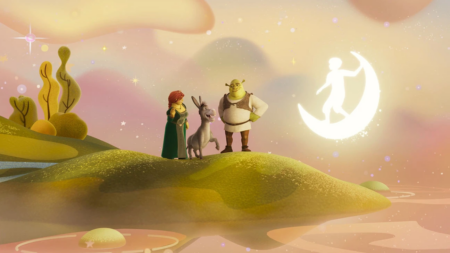 The updated DreamWorks Animation intro, which the team has been working on for 8 months, will allow you to re-acquaint yourself with the characters of the studio’s most popular franchises.

The video will debut during early screenings of Shrek’s animated spin-off Puss in Boots: The Last Wish on November 26 in the US, ahead of its theatrical release on December 21.

DreamWorks Animation is proud to unveil our brand new animated logo! ⭐️ Be the first to see it in theaters with an early sneak-peek of #PussInBoots: The Last Wish, Saturday, November 26th at 2pm local time. Tickets on sale now: https://t.co/TqLhdyIJn8 pic.twitter.com/7BpQBHTiRi

“We bring dreams to life on screen, so the idea was to bring viewers into our world by taking a child through a dream and introducing them to the iconic characters we have been creating over the years,” says production designer Kendal. Cronkite.

“Moon Boy” will not go anywhere from the DreamWorks intro, but it has been slightly modified and turned into “Moon Child” so as not to emphasize the gender of the hero.

“We love the idea that we now have a one month old baby. We wanted everyone to like it,” says producer Susanna Buirdzhi.

The very appearance of animated characters has also been slightly updated – for example, Fiona, Shrek and Donkey have been modernized in the light of the current technological progress in animation.

The opening also offers a new interpretation of the studio’s fairytale theme music created by Harry Gregson-Williams (originally composed with John Powell for Shrek). The tune features more stringed instruments (unlike other studios that rely on horns and brass) to create a “celebration” feel.

DreamWorks Animation released its first Antz movie in 1998 (still under the DreamWorks Studios brand) before becoming a separate entity in 2004. Since its inception, the studio has released more than 40 films – this list includes some of the most profitable animated films of all time.

Chainsaw Man, Makima's cosplay from Shirogane_sama takes off our muzzle

NFT: France has great ambitions for the sector

President of Argentina: “This December will forever remain in our hearts”