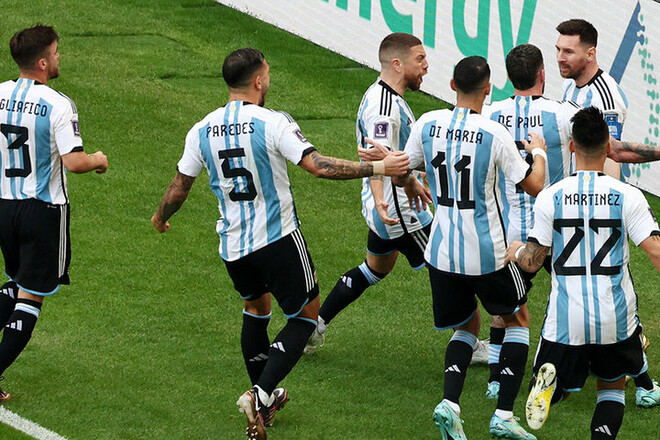 We invite you to familiarize yourself with a selection of the main news and materials on Aroged for Saturday, November 26.

1A. Messi factor. The Argentina national team put the squeeze on Mexico in the second half
The Argentines won and will continue to fight for the playoffs

1B. Double Mbappe. France put the squeeze on Denmark in the last minutes
Deschamps’ team goes through the tournament without a loss

1B. Lewandowski and Szczesny bring Poland their first victory at the 2022 World Cup
The Poles coped with a sensational opponent

2A. Favorite rake. Dynamo failed to open the defense of Metallist 1925
Mircea Lucescu’s team did not hit the opponents’ goal even from a penalty

2B. Rural football in the UPL: Ingulets beat Veres in the home swamp
The football field in Petrovo clearly does not meet the requirements of the Premier League

3A. Hurricane beat the Serbian Loznica in the Champions League, and now we need the defeat of Sporting
Ivano-Frankivsk club won 2:1 with goals from Shved and Mospan

3B. Futsal Champions League. Barça’s nightmare, Hurricane’s chagrin. Who made it to the semifinals?
Benfica, Sporting CP, Anderlecht and Palma Futsal advanced to the semi-finals

4. Prometheus beat Ventspils in the Latvian-Estonian Basketball League
The Ukrainian club is in the lead after 10 matches, having 9 wins and 1 loss

5. Big money. Ronaldo received a fantastic offer from Al Nasr
The Portuguese striker left Man United due to a conflict with the coach

7. They would have fought for medals: the exclusive team that did not make it to the 2022 World Cup
Pogba, Holland, Salah, Benzema and the Italians are there

8. Dillian White narrowly beat Franklin on points. And will fight Joshua
One referee even declared a draw in a match at Wembley Arena in London.

9A. Declassed and advanced to the final. Snigur will compete for the trophy in Luxembourg
Ukrainian woman dealt with Magali Kempen in two sets

9B. Ukrainian tennis player reached the final of the Challenger for the second time in his career
Alexey Krutykh will compete for the trophy at the tournament in Valencia

9B. Lost to the Russian. Bindl failed to reach the final of the tournament in Uruguay
Ukrainian in two sets lost to Diana Schneider

9G. Final big eggs. Australia and Canada will play the Davis Cup
For the first time since 1990, there will be no European team in the Davis Cup final

10. 32 under-23 talents that could shine at the 2022 World Cup
Blogger Aroged – about the main young talents of the tournament