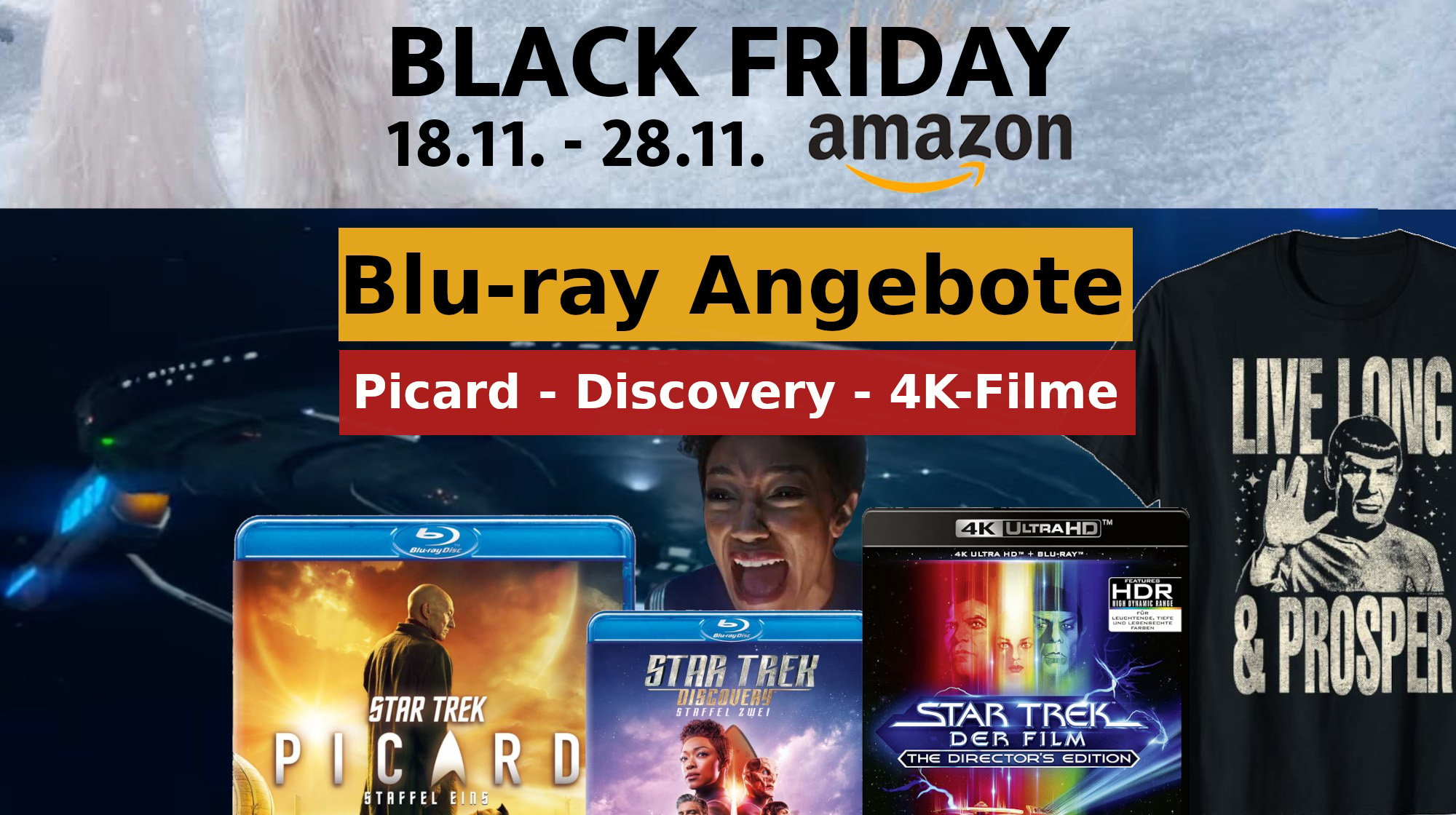 The third season of Star Trek: Picard is known to start on February 17th in Germany. Before Jean-Luc Picard and the former TNG crew embark on their final adventure, Star Trek: Strange New Worlds kicks off December 8th on Paramount+. At this point, Star Trek: Discovery will also be available again in Germany – so far you could only watch the fourth season on the linear streaming provider Pluto TV or buy it digitally. There are three reasons to recall old episodes and films. In line with this, Amazon is selling various season boxes and films more cheaply during Black Friday week. The fourth season of Star Trek: Discovery is not cheaper yet, but you can pre-order it.

If you don’t yet own a Blu-ray drive or a console equipped with one, you can of course also grab the DVD box. These can be found under the same links, you just have to change the medium on the product page. Star Trek: Picard – Season 1 as a Black Friday offer is currently only 22.97 euros instead of 29.49 euros, and the first three seasons of Star Trek: Discovery are also cheaper.

What is striking about the films: 4K Blu-rays of various Star Trek films that were only released a few weeks ago are also changing hands for less money. The Director’s Edition of Star Trek: The Movie stands out because it was only available in DVD quality for 20 years. The 4K release of the films from the Kelvin timeline is not entirely new. The screen appearances of the reboot crew are not without controversy among fans, but for the sake of completeness they should not be missing in any Star Trek collection.

Unfortunately, many Star Trek series and films didn’t make it into the Black Friday sale. You don’t have to pay huge sums for it. With the complete edition for Star Trek: The Next Generation, which consists of seven seasons with almost 180 episodes and all kinds of bonus material, you only pay 62.99 euros – nine percent less than the median price of the last 90 days.

Those who like to show off their fan status can also buy T-shirts with Star Trek logos and slogans with a Black Friday discount from Amazons. A bathrobe based on Jean-Luc Picard’s series uniform seems to be particularly popular. Allegedly, Star Trek and Star Wars fans have little in common – at least that’s the old camp thinking. We think that’s outdated and also refer to some Star Wars and science fiction deals below.

A new start is imminent for Season 3 of Star Trek: Picard: characters like Elnor and Rios are deleted and, in return, the old guard is brought back up. Joining Patrick Stewart as Jean-Luc Picard and Jery Ryan as Seven of Nine are LeVar Burton as Geordi La Forge, Michael Dorn as Worf, Jonathan Frakes as William Riker, Gates McFadden as Dr. Beverly Crusher and Marina Sitis reprise their roles as Deanna Troi. Brent Spiner will appear at least as Data’s brother Lore, along with Daniel Davis as holographic Professor Moriarty and Michelle Hurd, known from the first two seasons, as Commander Raffi Musik.

Exciting Black Friday deals: Amazon has this until November 28th. to offer

Amazon uses the annual Black Friday week to sell its own products cheaper. These include, for example, Fire TV Sticks, Echo speakers, Fire tablets and e-book readers from the Kindle series. Across all manufacturers, attempts are also being made to open up larger groups of buyers with categories such as memory and PC components.

Black Friday originally comes from the USA, where it traditionally takes place on the Friday after Thanksgiving, which in turn falls on the fourth Thursday in November. Strictly speaking, Black Friday should only take place on November 25th. However, Black Friday weeks have long been common. The end usually marks the so-called Cyber ​​Monday on the following Monday, this year November 28th.

Angel DI MARIA: "Today we were able to give joy to people"