Despite the fact that the Lavapotion project saw early light in May of this year, that is, at the time of writing, six months have passed, Songs of Conquest is damp in many places. It is localized into Russian, and very well, but the fonts still sometimes move out. I want more content, I want more castles, stories, brains for AI.

And the truth is, I want to. Because Lavapotion does it. Songs of Conquest is both a declaration of love for the legendary HOMM3 and by no means an attempt to rest on its laurels. It has its own world, and its own visual style, reminiscent (especially when the picture is zoomed in) of the once popular lamp dioramas for pixel games. 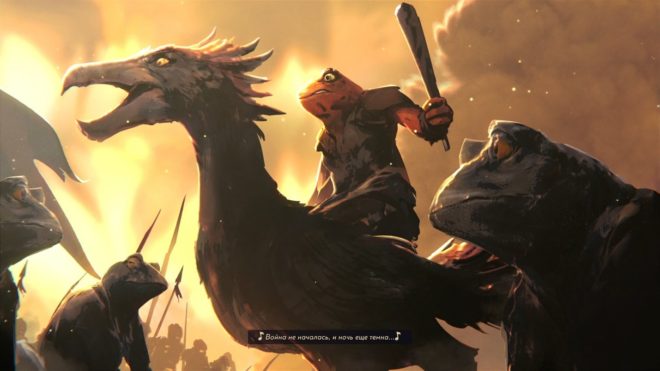 Why, the developers even got confused, and composed poems for the beginning of each story chapter, and songs performed by a local bard for each chapter outcome. Combined with charming, but far from being as ambitious as in HOMM3 music, and a fairy-tale plot, abundantly sprinkled with lore-revealing dialogue, it turned out to be something extremely cozy.

To date, the game features two campaigns. The Song of the Stouthearts tells of the young but spiritually strong Baroness Cecilia, whose period of rule fell on difficult trials. The Risen Company… no, no. It’s not about the Undead. She tells about Rask, a young wound (local lizardmen), who managed to escape from slavery, and now he has a long way to go home – to his native swamps. 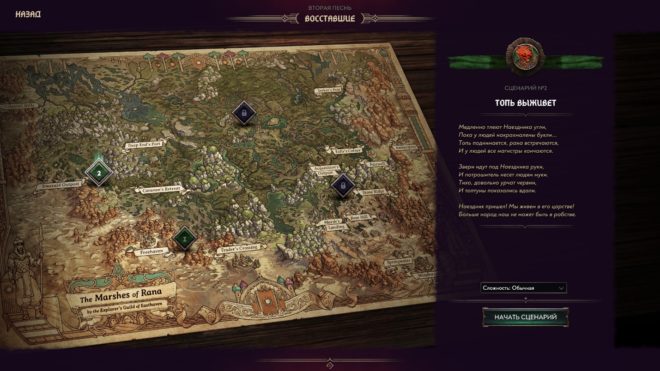 In a word, we have something in between “Castle” and “Stronghold” (people and druids) and “Fortresses” (swamp), but with their own nuances and a much larger number of factional units. Small story missions, accompanied by a system of detailed hints, will introduce players to the stories of the world and not yet playable factions, as well as all the mechanics that will come in handy in multiplayer and user games.

For the most part, they are familiar to anyone who has touched the work of New World Computing. So, we are exactly the same traveling around the world as a hero, in whose pockets a whole army is hidden. Gathering resources, finding fertile places and artifacts, fighting opponents and other heroes in turn-based battles, capturing castles and choosing which of the abilities to pump for the levels obtained. 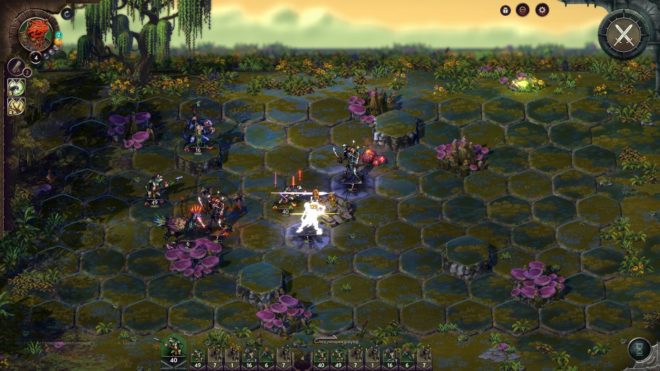 But there are also striking differences. For example, masters (that’s how the heroes are called in this game) can constantly receive various modifiers from a variety of sources scattered across locations in order to receive a wide variety of bonuses to characteristics that act in battle or on the global map.

The magic in the game is made according to a completely different principle from HOMM3. Here, each unit, completing each turn, gives the master a certain amount of essence of a certain type: order, chaos, arcana, creation or destruction – depending on the type of unit. The book, or rather, the scroll, is already filled with spells of all disciplines, but in order to use any of them, you must accumulate the specified amount of essence. 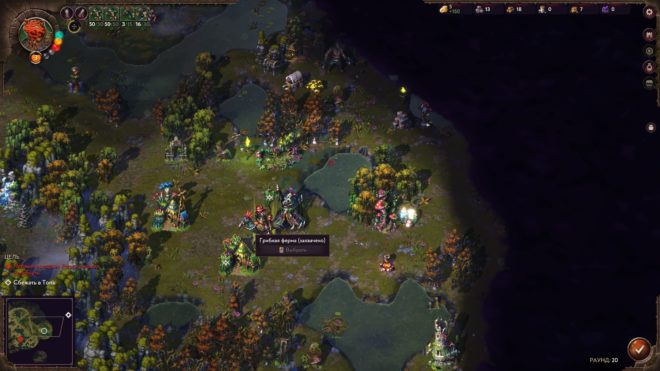 In fact, if you look at the scroll, you can see that there is another, as it were, sixth discipline that requires not a specific entity, but several units of two types of entities. Thus, when choosing a unit for the army, you also determine the types of spells that you can use thanks to the magical power collected from them.

The game provides a research system, a separate menu is allocated for it. These are some kind of talent branches of your faction, for the development of which it is necessary to build and defend a certain building. The buildings themselves are built outside, not inside the castle, as in HOMM3, and can be looted or even burned down by the enemy. 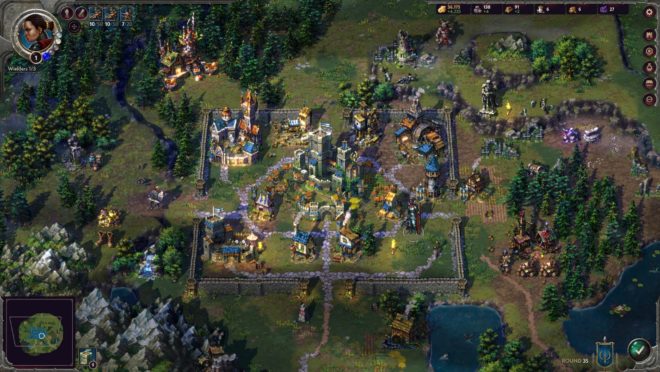 There are four research milestones for each of the research buildings. Some of them will buff your faction creatures, others will increase your resource growth, and others will increase your squad size. And yes, it is limited by game mechanics here, as well as the number of units that you can take under your wing – new slots are unlocked with the growth of the “leadership” parameter.

Battles also seem to be familiar, but with their own characteristics. So, initially everyone has a conditional “tactic” in order to be able to start positioning. On the battle map there are numerous, but destroyable obstacles, as well as hills that increase the radius of destruction of rifle squads. And yes, I didn’t make a reservation, the rifle squads here have two radii of destruction, and the radius of the “sure shot” allows you to inflict double damage on the enemy who is within it. 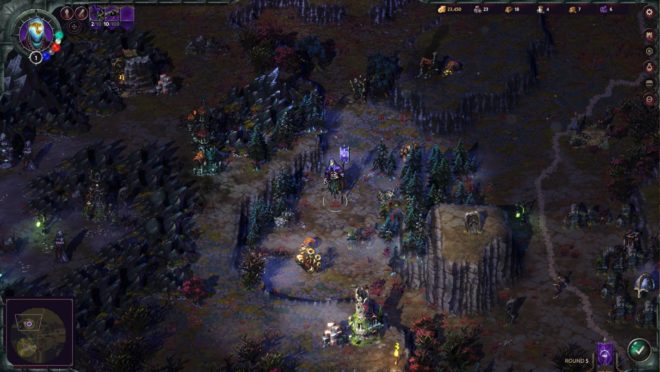 Most units have “free attack” by default. This is the name of the zone of control here – the radius of hand-to-hand combat, movement within which will cause an immediate attack by the enemy. Together with the various magical abilities of the casters, the peculiarities of the landscapes and the units themselves, it turns out like a familiar battle, but requiring completely different tactics.

By leveling up, a master can expectedly increase one of his skills, but at the eighth level, as well as at the 16th, 24th, and so on, you can choose a special skill – a unique skill that emphasizes your style of play. Thus (including) the unique builds of the heroes of Songs of Conquest are formed. 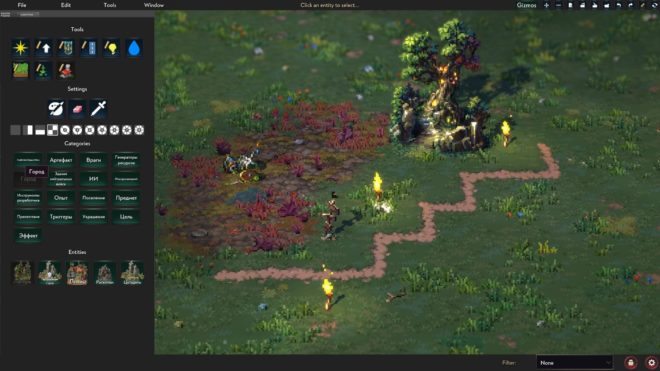 Most of the buildings in towns and settlements can be improved, and in the main town hall you can hire and resurrect masters who fell in battle. In a word, the hero here does not leave for good in case of defeat, however, he shares artifacts with the enemy who defeated him. Of course, if he was also a master.

Songs of Conquest features online multiplayer and hotseat multiplayer, as well as solo, customizable battles and a map editor that’s still a bit crude. And this is where two more factions appear – the Necropolis (undead) and something like the Citadel with goblins and trolls join us. 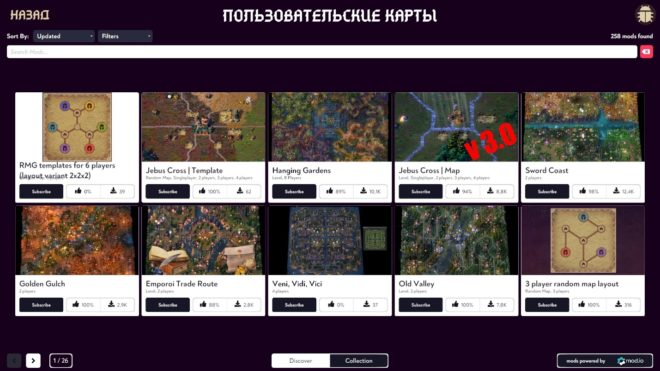 Another section of the main menu will offer players to try custom scenarios by downloading them straight from the game’s collection. To date, there are several hundred of them – there is something to do, in a word.

Songs of Conquest makes a very positive impression. And, if you treat this game as a tribute to the tradition of “Heroes”, which, nevertheless, the authors present with many interesting and non-borrowed solutions, I’m sure you will like it too. Recommended!

Silence - It may be the solution to electrical problems!

Here are the best audio deals from Cyber ​​Monday 2022 - Aroged

IO Interactive: Project Dragon will be multiplayer and have microtransactions