Tracking compliance with the requirements to control the process of driving an electric car in the case of Tesla algorithms has so far been limited to detecting resistance on the steering wheel, although cars of this brand have long been equipped with cameras facing the driver. Now the software will more often identify drivers who are trying to imitate the presence of their hands on the steering wheel and thereby deceive the automation. 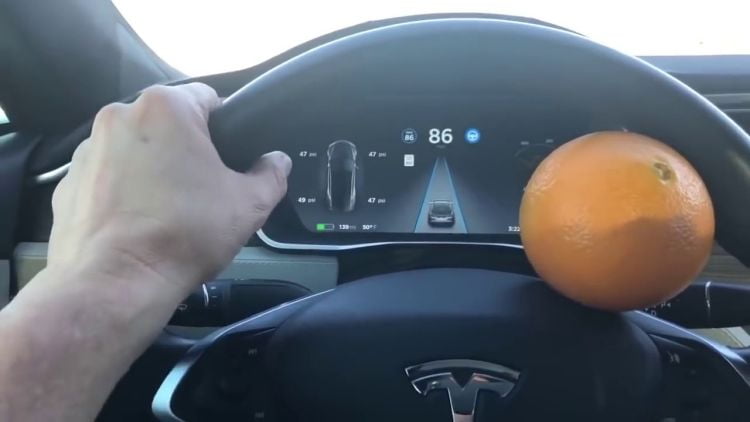 In order for the movement to continue in automatic mode, the Tesla driver must hold the steering wheel every two minutes, creating a certain resistance to rotation on it, by which the on-board system sensors understand that the person is keeping the situation under control, as required by the rules. Inventive car owners have learned to deceive the sensors, creating an imbalance when turning the steering wheel. Someone put water bottles or any other fairly heavy objects under the steering wheel rim, and some companies even tried to mass-produce special steering wheel pads that deceive the automation. Their sale was quickly banned by US regulators, and the manufacturer failed to return to the market with such products even after they were disguised as a mobile phone holder mounted on the steering wheel.

According to Teslascope, in the beta version of FSD v10.69.3.1, the software learned to identify some ways to cheat automation in terms of requiring you to keep your hands on the wheel. The list of detected methods of deception will be constantly expanding, and if the automation detects such attempts, it will forcibly turn off active driver assistance systems and smoothly stop the car if the driver refuses to comply with the requirements to take control. The use of a camera inside the cabin, which looks at the driver, will also expand. She already knows how to follow his gaze and allows the on-board system to warn a person if he is distracted from the road.

The Last of Us Part 2: a cosplay of Ellie ready to assassinate

Got a new computer? This is what you need to install!