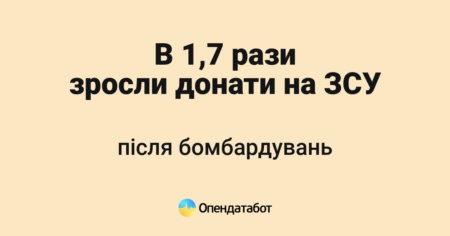 During the days of massive shelling of civilian infrastructure by Russians, Ukrainians correctly converted their rage, namely, they more actively supported the Armed Forces of Ukraine. This is confirmed by statistics – in October alone, donations to three popular charitable foundations of the country – United24, “Turn back alive” and “Prituli Foundation” – amounted to 1.5 billion hryvnia, according to OpenDataBot.

The largest revenues were recorded on the United24 platform, where, among others, a collection initiated by the president for a fleet of marine drones is now taking place. Over the six months of the platform’s operation, more than UAH 6.8 billion have been transferred to the accounts of the NBU.

Ukrainians transferred 83% of the funds or UAH 5.6 billion to the accounts of the Armed Forces of Ukraine. UAH 745 million, or 11% of the total amount, was received into the account for medical assistance, while only UAH 429 million, or 6% of the amount of receipts, fell on humanitarian aid. 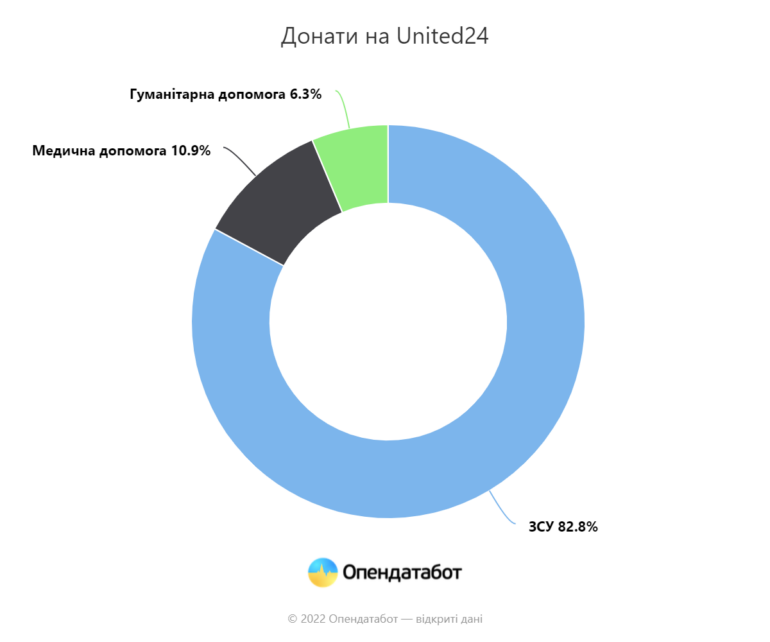 More money was donated in July — UAH 2.24 billion. The main surge in the volume of receipts falls on the week from 04 to 10 July. Then the Ukrainians donated UAH 1.86 billion, which is 83% of all July receipts. This probably happened after the tragedy with the shelling of a shopping center in Kremenchug.

In August and September, on average, Ukrainians donated UAH 90 million per week.

After the first big bombing of the energy infrastructure from October 10 to 16, the amount of donations increased by 36% in a week. Shelling next week increased support for the Ukrainian Armed Forces by 2.8 times — by UAH 251 million.

Since the beginning of Russia’s full-scale invasion of Ukraine, the Turn Back Alive fund has raised almost UAH 5 billion. As in the case of United24, the number of donations and their amount increased significantly after the start of massive shelling of infrastructure in October. For the period from October 10 to 16, Ukrainians donated UAH 108 million, which is 1.6 times more than a week ago.

A similar situation occurred after the massive shelling in November. So, from November 14 to November 20, Ukrainians replenished the fund’s accounts by UAH 140 million, which is 2.3 times more than a week ago.

The Prytuli Foundation collected more than UAH 3 billion in 9 months from the big invasion. Like other charitable foundations, the number of donations after the start of mass shelling of civilian infrastructure has increased significantly – more than 3 times a month.

Now the power engineers continue to eliminate the consequences of the shelling on November 23, which led to a partial blackout. Ukrainian intelligence has previously warned of a high risk of another massive missile attack on Ukraine this week, and President Volodymyr Zelenskyy, in an evening address on November 27, suggested that the week of November 28 could be the most difficult. Prior to the strike on November 23, NSDC Secretary Alexei Danilov said that Russia has the resource for 3-4 massive strikes, equivalent to the attack that took place on November 15.

Eye chests in Hogwarts Legacy: where to find and how to open

BlueWalker 3 deployed – the largest ever commercial communications satellite with an area of ​​​​64 m² and a field of view of 777,000 km² – Aroged