November 28th, 2022 at 9:32 a.m. by Valentin Sattler – The Geforce RTX 4090 Gallardo from Manli, known for its spirit levels, has now become even more unusual: A Japanese company has added an AiO water cooling system to the custom design, while the original air cooler is still used.

The current graphics card generation is still comparatively young, but there are already some extraordinary custom designs. While the focus has been more on their power plugs lately, there were particular concerns about sagging graphics cards when the RTX 4000 GPUs were launched. Matching this, Manli launched the Geforce RTX 4090 Gallardo, which has two integrated spirit levels. But that’s not all: This already special custom design has now become even crazier.

The Japanese company Sycom, which offers complete PCs, took the RTX 4090 Gallardo as a starting point and subsequently adapted it for its own systems. According to the corresponding pictures, almost the identical air cooler is used, but recently two hoses protrude from the graphics card. Apparently, the original Sycom vapor chamber was replaced by a water cooler, on which the original cooler is mounted. 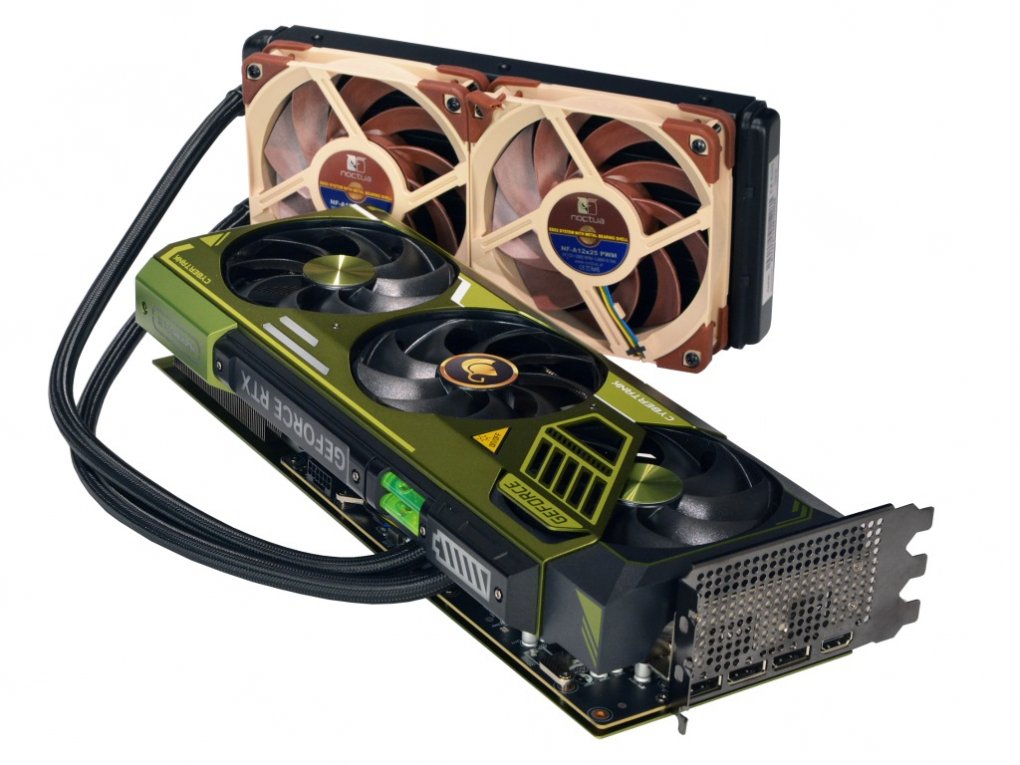 The Manli Geforce RTX 4090 Gallardo is now also available with a mix of air and AiO coolers. Source: GDM

This water cooler is factory-connected to the Asetek Hybrid GFX 240 mm radiator, on which Sycom in turn installs two of Noctua’s NF-A12x25 ULM. With this alone, the RTX 4090 should already be able to be cooled without any problems, but the original air cooler is also said to be in operation. With this unusual solution, the custom design is said to reach maximum temperatures that are 10 to 15 °C lower than with the air cooler alone. And of course the two spirit levels are included again.

Unfortunately, Sycom does not provide exact pictures of the inner workings of the adapted graphics card. Tests of the unusual custom design should also be difficult for the time being, because the graphics card is not offered alone. Instead, the company only sells the model as part of a complete PC. With the RTX 4090, this costs a whopping 4,130 euros, whereas a system with the RTX 4080 costs 3,540 euros.

Over the past day, the Armed Forces of Ukraine destroyed 510 invaders, a helicopter and 8 UAVs