VIDEO. Tin in Turkey. Shot a rocket launcher at people, beat the goalkeeper 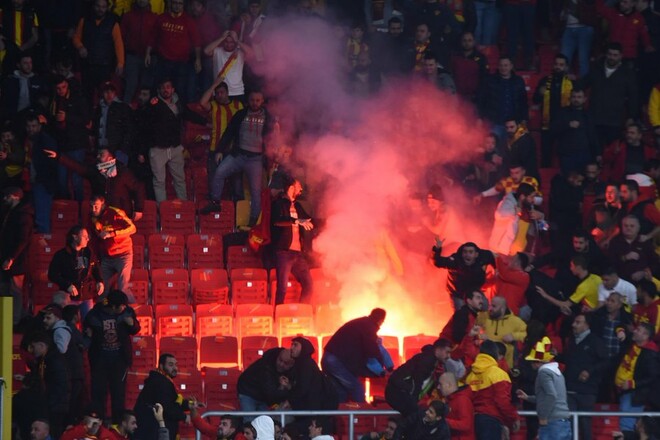 On November 27, in the match of the 15th round of the first league of Turkey “Göztepe” – “Altai” there was too much going beyond the traditional framework of football matches.

First, the guests’ fans fired a rocket launcher at the hosts’ podium, injuring three fans, two of them children. After that, riots broke out at the stadium.

The moment of the flare that caused the injury of a Göztepe fan pic.twitter.com/LPuoM0vFtf

Events that caused the Göztepe – Altay match to be postponed. Fireworks started from the Altay tribune to the Göztepe Family tribune. As a result of the flare thrown, 3 fans, 2 of them children, were injured. It was said that our supporter, who was seriously injured, was in serious condition. #GÖZVALT pic.twitter.com/E378yTR8dN

At one point, a fan ran out onto the field, ran up behind the Altai goalkeeper and hit him twice on the back with a corner flag.

The team of referees made the right decision not to finish the meeting, its fate will be resolved later. At the time of the stop, the score was a draw – 0:0.

Goztepe vs Altay in Turkey was interrupted after a fan attacked the Altay goalkeeper with the corner flag… 😧pic.twitter.com/ylfsSKmrxM

A Yakuza plays it TOP CHEF on Netflix!

Hogwarts Legacy: Still number one on Steam, protests slow down