Amazon Prime Gaming: These are the free games in December

After there was a corresponding leak recently, Amazon has now officially nailed it when it comes to the line-up at Prime Gaming in December. Here we give you the usual overview. 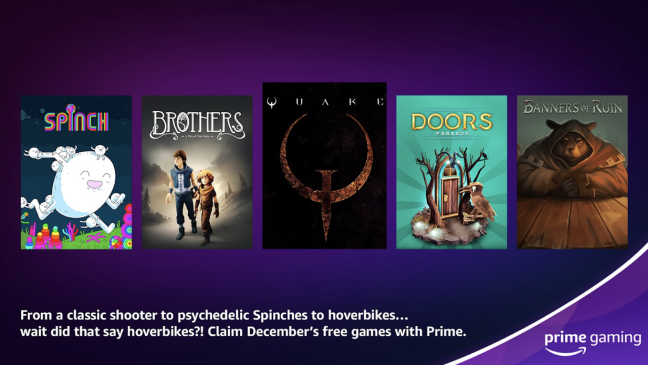 Starting tomorrow, December 1st, Amazon Prime Gaming will have eight free full versions up for grabs. The previous leak is also confirmed in essential parts, because all titles mentioned are part of the game. In addition to the shooter classic Quake, Brothers: A Tale of Two Sons is probably the most important and well-known representative.

According to official information, the complete line-up reads as follows:

Quake – Defeat the ancient evil that threatens humanity. To do this, corrupted knights, ogres and an army of corrupted creatures must be defeated in four dark dimensions. Fight in plagued military bases, ancient castles, lava vaults and gothic cathedrals in search of four magical runes. Rose Riddle 2: Werewolf Shadow – Solve the mystery of the Werewolf Shadow as Rose Riddle, a master detective and forced princess. Travel from one beautiful location to the next, gathering clues and solving crimes to avert the impending disaster. The Amazing American Circus – Take charge of a run down circus and assemble your troupe, manage the circus camp, explore Gilded Age America and impress your audience. Become the director of a show the world has never seen before. Banners of Ruin – Gather your party! Win the war by building a deck and fighting in a series of turn-based battles with up to six characters in the cities of Dawn’s Point. Brothers: A Tale of Two Sons – From visionary Swedish director Josef Fares and world-class developer Starbreeze Studios, you guide two brothers simultaneously through an epic tale. Solve puzzles, explore different locations and face boss battles to bring back the “water of life”. Spinch – In the title of award-winning Canadian cartoonist Jesse Jacobs, players leave the material world behind as Spinch. The hyper-agile organism is on a mission to rescue its missing offspring in this psychedelic sidescrolling platformer. Desert Child – Escape the earth before it explodes. Play as a young, hungry hoverbike racer to collect bounties, race and do whatever it takes to get to Mars and win the Grand Prix. Doors: Paradox – Unravel this mysterious adventure about chaos by making your way through a series of handcrafted 3D scenes, collecting useful objects, finding hidden clues and solving fun puzzles.

Apart from the free full versions, there will also be plenty of free game content for current titles and long-running hits in December. A special package in FIFA 23 was recently confirmed for the FIFA World Cup in Qatar. You can already pick up seven rare gold players, two player picks with at least 81, twelve rare consumables, an Erling Haaland on loan for 15 games and eight player picks between two World Cup players for FUT.

Animal Crossing: a cosplay of Ankha, the kitten from Egypt

GTA 6: the game publisher takes out the fangs after an uncontrolled buzz