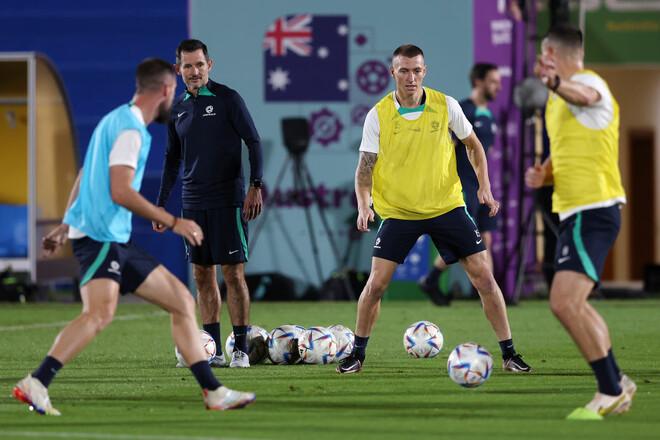 On Wednesday, November 30, the match of the final round of the group stage of the 2022 World Cup will take place, in which the national teams of Australia and Denmark will play. The starting whistle will sound at 17:00 Kyiv time.

The Socceroos were considered outsiders of the D quartet, but after two rounds they are second in the standings with three points, which were scored thanks to a minimal victory over Tunisia (1-0) four days ago. The Australians could also catch on for points in the opening match, when they were the first to score against the reigning world champions – the French.

As a result, the Australian team lost to France 1:4, but this is already in the past. Ahead of the duel for reaching the playoffs, in which, probably, the team of Graham Arnold will be enough to draw. This is provided that the French do not lose in a parallel match to Tunisia, which has one credit point and a better goal difference than the Socceroos.

The Scarlet Guard, like Tunisia, has only one point in its assets, scored in a face-to-face meeting with the Africans (0:0) in the first round. But with the French (1:2), the team of Kasper Yulmann failed to keep a draw: Kylian Mbappe, who scored a double, scored the winning goal 4 minutes before the end of regular time.

However, almost everything is in the hands of Denmark. It is she, according to the bookmakers, who should take the second ticket to the 1/8 finals of the tournament. It’s definitely not worth waiting for an easy walk in a duel with the Australians, but the Danes are definitely able to win with a minimal advantage, which, most likely, will be enough to complete the task.

We believe that Denmark will win this match. Our bet will be the position – P2 with a coefficient of 1.53 on the Parimatch line.

Kyiv-Basket inflicted the first defeat on the BIPA club, Mavpy won for the first time