When we hear Microsoft, most of us probably think primarily of the Windows operating system or the globally used MS Office. In times of pronounced home office, one or the other may also think of the communication software teams. The oldest brand in the house of Microsoft is neither Windows nor the “relatively young” games division Xbox – it is the Microsoft Flight Simulator. THE flight simulator par excellence has had its home with the developer from Seattle for 40 years now. By the way, the Flusi, as fans like to call it, exists for almost exactly a third of the time that people conquered the sky for themselves. Almost 120 years ago, the Wright brothers took to the skies in a powered vehicle for the first time. The whole “flight” lasted only 12 seconds, but on the same day the flight time was increased to almost a minute. Many years before that, inventors like the German Otto Lilienthal had conquered not just the sky with their gliders, but the air a few meters above the ground.

Incidentally, you learn such things in the Technikmuseum Berlin, which also served as the stage for Microsoft’s party for the 40th birthday of the flight simulator. The developers looked not only into the past, but also into the present and the future of the flagship product Microsoft Flight Simulator (buy now €69.99).

The past of flight simulator 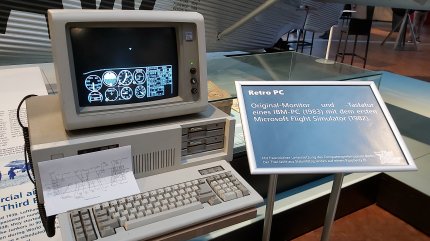 A Cessna cockpit, eight instruments and a handful of scenes in the USA. That’s it.

Graphically, the whole thing was more reminiscent of a Texas Instruments pocket calculator and there was no question of realistic simulation, but the Flight Simulator was successful nonetheless.

Incidentally, we were able to convince ourselves of this at the birthday event. Because the Berlin Computer Games Museum dug up an old IBM computer from 1983 and installed the original version of the first flight simulator. Spoiler: As far as I can remember, no journalist, developer or influencer even got the plane in the air at the event.

We were also able to experience the rest of the history of the flight simulator. In the Classic Walk, the developers had built up all the important milestones in history. This included Version 3 (1988), which allowed multiplayer for the first time, or Version 4 (1989), thanks to which players could design their own airplanes. 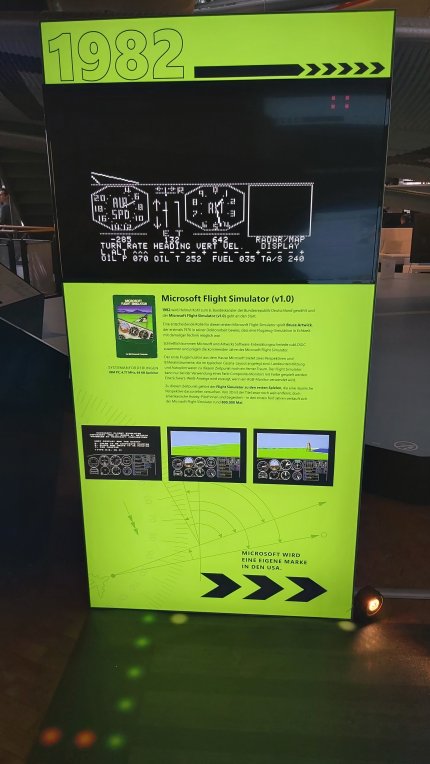 The Classic Walk presented the features of the individual versions in detail. Source: PC Games With version 5 (1993), photorealistic fittings were used for the first time and full 256 colors were supported. The 6th version (1996) is better known to many as Flight Simulator 95, and was one of the first entertainment programs with which Microsoft wanted to boost sales of the new Windows 95 operating system.

Simulations have always been successful, especially in Germany. Whether farmer, highway policeman, truck driver, astronaut or pilot – the Germans are a nation of simulation fans. At least that is what the statements on the part of Aerosoft, who were there in the form of co-managing director Andreas Mügge and shared their experiences, show.

After all, Aerosoft is the largest producer of add-ons for the flight simulator series. Of course, he didn’t elicit any concrete figures, but revealed that within the company, the following markets each account for around a third of sales: Germany, the rest of Europe and the rest of the world.

And the customers are by no means young gamers, but old hands pursuing their passion. This was revealed by Eckard Voss, chairman of the FSC eV – yes, there really is a registered flight simulator association in Germany. All categories are represented there, from professionals to jokers, and even with four dozen apprentices, you are still a youngster here.

The presence of the flight simulator

After 40 years of history, today with Microsoft Flight Simulator 2020 we undoubtedly have the best flight simulator ever for a standard PC or console.

But how realistic is it really? None of us editors can answer this question without leaning very, very far out of the window. But those who can answer the question are real pilots. And they were also present at the event. Among others, Pascal, not only the operator of the YouTube channel AeroNewsGermany, but also a professional pilot.

That '90s Show: Netflix reveals the release date of the new series