Despite rising inflation since the beginning of the year and a difficult geopolitical situation around the world, shipments of smartwatches in the third quarter of 2022 increased by 30% in annual terms. The largest growth, at 171%, was shown by India, which for the first time became the largest smartwatch market in the world, although other markets with the exception of China and Europe showed positive dynamics, according to Counterpoint Research analysts. 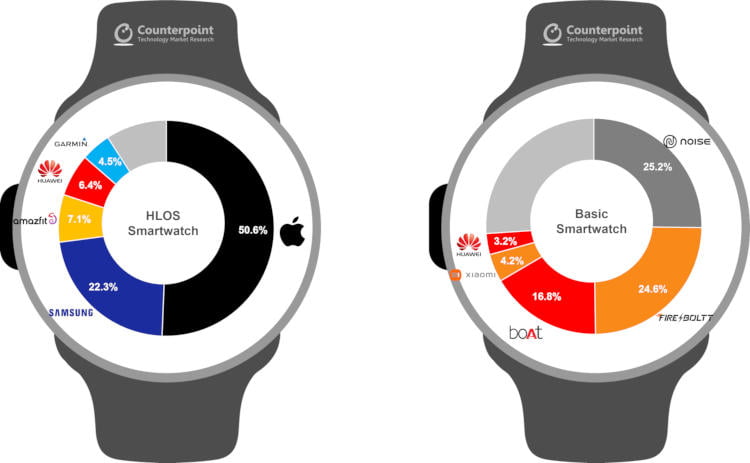 The most powerful growth factor was smart watches running basic software platforms without the ability to install third-party applications: in the third quarter, their shipments more than doubled compared to the same period last year and reached 35% of the total market. Shipments of high-level OS (HLOS) smartwatches like Google Wear OS and Apple watchOS also increased by 23% year-on-year. Stronger performance indicators indicate that the market is expanding towards cheaper base models, although revenue from HLOS gadgets due to higher average selling price (ASP) is almost ten times higher than budget segment devices.

The strong sales of the Apple Watch 8 smartwatch released in September allowed the American manufacturer to increase sales by 48% in annual terms. The latest generation models accounted for 56% of the total shipments. In general, Apple in the III quarter accounted for about half of the HLOS-watch market, but still less than in the II quarter, when the company occupied 54% – the reason for the decline in sales in North America and Europe, which are the main markets for the company .

Samsung released the Galaxy Watch5 series during the reporting period, showing a quarterly growth of 62% and increasing its share in the HLOS segment by 5% compared to the previous quarter. Compared to the third quarter of 2021, Samsung increased shipments by only 6%, which is why it lost ground in India, falling below 3%. In the global market, the Korean manufacturer retained its second place, reducing its share by 2.7% in annual terms, and the gap with the Indian Noise, which took third place, narrowed. 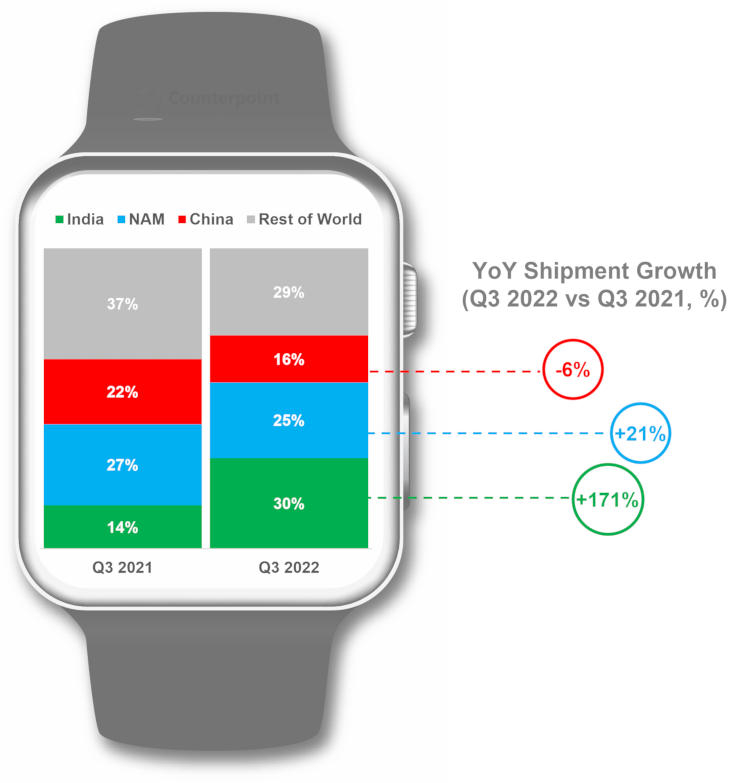 Noise sales grew by 218% compared to the third quarter of 2021 – the company became the first in India and the third in the world after Apple and Samsung. But less than 1% behind the local leader was another local manufacturer, Fire-Boltt, whose market share did not change compared to the previous quarter. However, the company lost the domestic lead to a competitor, but retained the fourth place in the world.

Huawei posted a 65% year-on-year growth, but for the first time since 2018, it shipped nothing to India in the third quarter. The Chinese manufacturer again ranked fifth in the world. Like the other two Indian giants, the world’s No. 6 boAt operates with entry-level products and has also surpassed 2 million units shipped in the quarter. Finally, Garmin did not change its delivery figures compared to last year, but managed to increase revenue by 11%: its ASP was $365 higher than that of Apple.

For the first time in the region ranking, India led the world with its smartwatch market growing 171% in the third quarter. The main driver of growth in the country was the holiday season. Local brands are expanding the range of inexpensive products and increasing local production. Bluetooth calls turned out to be the most important function for consumers (available in 58% of the total number of devices), in addition, the local buyer loves smart watches with large displays – more than half of the gadgets received screens with a diagonal of 1.5 to 1.69 inches.

From Q4 2020 to Q2 2022 The world’s largest smartwatch market was North America, which is still growing at 21% year on year, but a sharp increase in sales in India pushed America to second place. But China, with its tough pandemic policy and economic recession, showed a drop of 28% year on year – the market volume in the country has been declining for the fourth quarter in a row.

Google has announced Bard, a “rival” AI to ChatGPT

Disney refutes rumors about its purchase by Apple

"An ungovernable anger is growing in me", Emmanuel Macron does not please everyone on YouTube!

Porto – Atlético – 2:1. Madrid have been eliminated from European competition. Goal video and review