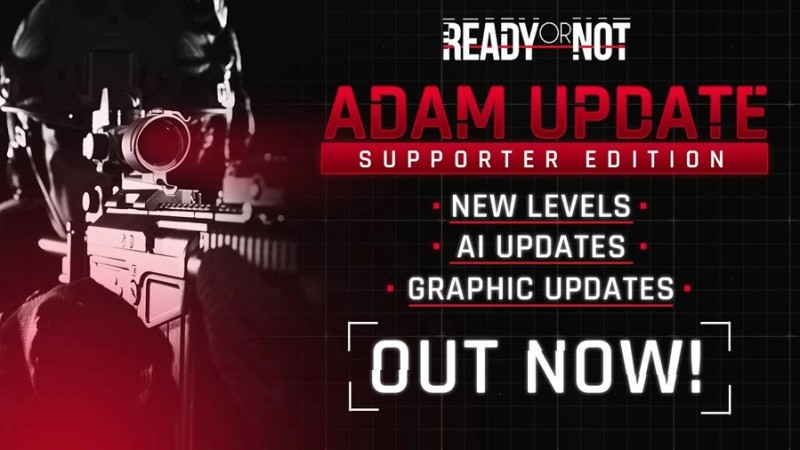 November’s Ready or Not update has arrived and it’s the game’s biggest update yet. The Adam Update brings five brand new levels, four weapons to get comfortable with, and a host of new AI behaviors that should make your next run more tactically challenging and demanding.

Back in June, Void Interactive released the biggest Ready or Not update to date, bringing new maps and physics elements to the game. However, the new update surpasses it in size with a number of significant additions, including additional weapons, overhauled civilian and suspect AI, and new audio additions.

First, you will get five new stages: Agency, Data Center, Ridgeline, Hospital, and Importer. In addition to the new stages, lighting has been reworked in existing levels, as well as muzzle flares and other light sources in the game. The devs say that maps with mods can now look brighter than usual, so if you’re a Ready or Not modder, be sure to check your maps.

The game also features four new weapons: the P90 submachine gun, the MP7 SMG, the SPC9 carbine, and the M11 Compact pistol. Various elements of weapon physics have also been changed, including bullet penetration values ​​and bullet nulling, which you will probably notice on a more subtle level.

Void Interactive claims that the AI ​​of suspects and civilians has been “completely overhauled”, with both types of AI now weighing the best decisions for their situation based on a “math system” rather than chance. Suspects will now take hostages, use vents or slots to avoid players, and detect players more realistically. Civilians will try to avoid firefights by hiding, and depending on the circumstances, different profiles and behaviors of civilians will operate.

Other changes include a host of new sound effects for weapons, levels, and destruction, as well as animation changes. Several game modes on the Hotel map have been removed pending a level overhaul, so stay tuned. Overall, the Ready or Not Adam update is quite a big one, so be sure to check out the patch notes to get an idea of ​​all the new features.

Elite Dangerous: Odyssey - Attack of the Thargoids - The latest chapter in the ongoing story

New info leaked: You can’t do all that in Hogwarts Legacy