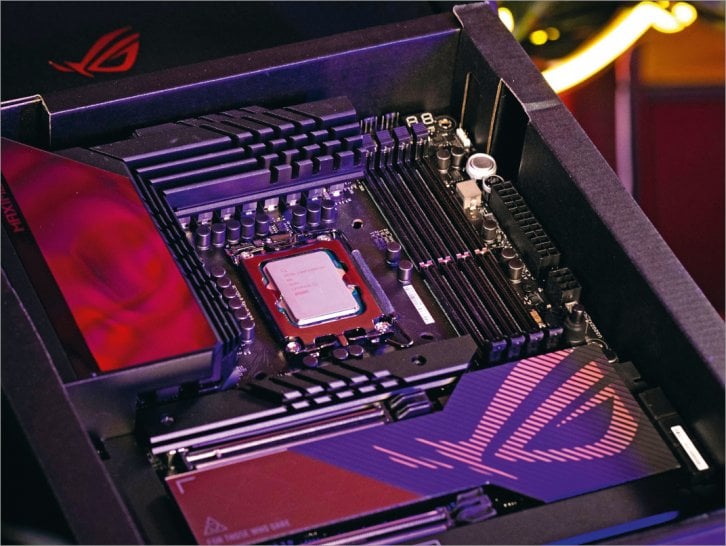 12/01/2022 at 08:32 by Maximilian Hohm – Intel’s power-saving feature DLVR can be found in the UEFI of various Asus boards with Z790, but seems to have been deactivated on the hardware side to date. With DLVR, the voltage of the CPU can be regulated more precisely and, in theory, up to 20 percent less power consumption should be possible. So read more about the feature below and why it could still be used on Socket 1700.

AMD’s and Intel’s new processors have once again reached a new maximum consumption, but at the same time they are very efficient in everyday use. Both companies are constantly working on making the chips even more efficient, as this will make them more competitive, especially in the enterprise segment. Intel’s latest plan for this was a feature called Digital Linear Voltage Regulator (DLVR), which was actually supposed to start on the market with Raptor Lake and make the processors up to 20 percent more efficient.

The company has patented the functional principle behind it and wanted to use it to reduce power consumption. In cooperation with the mainboard, the processors should be equipped with a voltage regulator that should enable power management that is improved by up to 20 percent. But Intel’s 13th generation of processors has already been released, Intel hasn’t hit the drum in this regard and otherwise there are almost no signs of DLVR on Socket 1700.

32:14
Ryzen 7000 motherboard buying guide: The best X670E boards featured and what to look out for

An option in the UEFI of various Asus boards with a Z790 chipset makes it clear that this is not just a forgotten announcement. These offer the “CPU DLVR Bypass Mode”, where users can choose between Auto, enabled and disabled. Apparently, however, the function is deactivated, because no matter which of the three options is selected, the power consumption does not seem to change. This is confirmed by the in-house overclocker “Shamino”.

According to its information, Intel has disabled the feature on the Raptor Lake processors, but would like to keep the option open to use it on future chips. This in turn raises the question of what Intel means by this. Officially, Raptor Lake is the highest expansion level of Socket 1700. The Meteor Lake chips are said to come on a new socket, so the feature on Z790 boards only makes limited sense. On the other hand, if Intel plans another refresh for Socket 1700, the feature could be used and the buyers of Alder or Raptor Lake would have a possible upgrade path.

For Chivalry 2, a major update "Winter War" has been released, weighing 7.5 GB

Epic Games Store: Today there are new free games for everyone - that's what you can expect

“I have no idea what’s going on, but I like it!”: the trailer for the fantasy adventure about dressing up Infinity Nikki impressed and puzzled gamers

Aroged: US may transfer Abrams to Ukraine to become an example for Germany

The Last of Us: Season 2 confirmed as the series is a resounding success