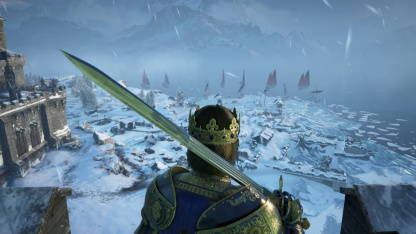 Medieval action Chivalry 2 got an update “Winter War” (Winter War), where they added a fresh map and a battle pass. In the new location, players will need to break into the fortress, overcoming severe weather conditions in the form of ice and snow. The capture of the castle takes place in several stages, the last level of which should be the death of King Argon II. A new type of weapon, the combat staff, will also help in battles. The Battle Pass is available in free and paid versions (1000 in-game crowns), the main difference between them is the rewards themselves. But even in the first case, users will be able to get new items (armor, weapons) and local currency when completing tasks. Chivalry 2 (which supports crossplay) is available on PlayStation, Xbox и PC (Steam, EGS). By the way, in early October, more than 500 thousand new users joined the project – all thanks to the release of the action in Game Pass.Update TeaserBattle Pass More on Igromania Modern Warfare 2, Gotham Knights and other best October releases on Steam

Avatar 2: There are already ideas for parts 6 and 7 - who will direct then?

Tomorrow in WoW: Awesome buffs and nerfs for many heroes on November 2nd, 2022