FREE Steam Deck Every Minute at The Game Awards 2022, Not For Indonesia! • Aroged

The Game Awards are in sight. Who would have thought that this relatively “young” event managed to build an identity as one of the most important video game award events every year, and even become one of the most anticipated peaks. Some will watch it out of curiosity about which games won it, while not a few are more looking forward to the latest variety of game announcements in it. If you need an extra reason? He will now also be giving away the most expensive Steam Deck model for FREE every minute!

That’s right, you didn’t read that wrong. Valve will hand out 1 Steam Deck of 512 GB every minute at the upcoming 2022 The Game Awards. The user registration page for this event has been opened and during the event, every minute, a name will be drawn as the lucky winner to get it. Considering that The Game Awards 2022 can touch the mark in around 2.5 hours, this means we can anticipate that at least 150 units of the 512GB Steam Deck will be distributed later. 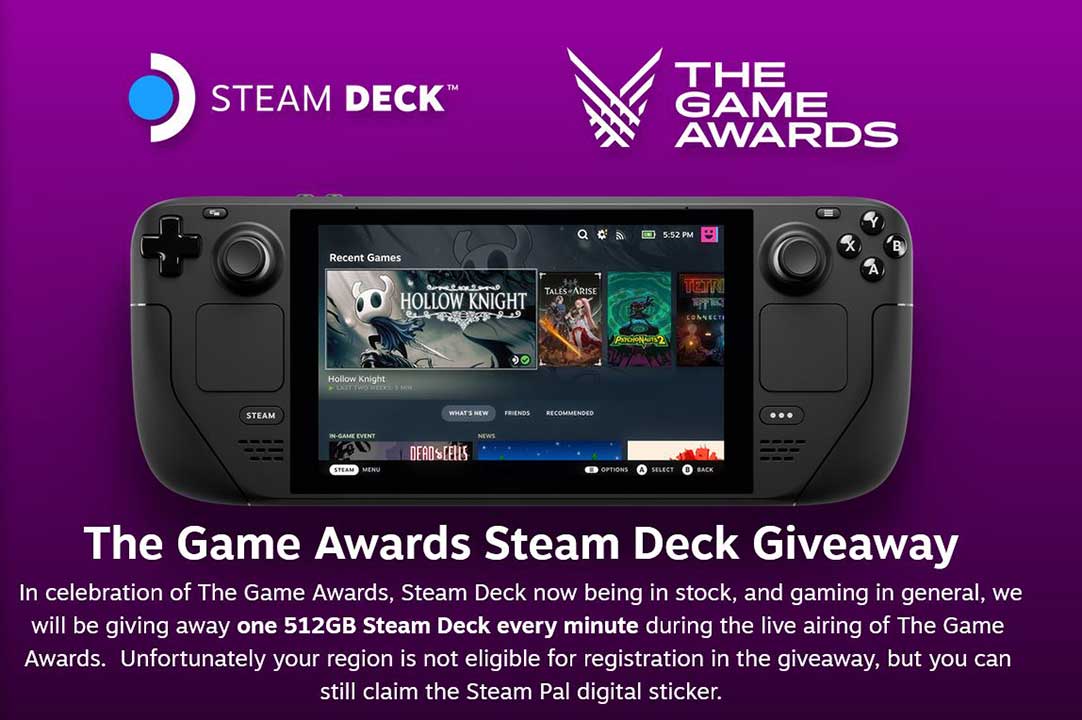 Valve will hand out one unit of Steam Deck every minute at The Game Awards 2022.

It’s a thousand pity, Indonesian gamers have to bite their fingers again. The FREE Steam Deck sharing offer during The Game Awards 2022 event only applies to gamers located in the United States, Canada, United Kingdom and the European Union. Gamers must also purchase something on Steam from at least November 14, 2021 – November 14, 2022 as confirmation of their country of origin.

It seems safe to say that the virtual audience for The Game Awards 2022 will be even bigger with Valve’s event this time. How about you? Interested in watching this one event?

Sable comes to PS5 with free content update for all platforms

PC gamer: you are not dreaming, this 1 TB NVMe SSD is at 69€ on Amazon

The Callisto Protocol: the horror game phenomenon of the moment owes a lot to PlayStation

Co-op puzzle game How 2 Escape is coming this year