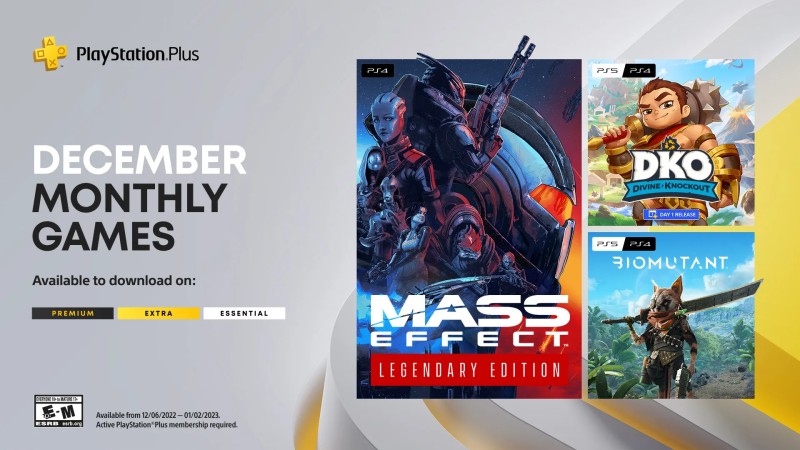 Sony Interactive Entertainment has announced the release of monthly games for December 2022 for PlayStation Plus Essential subscribers. All games will be available from December 6 to January 2.

The full list of monthly games is as follows:

Biomutant (PS5, PS4) – Combine hand-to-hand combat, shooting and mutant abilities in this legendary open-world post-apocalyptic kung fu RPG. A plague is destroying the earth, and the Tree of Life is bleeding from its roots. The tribes are divided. Divine Knockout Founder’s Edition (PS5, PS4) – Launching directly on PlayStation Plus, this third-person platform fighting game takes the genre to a whole new level. Deal damage to your enemies to make them vulnerable, then sweep them out of the arena in a unique third-person perspective. Mass Effect Legendary Edition (PS4) – Bring the legend of Commander Shepard to life in the acclaimed Mass Effect trilogy with Mass Effect Legendary Edition. Includes base single-player content and over 40 downloadable content from Mass Effect, Mass Effect 2, and Mass Effect 3, including promo weapons, armor, and sets remastered and optimized for 4K Ultra HD. Experience an amazingly rich and detailed universe where your decisions have profound consequences for action and outcome.

The list of PlayStation Plus Extra and Premium games for December 2022 will be announced later this month.

Russia began to identify illegal miners and bring them to justice