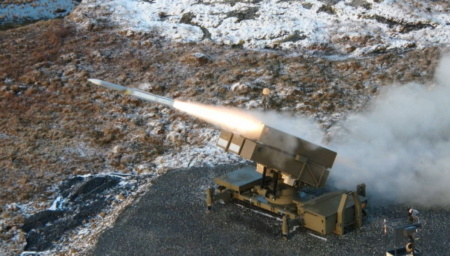 The US Department of Defense has awarded Raytheon a contract worth over $1.2 billion for the purchase of National Advanced Air Defense Systems (NASAMS), related equipment, services and spare parts for subsequent transfer to Ukraine. The work will be carried out in the United States, the contract will be completed on November 28, 2025.

According to Reuters, we are talking about six NASAMS complexes – no numbers are indicated in the Pentagon’s public announcement, this applies to both the systems themselves and auxiliary equipment and services. The previous contract for $182 million, concluded in August, provides for the supply of two complexes. With some degree of certainty, we can talk about plans for the delivery of eight NASAMS complexes.

Recently, the Minister of Defense of Ukraine Oleksiy Reznikov announced the arrival of NASAMS complexes in Ukraine. The American and Ukrainian military note the high accuracy of the systems, which is at the level of 90-100%. Batteries are integrated with other modern air defense systems into a single system.

Along with the supply of air defense installations, Ukraine needs a sufficient number of missiles for them. The number of installations makes it more likely to repel Russian missile attacks, which include dozens of simultaneous launches. The stock of missiles allows you to be quickly ready for the next attacks.