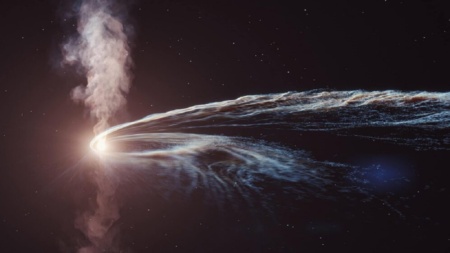 Such an event has not been observed for more than a decade: a flash of light erupted from the center of a distant galaxy was bright enough to be seen at a distance of 8.5 billion light years. An energy release equivalent to more than 1,000 trillion suns has been detected by the Zwicky Transient Facility, an all-night-sky survey conducted at Palomar Observatory, California.

“On Valentine’s Day this year, we found a mysterious source,” Igor Andreoni of the University of Maryland, lead author of one of two articles about the event, told the story of the sighting of the object. “Strange is good for science. This means that you have a chance to learn something new.”

For several days, astronomers around the world pointed telescopes at the flare, observing it in X-ray, radio and other wavelengths. It was extraordinarily bright and similar to a gamma-ray burst – a release of energy detected using gamma or x-ray observation devices. But this flash was seen by an optical telescope. This is the first time that such a jet of energy has been detected in the visible part of the electromagnetic spectrum.

The enormous brightness has led astronomers to conclude that it is most likely caused by the star being torn apart by tidal disruption. The star came too close to the supermassive black hole at the center of the galaxy and was torn apart by gravitational forces. Astronomers have already recorded dozens of similar events in recent years.

This case is unusual in that a huge jet of energy arose as a result of the event. In this case, the material was ejected from the poles of the black hole at a speed close to the speed of light. This jet is thought to have become particularly bright to observers because it was pointed directly at Earth, making it visible over a wider part of the electromagnetic spectrum.

“We don’t know why, but sometimes a very powerful jet of material is ejected when a star collapses,” Andreoni added.

To detect such fantastic phenomena, astronomers need telescopes that constantly scan large swaths of the sky and capture any sudden changes in brightness – which is what the Zwicky Transient Facility is. But such a technique captures thousands of changes in brightness every night – this mountain of data needs to be refined to identify the most interesting objects. Andreoni’s group looks for very fast optical events in such data.

Sudden changes in brightness could potentially be caused by a supernova explosion or the merger of two neutron stars. Further observations are needed to identify the specific event that caused the outbreak. A supernova, for example, gets brighter over the course of a few weeks, which is very fast by astronomical standards. But this given event developed even more rapidly, over the course of days and hours.

The group reported the outbreak to the international community, urging researchers working at various wavelengths to also monitor it. Event data was provided by 21 telescopes.

“When all the pieces of the puzzle were put together and put together, this amazing picture emerged,” Andreoni said. “We did not expect to find such a rare source, and certainly not in the optical range.”

Of the stars torn apart by black holes, only 1% produce such powerful emissions. Researchers are still unsure of their exact cause. When a star breaks apart and its matter is pulled towards the black hole, the energy of that matter is converted into light. It is hypothesized that the black hole’s magnetic fields and spin may work together to eject material from its poles.

“We are talking about a mass thousands of times greater than the mass of the Earth, which is being torn apart, spun and launched at a speed close to the speed of light. This is truly a unique opportunity to study something that cannot be reproduced on Earth.”

This tells astronomers something about the environment around the black hole – that it’s not as dense because it lets optical light through – and shows that optical observation could be a useful way to detect these extreme events in the future.

“We are talking about a mass thousands of times greater than the mass of the Earth, which is being torn apart, spun and launched at a speed close to the speed of light.”

The need to respond quickly to such events encourages greater flexibility in the design and construction of telescopes. Devices like the Hubble or James Webb are significantly overloaded – there are more applications for the time of using telescopes than the ability to satisfy them. The time of observations is carefully planned for years ahead, and every last minute of observation is filled to the maximum. But at the same time, telescopes are also needed that can respond to rare events within hours or even minutes.

It is difficult to safely and quickly change the direction of a space telescope, which is why Hubble and James Webb are only occasionally involved in this kind of research. But newly built ground-based telescopes, such as the MASTER network, specialize in scanning the sky for gamma-ray sources and immediately autonomously moving to observe them.

Andreoni said the international cooperation of researchers working with different telescopes and the ability of the equipment to respond quickly were necessary to make this observational breakthrough.

“It was extremely important for this kind of discovery. If we could not cooperate with other telescopes, we would not understand its meaning.”

Lost Ark x The Witcher: when does the event with Geralt and Ciri arrive in the West?

LEGO: the proposal of a set dedicated to Fantozzi and the "on the fly" bus made us smile