At today’s event, dedicated to the start of deliveries of the first mass-produced Tesla Semi electric trucks to customers, the head of the company, Elon Musk, spoke about the promising high-speed charging technology that will be implemented next year in the fourth generation of Supercharger stations. Megawatt power will be combined with 1,000 volts of on-board power, and Cybertruck pickups will also have the ability to charge at new high-speed stations. 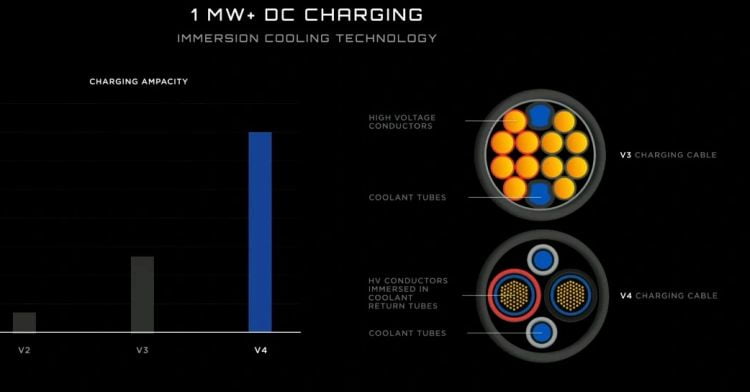 It is known that high-power DC installations are usually used to quickly replenish the charge of a traction battery, but the ability of the vehicle itself to receive a charge in this mode is determined both by the cooling conditions of the conductors and the battery, and by the voltage of the on-board network. At today’s presentation, Elon Musk said that the fourth generation of Supercharger charging stations will be able to deliver up to one megawatt of power, and the new type of charging cable will use an advanced liquid cooling system. In fact, the return line of the built-in liquid cooling system will cover the high voltage cables.

The new heavy-duty charging station will reduce the range replenishment time of Tesla Semi electric trucks. Construction of such charging stations Tesla will begin next year. Along the way, Elon Musk stressed that Cybertruck electric pickups will also be able to take advantage of next-generation high-speed charging technology. As Electrek explains, he also added that the 1000-volt on-board network used to create the Semi will eventually be prescribed in other vehicles, but did not specify whether the Cybertruck will be among them. Production of pickups, as you know, should start at the plant in Texas in the middle of next year.

It is noteworthy that the company management discussed the possibility of switching to a higher voltage of the on-board network of Tesla electric vehicles back in the spring of this year, but then it was about an increase from 400 to 800 volts, and only in the long term. Even then, company representatives expressed confidence that such a migration makes sense only for fairly large vehicles. In any case, for Tesla Semi, this plan will be implemented, judging by the content of today’s presentation, and with overfulfillment in terms of on-board voltage.

FLIC: I don't blame Spain for our relegation. I never look at other teams."