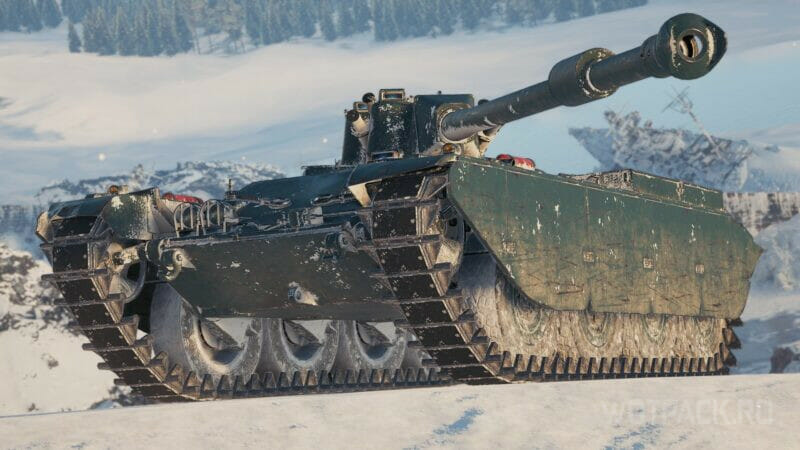 Char Mle. 75 in World of Tanks is a French Tier 9 premium light tank. Its feature is the presence of two speed modes, approximately like wheeled LTs, only it is a regular, caterpillar one. At the same time, the tank has a gun with a magazine for loading shells, which adds even more interest to the gameplay of this vehicle.

In the guide, we will go over its performance characteristics in detail in comparison with other tier 9 LTs, choose the optimal equipment builds and the order of perks for the crew. Let’s analyze the tactics of the game in a random house, taking into account the advantages and disadvantages of the tank.

An important feature of the tank is the change of speed. In the accelerated version, the maximum speed and power density increase, but accuracy, aiming time, visibility and turret rotation speed decrease.

Char Mle. 75 is equipped with a 100 mm gun with a one-time damage of 200 units and armor penetration of 200 mm on the base armor-piercing projectile, while the gold sub-caliber breaks 240 mm. If you look solely at these characteristics, then they are the weakest among the LT 9, but not everything is so simple. This gun has a magazine-loading system for 6 shells, and it does not fire single (cyclic) shots, but burst of 3 rounds. It turns out that in one click of the mouse, 3 projectiles fly out with a difference of 0.4 (0.6) seconds at once, each of which deals 200 damage, and after 3.5 seconds you can repeat the shot and go to the cooldown. It was because of the chip to shoot in a burst that they made him a very long reload of the drum.

His accuracy and information time are acceptable in normal mode, but you won’t be able to shoot anyone with the DPM due to the long reloading of the drum. It can potentially do about 1200 damage, provided that each projectile will penetrate, but such a rarity. Elevation angles -8…+15 allow you to play from the terrain. The high turret traverse speed contributes to active firefights, while it has good stabilization.

The tank has hidden catches, some “pros” are not so “pros” when it comes to practice. Read more in the “How to play” section.

The margin of safety is small, and the armor is, in fact, cardboard, but not enough to pierce it with land mines. Despite the low nominal armor, it ricochets from the sides and the tank has additional protection in the form of screens next to the tracks.

To test the penetration, they took the T-54 region. on gold sub-caliber shells.

Don’t rely too much on ricochets, it’s more of a nice rarity if someone doesn’t hit the top of the tank.

At this point Char Mle. 75 has no equal (except for the chariot), especially when the speed mode is activated: it accelerates quickly, goes faster than anyone, and also has a high chassis turning speed. In this case, this is not entirely good, because the tank skids very hard on turns. The stealth coefficient is minimal for LT 9, and the viewing radius is the smallest. 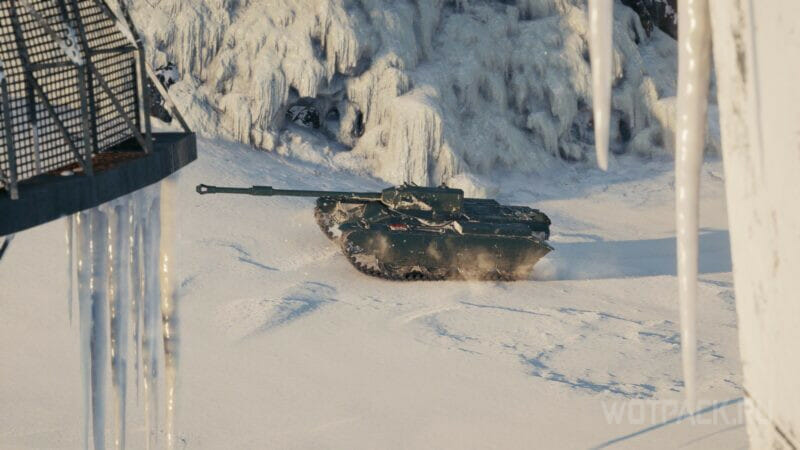 Summing up the performance characteristics of the Char Mle. 75 we can highlight its strengths and weaknesses.

Choice of equipment for Char Mle. 75

The tank is non-standard, because it is not the best for flare and is not suitable for dealing damage. It is difficult to find a balance, so here everyone should choose something for their style of play.

It is preferable to put trophy equipment.

The crew consists of 3 tankers, so combined specializations are indispensable:

We recommend the following order of learning perks:

Given the congestion of the crew, it makes sense to take a large first aid kit, because the role of the loader is performed by two tankers. If one of them gets a shell shock, then the already long reload will become even longer. To improve all the characteristics of equipment (here it will not be superfluous), you can put a national dish Strong coffee. 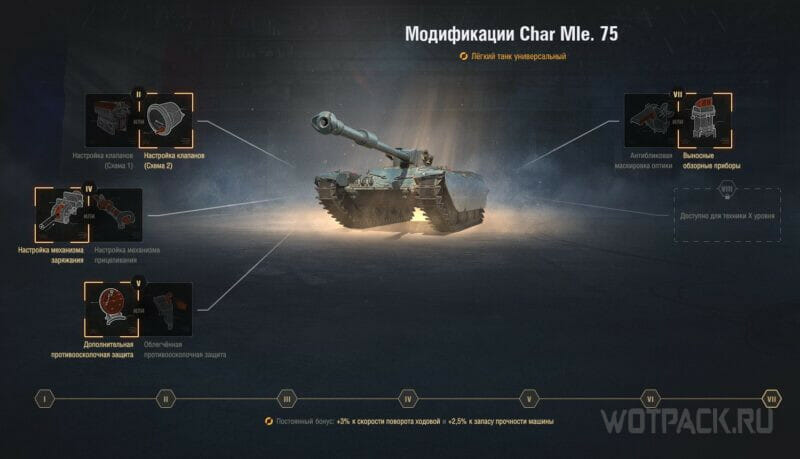 To upgrade this LT, we recommend the following modifications:

Valve setting to increase the maximum speed (a decrease in specific power compensates for the high-speed mode).
Setting up the loading mechanism – Be sure to speed up the reload.
Additional anti-fragmentation protection. It will slightly reduce the damage from those who like to shoot with land mines at the LT, and if you get under artillery, the crew contusion will pass faster so as not to reload for ages.
Remote viewing devices – you need to compensate for the low baseline visibility.

French light tank Char Mle. 75 at the beginning of the battle can play in the style of a “wheeler” and give an initial light or have time to take one of the key positions. Then look at the situation: if the allies are approaching, then play from passive light, and if there is no cover nearby, then do not wait for the weather from the sea and switch to active light in the team’s field of vision. 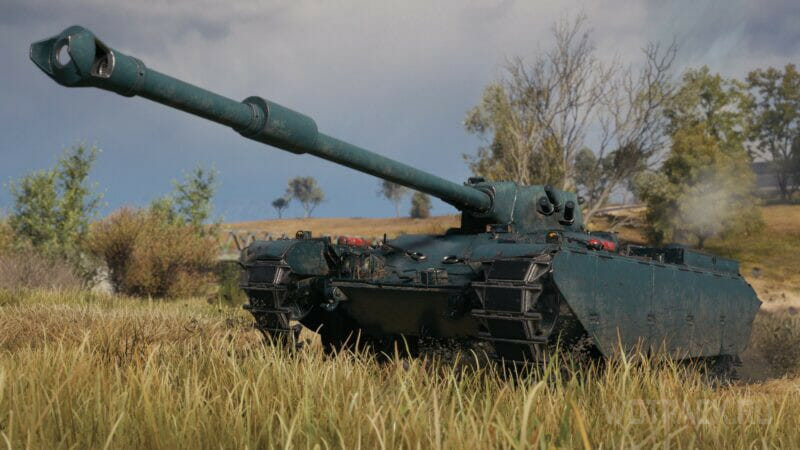 The problem with this tank is that it is completely dependent, it cannot solo fight and take care of itself. Let’s move on to discussing the problems:

Implementing a burst of 3 shells is rare and mostly against standing opponents. After the first shot, the other two fly out after him and you need to have time to move the gun behind the enemy. You cannot cancel the queue, that is, if you killed the enemy with the first shell, then 2 more will go into his destroyed tank. If two enemy shot cars drove out at you, and only one burst remained in the drum, then it is almost impossible to distribute these 3 shells among the enemies, only if they do not stand back to back. In dynamic skirmishes with other LTs or STs, it is also very difficult to hit with all the projectiles.

It turns out that the already weak weapon turned out to be very difficult to implement on the battlefield. Often situations can arise that half of the drum will go without damage, and then a long cooldown awaits, during which enemies can easily deal with Char Mle. 75. 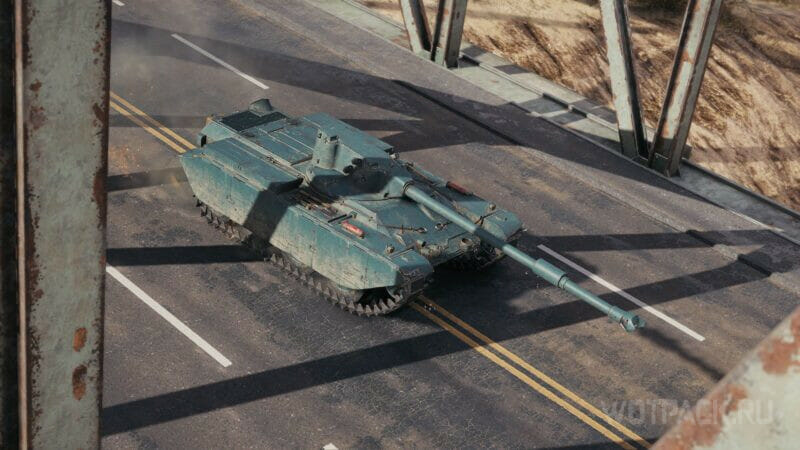 A few tips to help you get started:

Priority is fire on fixed targets. Always shoot ahead, keep in mind that after the 1st projectile there will be 2 more. Do not try to be a hero and get into 1v1 skirmishes. minimal. Keep an eye on the mini-map, use your speed to change flanks and help your allies defend/take the base.

Conclusion: is it worth buying Char Mle. 75?

Char Mle. 75 is a difficult to master and skill-dependent tank, which is not recommended even for average players. At first glance, he has interesting features, but their implementation in a random house is very disappointing.

The tank consumes a lot of silver, because it is played only on gold, and the damage is small + frequent misses. The developers tried to fit a lot of mechanics here, but in practice something extremely mediocre came out, no more than for a collection.

Write in the commentsWhat do you think of Char Mle. 75 in WoT, share your impressions of who knocked it out in Big Boxes.