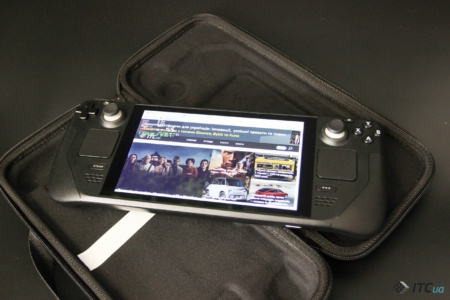 To draw additional public attention to the upcoming The Game Awards event, Valve has announced a Steam Deck console giveaway.

During The Game Awards, one Steam Deck will be given away every minute. Considering that the event will last at least 2.5 hours (and last year its duration reached 3 hours), we can focus on the distribution of at least 150 Steam Deck consoles (and at best up to 180 devices). The top configurations of the console, including 512 GB of internal storage and anti-glare screens, will participate in the draw.

To participate in the Steam Deck giveaway, you must log in to Steam on December 8 at the following address and watch the stream on Steam.TV on The Game Awards page.

Unfortunately, this offer is available only to residents of three dozen countries (USA, Canada, Great Britain and the European Union), the list of which does not include Ukraine.

“Unfortunately, it is not possible to register for the distribution from your region, but you can get a digital sticker with Stimchik,” the authorization page says.

However, given that a large number of Ukrainians have left for European countries, someone may be lucky enough to take part in the distribution and get Steam Deck for free.

There are a couple more restrictions for participants in the draw. To qualify for a prize, you need to have a Steam account with a good reputation (without active bans and blocks) and make a purchase on Steam during one year – from November 14, 2021 to November 14, 2022 (GMT time is taken into account).

Aroged: In Australia, they offer games with loot boxes to be marked with an “Adults Only” rating

The Fantastic 4 (Marvel) soon to be back with a Hollywood superstar? The rumor that panics MCU fans