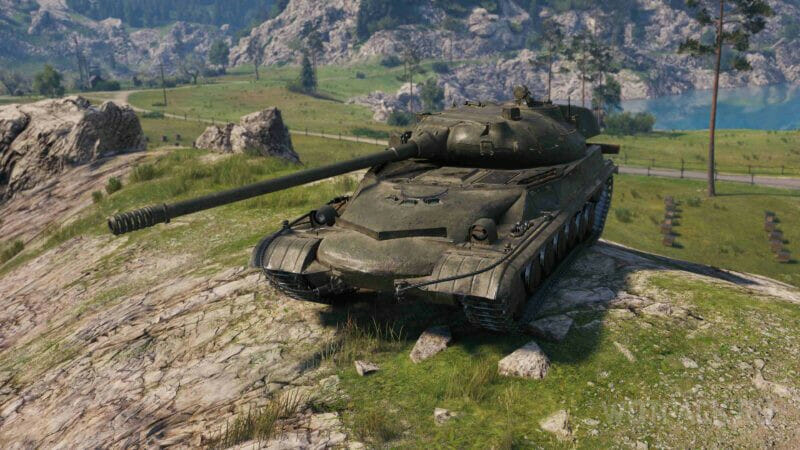 Object 283 in the World of Tanks is a Soviet promotional Tier 9 medium tank. Crew can be transferred to it from other STs without penalty, but it does not have an additional silver or bond earning factor. The main feature of the tank is the rear turret. For the first time, it can be obtained for tokens in the New Year’s Offensive 2023 Terminal.

In the guide, we will figure out what the car is like and compare it with classmates. After that, we will choose the best equipment builds, which perks to upgrade and how to play Ob in general. 283 at random. 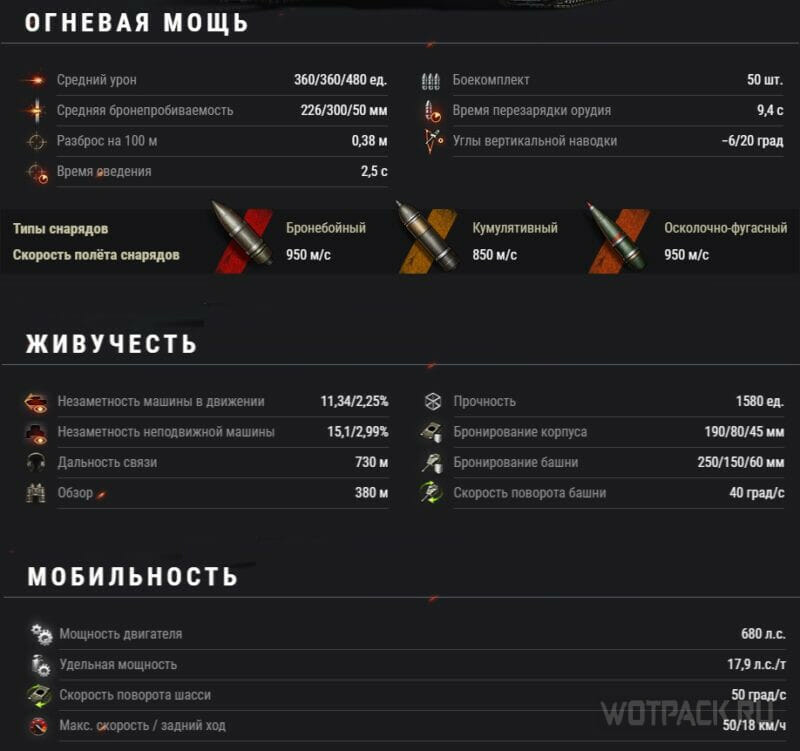 Overview of Object 283 in WoT

For comparison, we took the Soviet pumped ST, several other promotional tanks and the Swede. However, we will more often draw analogies with Ob. 430 II, since it also has a rear turret.

Available to Ob. 283 gun with a 100 mm caliber with a one-time damage of 360 units, which in principle is not bad – this is the average value for ST 9. The armor penetration of the basic armor-piercing projectile is depressing – 226 mm, so you will often have to resort to using gold cumulatives with a breakdown of 300 mm.

Mixing time and final accuracy are mediocre, not that bad, but I would like a little closer to Ob. 430 II. But unlike the rest of the ST of the USSR, it has good stabilization when turning the hull and turret, it is second only to Ob. 430 II.

With such weak characteristics of the gun, a long reload time is depressing, so the DPM is small 2399 units. However, unlike the upgraded Object 430 II, the Object 283 has:

full rotation tower; declination angles -6…+20, which means it is less dependent on the terrain and can fire from positions inaccessible to the 430 II.

The margin of safety of the equipment is minimal, but the armor may surprise you, because, unlike the upgraded counterpart, it is present here. The turret is cast, strong, there the reduction ranges from 260 mm to 300 mm of armor, so it cannot be penetrated without gold shells.

Reservation of the hull in the frontal projection:

The VLD has several armor plates (shown in the image) at a different angle of inclination, so many shells will ricochet if they hit the gun, but the lower the angle, the worse the angle. The NLD and the armor section in front of it are the most vulnerable, they will pierce often and without much difficulty.

Please note that in the frontal projection, the tank gradually becomes lower, and here the nuance is that taller opponents will be able to penetrate the forehead at a more convenient angle for them. For the same reason, it is not worth going into the clinch with the forehead of the hull, besides, it is long and it is not always possible to block the enemy’s shot with the muzzle of the gun.

Considering the rear position of the turret, it is possible to tank with a rhombus, along the sides there are screens that will become additional protection.

The maximum speed is rather low 50 km / h, but good acceleration dynamics. Due to the high specific power of 17.89 hp / t, he confidently picks up speed and holds it. Maneuverability is also good.

The stealth coefficient and the viewing radius are minimal, so it is difficult to overexposure someone.

Summing up the performance characteristics of the Object 283 can highlight the strengths and weaknesses.

In general, the technique is normally balanced, as for a tank, which, with a certain amount of luck, any player can get for free.

For this tank is preferred classic assemblywhich will pull up weaknesses and improve strengths: it is imperative to increase the maximum speed and speed up reloading, and stabilization is needed almost everywhere. 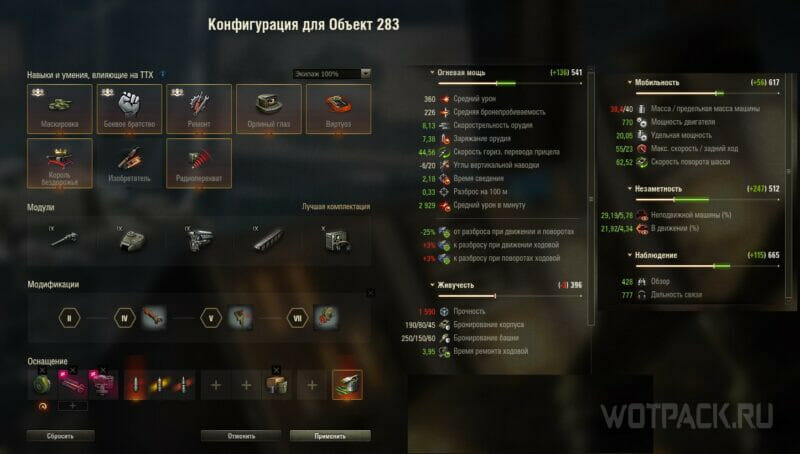 If you pervert a little, then you can use captured equipment make a sniper out of it by swinging the accuracy, aiming time and disguise to the maximum, then set:

See the results of firepower on the screen below, taking into account field upgrades. 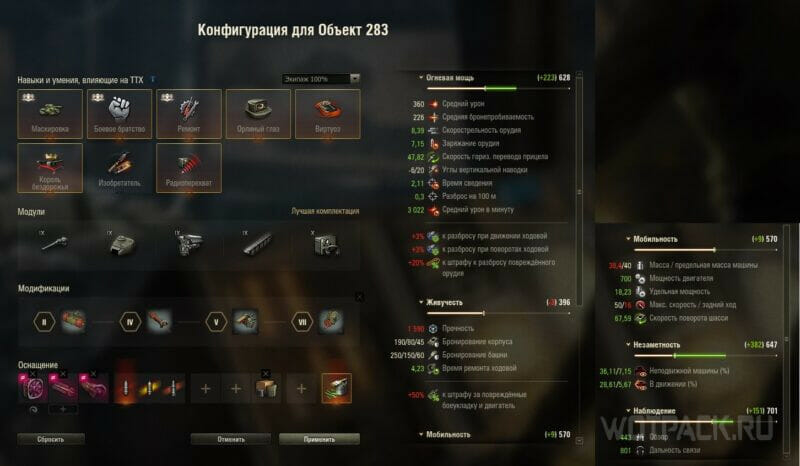 In general, this option is not recommended:

Due to the low speed of the projectiles, it will be difficult to take lead. You can just lose time and not have time to deal damage, and you won’t be able to quickly get to the enemy without a Turbocharger.

The second assembly should be considered only if you do not know the map and how to play on a tank with a rear turret. We will tell you more about the gameplay in the “How to play” section.

The tank has 4 crew members, the commander will also perform the duties of a radio operator, so the choice of perks will be standard for Soviet STs:

Based on the fact that you can try to put 2 equipment options on this tank, then the field modernization will be different. For an active game, select modifications:

It’s better to skip. On the one hand, the engine can be knocked out through the NLD, but you don’t want to sacrifice stabilization either. On the other hand, given the likelihood of engine damage, I somehow don’t want to risk an increase in the fine.
floating sight in any assembly it will not be superfluous, and the accuracy here will not hurt to tighten up.
Tuning the turbocharger will increase the reverse speed, and on this tank it is needed to roll out faster.
Comprehensive convergence acceleration – will increase the comfort of shooting, and hitting the enemy once again is more profitable than having 3% more HP. 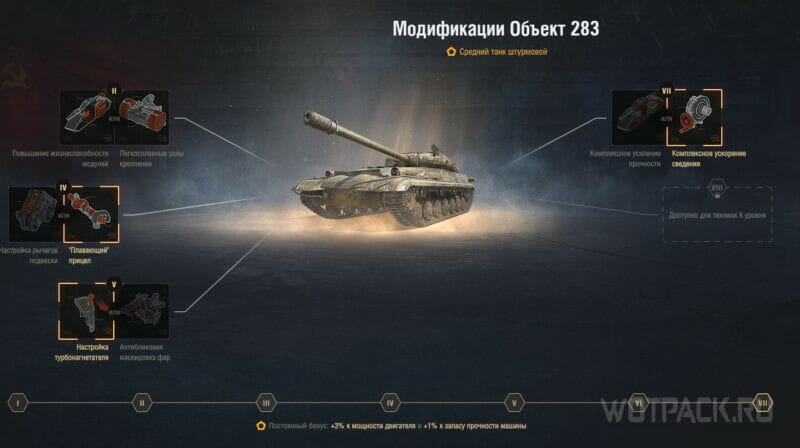 If you plan to sniper, then in the first place put “Alloy fasteners“, and in the third “Anti-glare headlight masking». 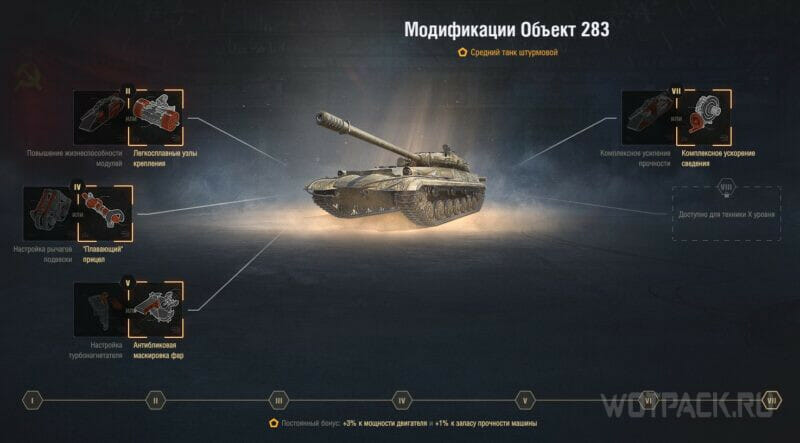 Object 283 is a support tank, so on open maps we play at the beginning of the battle at medium or close range, we look at the situation with the landscape and the departure of allies. You should definitely not try to hold the flank alone, it is better to follow the “herd” – you will live longer and have a higher chance of inflicting damage. 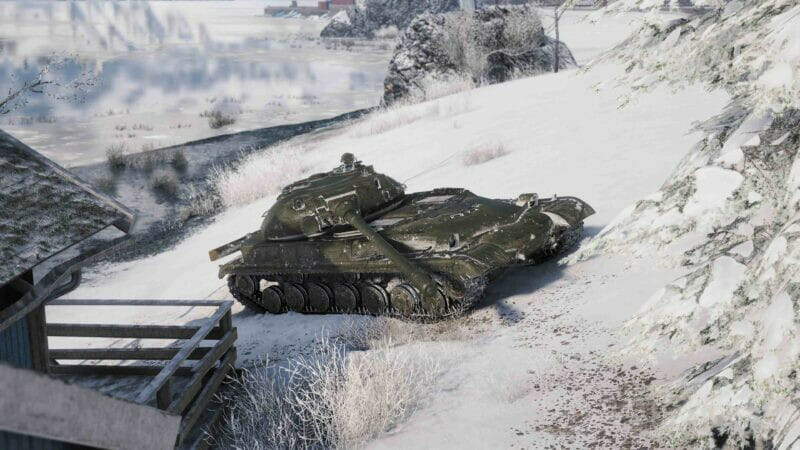 On forest/desert locations, pay attention to the terrain so that you can play with the tank’s HVL (not the most convenient) and at the same time not expose the entire hull to the enemy. This CT feels comfortable in the city – it goes backwards at a sharp angle to shoot back, just don’t twist the body, otherwise they will break through. Urban gameplay is similar to heavy duty with a rear turret.

The tank is not an imba at all, but at the same time a great option, given that everyone can get it without much strain. The technique is balanced and generally left a good impression. Therefore, do not be lazy to fulfill all the conditions in order to try your luck and get Object 283 in your Hangar.

Bloober Team: Developers on possible successors to Observer & The Medium