The final event in Fortnite: Chapter 3 is over – now the new Chapter 4 is at the start, and that brings plenty of new features in the Battle Royale long-running hit. 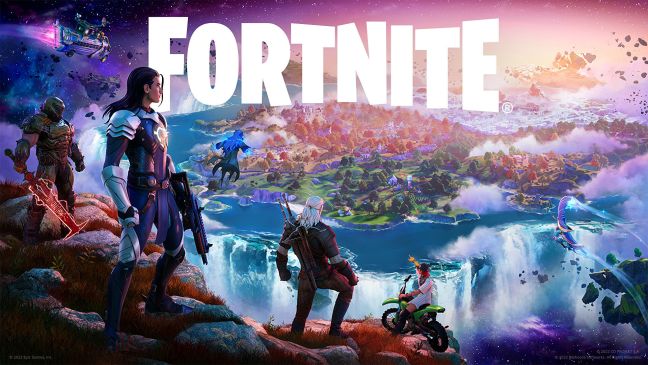 This Sunday marks the start of the new Chapter 4 in the long-running Battle Royale Fortnite. As usual, a new chapter also comes with the major overhaul of the map – and there are even more new things to discover.

Over the course of the new chapter, numerous well-known characters from other brands will make the leap to the island. First pictures and trailers allow conclusions about the arrival of Geralt von Rivia from the Witcher series as well as the Dommslayer, the Incredible Hulk and also Mr. Beast.

As for the map, there are plenty of new locations to explore, but existing players will also find familiar locations. The finale of Chapter 3 saw players coming together as they brought the various pieces of the broken island back together. It’s getting hot there again.

The starting signal for the first season of the new chapter 4 has now fallen in the evergreen Fortnite.

You can then also use other innovations that go beyond locations and characters. The most important new feature is likely to be the possibility of using motorcycles as a new means of transport in the future. You can even fire weapons from them, so that a new tactical element comes into play in this regard.

Apart from that, there is of course a whole range of brand new weapons, namely:

Ex-caliber rifle – This powerful semi-automatic rifle fires a ballistic blade at your enemies, which will then explode.
Thunder shotgun – A pump action shotgun that deals a lot of damage and fires two rounds at once. Just like lightning divides the sky, this shotgun divides your enemies into alive and dead.
Expert Automatic Shotgun – An automatic, fast-firing shotgun with average damage and medium range. True experts, however, know how to use them most sensibly.
Red Dot Assault Rifle – An automatic assault rifle with a custom red dot sight for better accuracy. This assault rifle for focused fighters features a controlled burst rate of fire.
Double magazine submachine gun – Two are better than one: This automatic, fast-firing submachine gun features a double-sided magazine for extremely fast reloading.
Tactical Pistol – This pistol is not to be underestimated. The compact size of this powerful, automatic handgun hides enormous firepower.
Schockwellenhammer – This melee weapon not only damages your opponents, but also throws them far away. But you can also use it to catapult yourself and your team members into the air.

As usual, you can find new items and further details on all the innovations mentioned in the detailed blog entry on the official website.

After the final event, Fortnite is now entering the fourth chapter.

What are the best Xbox Series X games of 2022? Dominate Elden Ring

EA Sports says who will win the 2022 World Cup: will the FIFA 23 publisher guess for the fourth time?

Nokia releases a clamshell feature phone: it even has a radio – Aroged