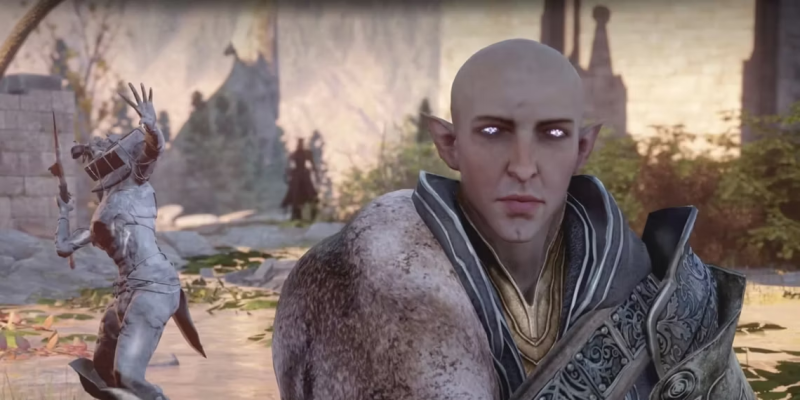 BioWare has unveiled another take on Dragon Age: Dreadwolf, giving us the opportunity to see Solas as the villain. The cutscene narrated by Varric even suggests that the fan-favorite dwarf will return as a companion again, as he says that “we” are the only ones who can stop Dreadwolf.

The animation is, of course, a little sparse in detail, and doesn’t give us any idea of ​​the gameplay or even the in-game visuals. However, it does suggest that we may see a return to the 2D animation scenes used in Dragon Age 2 when Varric told Cassandra Hawke’s story.

“I knew him as Solas, the brooding mage, obsessed with dreams,” Varric begins. “But a long time ago he had another name: Fen’Harel, the Dreadwolf. An ancient elven god of lies or a heroic rebel against tyranny, depending on which story you believe.”

Varric goes on to tell everyone the story of Fen’Harel, but any longtime Dragon Age fan is already well aware of how it’s unfolding. However, the trailer also highlights that Solas is more likely to be our main antagonist bent on destroying the world, rather than the head of a faction to join, as some fans no doubt hoped.

At the end of the trailer, Varrick says “we’re the only ones who can stop him”, suggesting that Varrick will become a playable companion. If true, then he will appear as a companion more often than any other character, as he is currently equal to Anders (Awakening, Dragon Age 2) and Oghren (Origins, Awakening). However, it is possible that he will not be part of our squad, but will simply be in Tevinter on behalf of the Inquisition, helping them stop the atrocities of Solas.

This new trailer is part of the ongoing Dragon Age Day celebrations. Unfortunately, no release date has been given for Dragon Age: Dreadwolf, so it’s entirely possible that we won’t see the game at all next year. However, BioWare says the game is in “deep” development, so we might get some gameplay trailers in the new year.

Aroged: The Callisto Protocol started from the fourth and fifth places in the Steam weekly chart

5 reasons to wear a Garmin smartwatch while sleeping