Nadia, Castiel and Arianna are currently on a sightseeing trip through the multiple planes of the gods of their universe. This time, their itinerary takes them to the Coliseum of the honorable God of War, the Trading Hall of the crooked Waukeen, and Deneir’s Academy, which should have a minimum IQ requirement. Find out all about their unlikely journey in our D&D GM Diary!

Of warrior honor, trade and knowledge 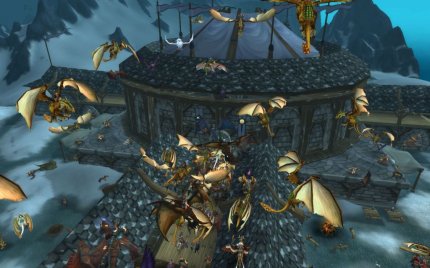 A Colosseum that many WoW fans still know: the Colosseum of the Argent Tournament in Northrend. Tempus’ Colosseum is modeled after the Roman structure of the same name – only with a pinch of magic. Source: Buffed After Nadia, Castiel and Arianna had visited the storm tower, Totengrund and forest shrine god levels, they were dropped directly in the coliseum of the warrior god Tempus. Literally right in the middle, next to two champions of this god who were fighting doggedly for victory. The stadium announcer asked the three what this trespass was about, and Castiel fervently declared, “We want to fight and win!” Although they couldn’t win, the people of the Colosseum rejoiced in the bravery and in a fight that turned out to be very exciting nonetheless. Only later did the adventurers learn that they had done the right thing, for showing cowardice in the face of danger does not go down well with the Tempurians. 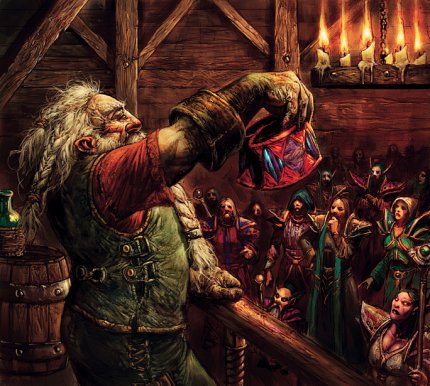 There’s nothing you can’t purchase at Waukeen’s trading halls – if you can pay for it. Source: Blizzard The fifth level, which the heroes visited, is called the Great Hall of Commerce and is the main place of worship of the Golden Lady Waukeen. There, Castiel quickly abseiled from the group after learning that an angel – one of his newest relatives! – dwells in these halls. Meanwhile, Nadia and Arianna sought out the archfey who is in charge of the trading hall. Before the two knew it, they found themselves in a beautiful fairy forest that no longer looked like a bazaar and the fairy involved them in a deal that almost bordered on blackmail: “You want to leave again and without the monsters of this forest? Make me an offer worth your life!”

Ultimately, Arianna agreed to commit to Waukeen. She had already flirted with the faith of the deceitful goddess anyway and so she was able to get a safe passage for all three in the last tarpaulin.

Deneir’s Academy is a place designed to burst the horizon. The brightest minds from all over meet there to debate, research and philosophize. The newest residents in particular, two elves from an advanced space race, tend to shatter the worldviews of lesser evolved species.

Nadia liked this place very much, not least because she met a fortune teller who could tell her about her forgotten past. Castiel, on the other hand, felt like his brain was being shattered by all the new information. And Arianna? She had been sent back to the Starsea Isles by the Arch Fairy, since she had already made her decision. So now Castiel and Nadia have seen everything and it is clear to both of them who they will join. With that we will start the next session. 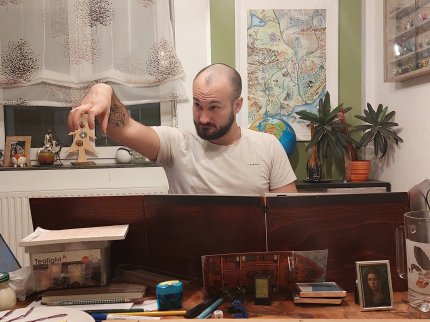 It’s been months since Dominik was behind the GM’s screen and I was on the player’s side. Even if it was short, it was a nice change. Source: Buffed Because there are only three of us playing anyway, Arianna has become a much more important part of the group as a game master than I originally planned. She’s everywhere, but usually stays in the background when I’m playing NPCs and tends to be more talkative when she’s alone with Castiel and Nadia. Because I had determined from the start that she would join Waukeen and so she could have some good role-playing moments, I swapped places with Dominik in the trading hall. He took over the game master role in this level and I “just” played my character. Of course we had discussed this in advance and I made my pictures, pieces of music and documents available to him.

Such a swap is probably something that many groups tend not to do. However, we’ve been playing together for so long, and I’ve also played a campaign with him as GM, that I didn’t believe for a second that he would take advantage of this hour of absolute power. And indeed it turned out great; his depiction of the trading hall was exactly what I would have liked! He had fun miming some shady traders and Arianna got some valuable moments for her character development.

It’s a tough decision. Which god should I join? Where do I fit best? Which dogma do I dedicate my life to? Because both of my players like multiple levels and beliefs, we’re considering awarding Paragon points. The general point reward system for the individual gods only goes up to 50. So what speaks against rendering a few services to another god after so much devotion to one god, i.e. collecting Paragon points for another faith, so to speak? It wasn’t my intention, but if the two gods aren’t at odds with each other, there’s nothing wrong with that. And for my players, this will add another facet to their gaming experience later in the game. Are you curious how Nadia and Castiel will decide?

Fortnite, Chapter 4: Where to find and how to use the Shockwave Hammer? Our guide to the new weapon

171: from Brazil the GTA clone, between shootings and thefts in the favelas

Has the existence of Metal Gear Solid Remake been confirmed by Fortnite Chapter 4?

UFC 213. Allen defeated Kattar by technical knockout in the main fight of the evening