Samsung: The next generation of Oled screens is all about health functions | NextPit

Samsung’s future displays could finally allow expanded health tracking features similar to those of smartwatches. The manufacturer recently showed off some of the promising breakthroughs of its all-in-one Sensor OLED, including features like blood pressure monitoring and full-screen fingerprint scanning.

While Apple is still figuring out how to integrate accurate blood pressure sensors into its Apple Watch, Samsung has proven that it already has a head start. Samsung Display CEO JS Choi has revealed that the company is working on a next-generation display, dubbed OLED 2.0. This screen could be ready in 2025 with revolutionary characteristics.

The Samsung official mentioned in particular an organic photodiode sensor. Basically, it’s supposed to allow the entire screen surface to scan multiple fingerprints at the same time. According to the company, this will significantly improve the level of security by 2.5 billion times compared to registering a single finger profile. 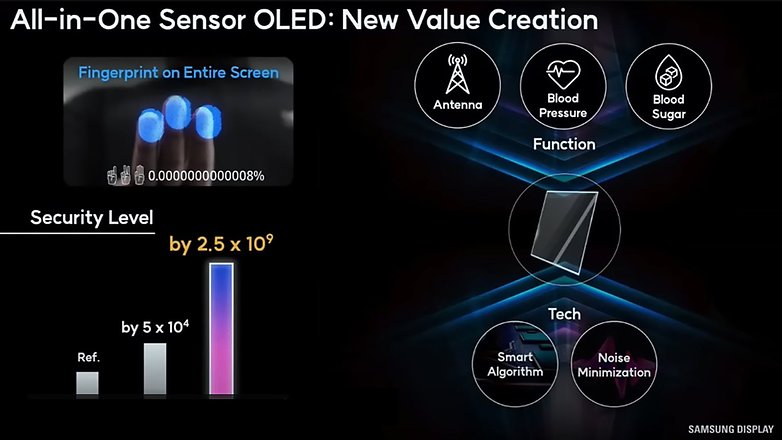 Improvements for the next Galaxy smartphones

But above all, it was mentioned that the next screens would allow the addition of biosensors to measure users’ health data, such as blood pressure and blood sugar (glucose) levels. At the same time, these screens could accommodate 5G antennas, further improving connectivity and reducing the footprint of smartphones.

Samsung hasn’t disclosed all the technical details like the accompanied methodology or how to produce accurate readings. As a reminder, the Galaxy Watch 5 Pro can read blood pressure by first requiring an external monitor for calibration. Ultrahuman’s Cyborg M1 glucose monitor that my colleague Stefan tested uses a non-invasive needle to track the user’s metabolism.

Apple is also expected to launch a watch capable of reading blood pressure. The two recent patents indicate the various ways Cupertino could implement such technologies.

Do you think this is an important feature before buying a smartwatch or wearable?

Past the checkout. 5 world-class football players who have not played in the World Cup

God of War Ragnarok, players hunting for a tooth of Thor: the funny detail

Xbox will also have to guarantee the release of Fallout and The Elder Scrolls on PlayStation, analyst says

The DioField Chronicle: announced a free update with missions, New Game + and a new mode

Xbox Store: These games + discount are new to Xbox