The Callisto Protocol is a game from Glen Scofield, the game designer who pioneered the Dead Space series, founded Sledgehammer Games, responsible for some of the Call of Duty series releases, and most recently moved to KRAFTON as head of the Striking Distance Studios team, where took up horror, suspiciously similar to Dead Space.

It was originally planned that The Callisto Protocol would take place in the PUBG universe, but later the authors abandoned this idea. After several years of development, with the involvement of such famous actors as Josh Duhamel (Transformers), Karen Fukuhara (The Boys) and Sam Witwer (Star Wars: The Force Unleashed, Days Gone) to the main roles in the game, the project reached the release – as turned out to be a bit premature. 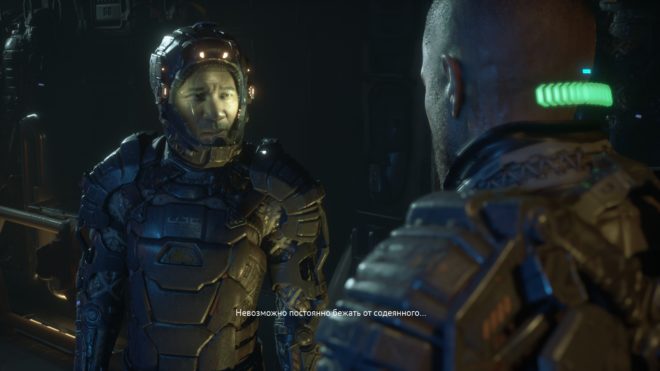 On the day of release, the title turned out to be practically unplayable on the PC. Even on the top systems, the game froze and crashed, which dropped its rating on Steam to “negative”. On the Xbox Series X, there were no RT reflections in quality mode, and fps periodically sank below a stable 30/60 fps. The PlayStation 5 version proved to be the most optimized, and even a few days after the launch and the release of several patches that increased the user rating of The Callisto Protocol slightly, the PC and Xbox Series are still experiencing performance problems.

Well, that’s not the only drawback of the game. Take even the plot: come up with the most banal story about an outbreak of a virus that turns people into bloodthirsty monsters – and you get the script for The Callisto Protocol. No Lovecraftian motifs from Dead Space for you – here the plot is much more straightforward and simple, without frills. A charming hero who does not understand anything, and a tough partner who, on the contrary, knows a lot, are attached. 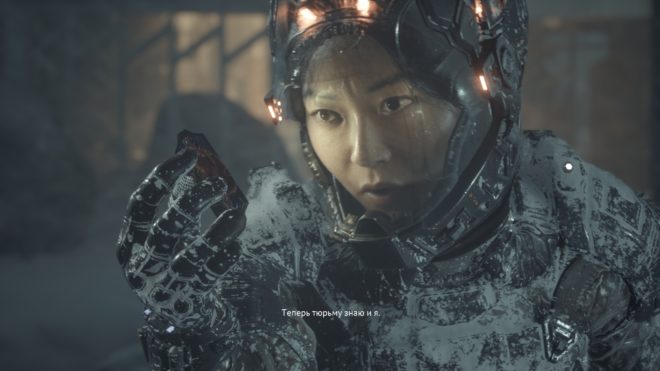 At the same time, the detailing of the characters, facial animation and the overall level of graphic performance in the game is beyond praise. You will see the smallest changes in the facial expressions of the characters, drops of sweat flowing down the neck of the protagonist, and all the disgusting growths on the bodies of the monsters that you encounter. Thick fog shrouds the corridors of the space prison, severed limbs splatter blood, and the snow-covered area is covered with traces of battle. Incredibly beautiful, in terms of the visual component, the game is able to outdo many AAA releases of 2022.

The only pity is that the authors of The Callisto Protocol have not been able to come up with interesting locations, and most of the time you will explore inexpressive levels, consisting of metal and … metal. Of course, the prison should not delight with amazing landscapes, but still the game lacks memorable views. Even the scene here is not played out as often as we would like: you will get out to the surface of Callisto a couple of times, admire Jupiter, dive into a snow storm, but spend the rest of the time in featureless corridors. Ishimura in Dead Space was more interesting, not to mention the space station on Titan in Dead Space 2. 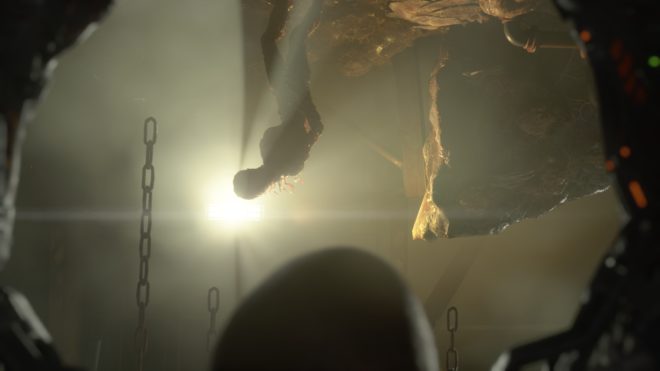 In addition to boring locations, the player is haunted by another scourge of the title – downloads disguised as narrow passages and ventilation holes into which the main character squeezes. There are a lot of them here, which is really annoying. Especially when you consider that the game does not have a mini-map and a compass with a direction mark, and an inattentive gamer who does not pay attention to visual cues will definitely get lost, turn off somewhere, spend a lot of time looking for the right path, which is exacerbated by many leisurely animations. That’s still a pleasure.

Not impressive and obsessive attempts to catch up with suspense. The Callisto Protocol somehow tries too hard to scare, and somehow it backfires. That is, the tricks are so banal and boring that the player understands in advance that there will be a screamer soon – for example, when he sees a flashing light in the corridor or hears noise somewhere around the corner. There are also less obvious entries, like facehuggers jumping out of the box. The first time you can jump in surprise, but on the fifth or sixth time you feel nothing but irritation. 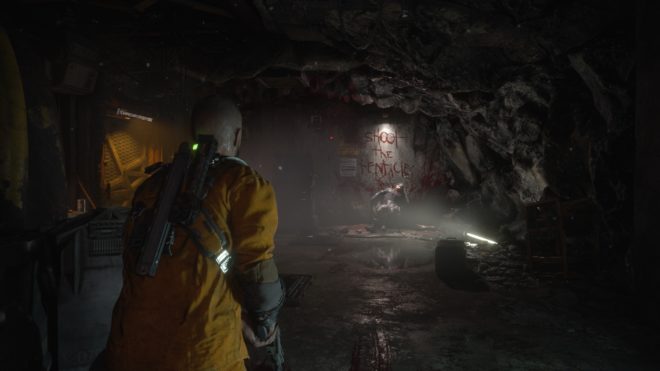 In addition, all this has already been in the Simpsons Dead Space, and therefore the game can hardly be called scary. Monsters are more nasty than creepy, and they embody the standard set of horror games like Resident Evil 4 and Dead Space: wall-climbing spiders, regenerating and mutating freaks, exploding monsters that strive to sneak up as close as possible. There are blind infected here, reminiscent of the clickers from The Last of Us: in theory, they should motivate the player to move as quietly as possible, but they turned out to be so helpless that they can be called the easiest opponents in the game – you will discreetly cut monsters one by one directly under the nose of their comrades.

However, you can’t go through the whole game in stealth mode. In contrast, The Callisto Protocol puts a lot of emphasis on the combat system, and in particular on aggressive hand-to-hand combat. Armed with a shock baton, the protagonist arranges a bloody massacre for his enemies – although here you are lucky: a meeting with two or three opponents at the same time can lead to an inglorious death. 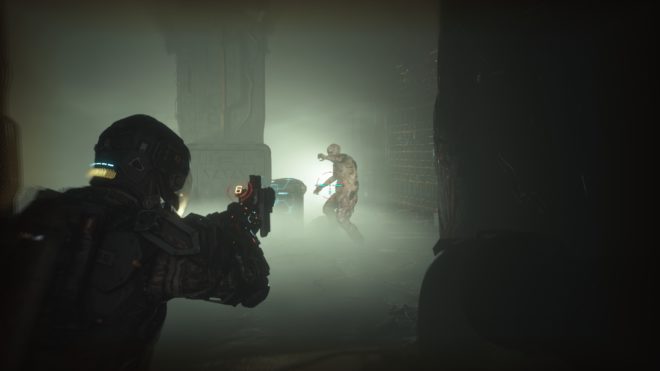 The player has several tricks and combo attacks, as well as an unusual system of dodging attacks: you need to deflect the gamepad stick to the sides so that the character automatically dodges, or step back to block. Out of habit, it’s not very convenient, but if you don’t master this system, you will have a hard time.

Also, the hero gradually acquires a firearm, although there are not very many of them in the space prison: two types of pistols, two shotguns and an assault rifle. Weapons can be upgraded by increasing damage, expanding the magazine and adding alternative attacks, but still more often you will have to rely on the good old club; in the midst of a fight, trying to reload the barrel or take another gun can cost a life – the animations for changing weapons are very slow. 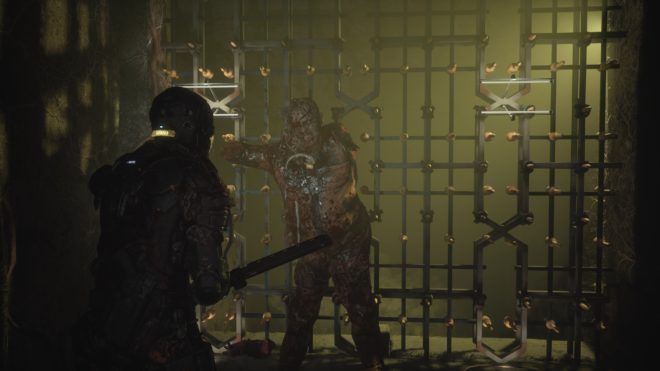 The tactical dismemberment of monsters from Dead Space works here too: you can shoot off the infected hands and feet, and then finish them off in melee. A hit in the head does not guarantee the successful destruction of the enemy – everything is according to the canons. In addition, the arenas often contain environmental elements that can be used to kill the enemy, such as sharp stakes or rotating fan blades. The Gravity Glove is used for this, although it does not become the ultimate tool due to the limited battery power.

The combat in the game is not perfect, but quite fun and spectacular. She, and also the graphics and some kind of atmosphere of space horror – these are the aspects due to which it is worth paying attention to The Callisto Protocol. The rest of the game feels weak, and definitely doesn’t surpass the grandeur of its famous progenitor.

Given the difficult situation with the purchase of digital copies of games in Russia, we recommend that you take a closer look at the Videoigr.net store, where you can buy The Callisto Protocol on disk.

Lack of suspense and horror

PUBG: Battlegrounds arrives on the Epic Games Store, here is the date and time

VIDEO. It won't work like that anymore. 16 years ago Ronaldinho cleverly scored against Werder Bremen

PS5: the best console game is at a bargain price thanks to an Amazon flash sale! GOTY 2022 alert!